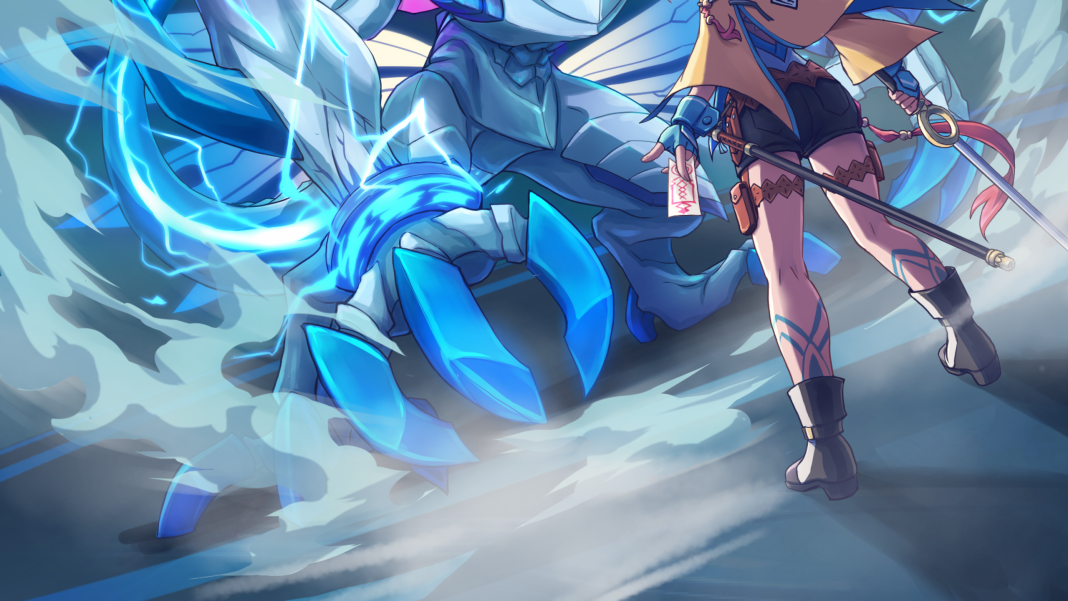 The biggest change for veteran players will be the fact that you actually play as newcomer Kirin for the most part. You do unlock the ability to play as Gunvolt soon into the game, but he serves more as a very overpowered alternate character you can swap to when you need some help rather than a full playable character. He accompanies you as a dog and can be summoned once his gauge fills up enough. Kirin feels superb to play with talismans and melee attacks. While the initial sections might seem a bit weird, you will get into the groove quickly and start using talismans to tag enemies before unleashing melee attacks and warping to enemies. After some well-implemented tutorials and dialogue explaining things through the early levels, I got into a fantastic rhythm with the Arc Chain warping, reloading talismans, and more.

As Kirin, you end up learning new abilities from bosses, but also unlock collectible summons and passive abilities that use a gacha-like system. You unlock these by collecting Image Chips across the stages. Once you collect these and unlock Image Pulses, some can even be enhanced, while others give you useful abilities. I initially thought this system would turn me off, but I quite like how it encourages replay value. The additions aren’t gamebreaking, but they are nice to have and allow for more customization in runs through the stages.

Speaking of the stages, Azure Striker Gunvolt 3 is very accessible for the most part. There are multiple checkpoints, but a few annoying portions of stages. These only bothered me in two stages thankfully. The rest of the stages are excellent across their visuals and enemy placement. The aforementioned Image Chips are also usually hidden so you won’t find them all on the critical path. I love the boss battles barring one that I won’t spoil, and the team has done a great job with just about every encounter in Azure Striker Gunvolt 3. Bosses changing things up with each health bar acting like phases to some degree also helped keeps things fresh.

Visually, Azure Striker Gunvolt 3 looks brilliant. It has gorgeous animation and spritework accompanied by rock solid performance on Xbox Series X. I like the new character designs and portraits quite a bit. My only performance-related complaint with Azure Striker Gunvolt 3 is with how load times are longer than I expected on Xbox Series X. This game definitely feels like flex on Inti Create’s part with its art direction and animations across the board.

On the audio side, the soundtrack is full of catchy tunes, but the new vocal songs are the real stars. Voice acting is available in both English and Japanese, with both options being worth checking out. I am glad to see Inti Creates bring in an English dub for this game, and hope future entries continue to offer dual audio options to make it more accessible. Now that we have an Azure Striker Gunvolt trilogy, I hope we get some vinyl soundtrack releases in the future for a compilation of the best songs in the series at least.

Over the years, it has been disappointing seeing many games mention Xbox Series X|S in addition to Xbox One in promotional trailers end up being just Xbox One games running in backward compatibility. When Azure Striker Gunvolt 3 showed up as optimized for Xbox Series X|S on my dashboard, I was curious what enhancements it would have. The game looks excellent, but I was surprised to see the 120fps frame rate option. My monitor only lets me do 1080p 120fps, but it was great seeing Inti Creates go the extra mile for Xbox Series X owners who have newer monitors or TVs. The rumble implementation is also well done in Azure Striker Gunvolt 3 on Xbox.

I have a few issues with Azure Striker Gunvolt 3 in its current state. There are many instances where the dialogue boxes will obscure important parts of the screen. You can disable this in the story mode+ setting, but it will not be an option if you are using Japanese voices and wanted subtitles. The other issue I have, is the story itself isn’t anything special. The voice actors, voice direction, and characters are very good, but the story itself isn’t anything special. I like Kirin’s design and her gameplay a lot, but the story didn’t do anything for me. It would also have been nice to have the move list accessible during the stages rather than only before you begin a stage in the hub.

Hopefully my Azure Striker Gunvolt 3 Xbox Series X review helped you decide whether this series is worth your time with the trilogy now available on Xbox platforms. I will also be covering the first two games soon. I can’t wait to see what the team does next, and hope we get some DLC characters for Azure Striker Gunvolt 3. This is definitely one of my favorite side-scrolling action platformers, and an essential for Xbox Series X owners who enjoy the genre. If it does well enough, it would be great for Inti Creates to do an Xbox physical trilogy release in the future as well.