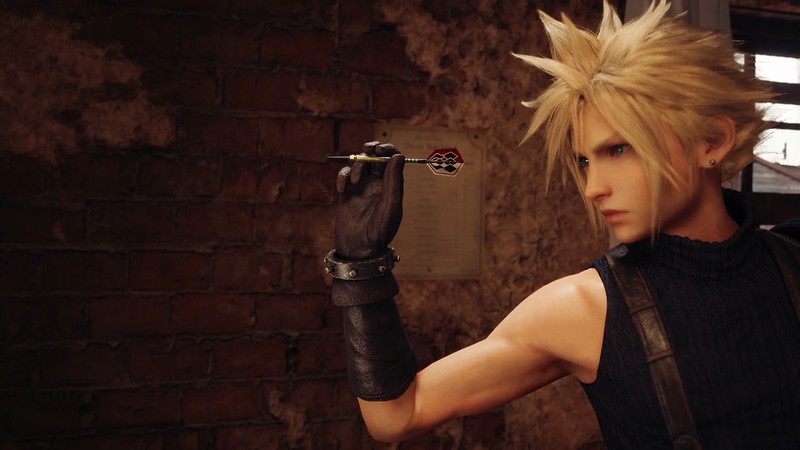 Final Fantasy VII Remake is full of many mini-games. Many of these are fun and easy but some of them are a bit harder if you want to unlock all the rewards. This guide will cover the mini-games you encounter in the first half of the game with tips on how to unlock the highest tier reward.

You get access to darts early on in Final Fantasy VII Remake. Your aim in darts is to score enough to reach the highest position on the darts leaderboard. You do this by positioning your target a bit higher than your desired location on the board. Press the action button only when you see the target reticule close in to the desired position on the board. This will ensure you get a higher score for a particular round. You can attempt this multiple times so don’t be afraid to practice a few times. Your aim is to hit the bull’s eye or the double and triple rings that are narrow on the dartboard. The ultimate reward here is a Luck Up materia.

Squats are a little harder than darts because you need to get into a rhythm to be able to beat the hardest challenge. Switch off the sound while doing this so you aren’t distracted by any dialogue or music. Pay attention to Cloud’s movement and the button prompts in the beginning. Your aim is to get into a rhythm of pressing the buttons in the same order. Pressing too early will result in Cloud falling over and costing you valuable time. You then need to slowly press the buttons a bit faster. This is another game where you might take a few attempts to finish off the challenges if you aren’t used to rhythm games. The final challenge took me about five attempts before I got the trophy. You might find it a bit difficult early on if you don’t play rhythm games regularly so don’t worry and keep practicing.

Try and attack the red boxes when you see one for adding time to your time limit. Use your skills when you see larger boxes because some of them are obstacles that block other boxes. Your aim is to get as high a score as possible here. Blue boxes fill up your ATB gauge quickly so pay attention to them.

As you complete more research for Chadley, you unlock VR missions. These let you earn summons for battles. VR mission summon battles are quite difficult so make sure you’re prepared. Early on, you will get the chance to take on Shiva so equip fire materia and make sure you have Ifrit equipped as he helps a lot during this battle.

The dancing mini-game in Final Fantasy VII Remake is probably going to be the hardest for you if you aren’t familiar with rhythm games. You need to pay attention to colour trails and the cursor here. While Cloud is dancing, the cursor flies all over the screen but changes to a specific colour representing one of the DualShock 4 face buttons. Once you see the trail change colour, rest your finger on that button and get ready to press when you see the trail lead into the target and the cursor aligns with the target. You can practice this often and you absolutely should because the actual dance mini-game goes on for a good amount of time and it becomes faster as time goes by.

Hopefully these help you out in the first half of Final Fantasy VII Remake on PS4.