The Mako Reactor
Home Reviews Mario and Sonic at the Olympic Games Tokyo 2020 Review: One of... 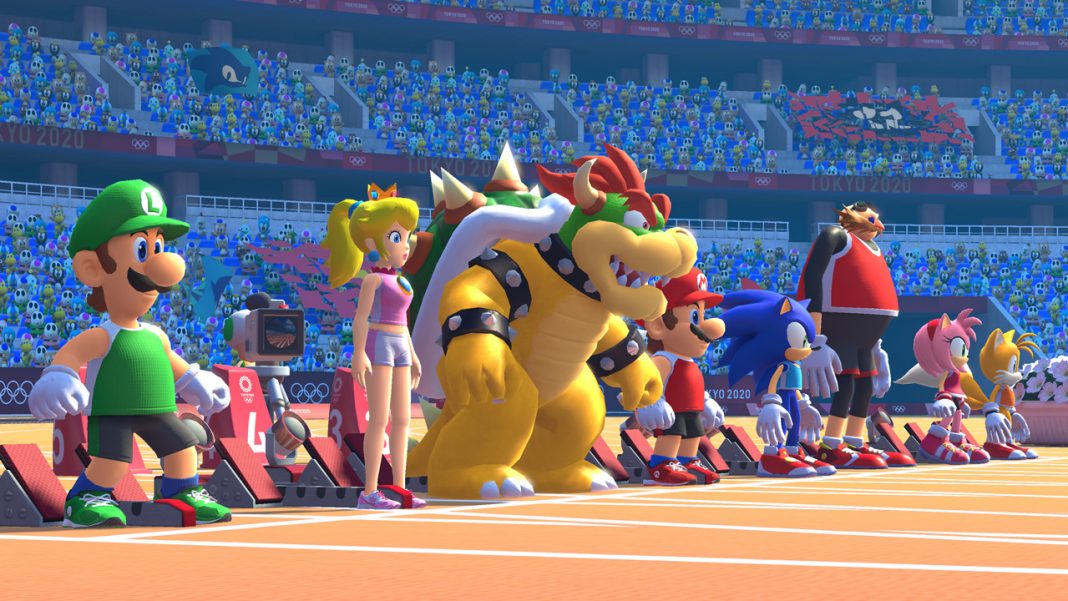 Unlike most party games, Mario and Sonic at the Olympic Games Tokyo 2020 includes a story mode in addition to other modes like a quick match mode, local play, and online play options. Online play includes ranked and unranked modes with leaderboards. Quick match mode lets you setup solo or multiplayer (local) sessions of events from the 2D, 3D, and Dream Event sections.

New to the Mario and Sonic at the Olympic Games series is a story mode included. While story modes in games like this often tend to just be an excuse to introduce you to the various events available, the one in Mario and Sonic at the Olympic Games Tokyo 2020 is very good. The developers have paced the story and gameplay segments of the story mode very well. You never get bored by too much dialogue or are forced into multiple events in a row. The story progresses and splits up into 2D and 3D segments which serve as a nice break from each other.

Sega has scattered various pieces of trivia from not only the Olympics but also the Mario and Sonic games here. The story mode will take you about six hours or less to finish depending on how many times you have to retry certain events. If you fail an event thrice in a row, you can skip it. You can replay the new story specific mini-games later on as well through the gallery or records mode which the game calls My Data mode.

The premise is that Dr. Eggman has created a retro game console called the Tokyo 64 that he wants to trap Sonic and Mario with. Things don’t all go as planned and Bowser, Toad, Dr. Eggman, Sonic, and Mario all get sucked into this retro console. This is where the 2D events come into the picture. The aforementioned characters all try and find a way out by competing in the Tokyo 1964 events while Luigi and others take part in events set in the Tokyo 2020 Olympic games.

A majority of the events are controlled by a single analog stick and the A button while you use R to boost or perform a special move. Some events force motion controls which is annoying because why have so many control options if you still force people into motion controls even if an event is being played on the Nintendo Pro Controller that has a lot more buttons than a single Joy-Con. This makes sense for split Joy-Con play but really shouldn’t be forced when players have access to more buttons. Thankfully, you can get by without motion controls for the most part in the other events.

There are more than 30 events included across the 2D, 3D, and Dream Events. Dream Events that are events that don’t follow the laws of physics and are like supercharged variants of modes in Sonic and Mario franchise games. Events like the Rugby and Badminton ones are good enough to be fleshed out into their own full games eventually.

Visually, Sega has nailed it with Mario and Sonic at the Olympic Games Tokyo 2020. The 3D and 2D events look great and run very nicely. Even the exploration portions of the story mode are fun. The developers definitely went the extra mile with proper animations for the 2D mode to match the original games and even have Sonic and Mario match up run animations to the older games when you hold down the run button. The only real issue with visuals is the lack of anti-aliasing that results in a lot of jagged edges. This is sadly the norm with most Nintendo Switch games.

There isn’t much voice acting here with most characters just using monosyllabic sounds or saying a word or two. The dearth of voice acting is noticeable but not really an issue. Music on the other hand is very good. There’s a nice combination of eastern and western instruments with the main themes and the 2D segments have chiptune versions of said songs and themes. The 2D mode in general feels like a very well thought out mode that will please any longtime players of either Mario or Sonic the Hedgehog franchises.

Mario and Sonic at the Olympic Games Tokyo 2020 has a few issues. The first related to the controls in some events that force you to use motion controls. Discus throw would’ve been great but the implementation of forced motion controls is really annoying. While I really enjoy almost all the events, not having a mode where you can queue up multiple events for a custom tournament is a missed opportunity. This will make you waste time when you’re playing with friends. The last issue the game suffers from is in the story mode. There’s no way to skip text or cutscenes which sometimes flow very slowly.