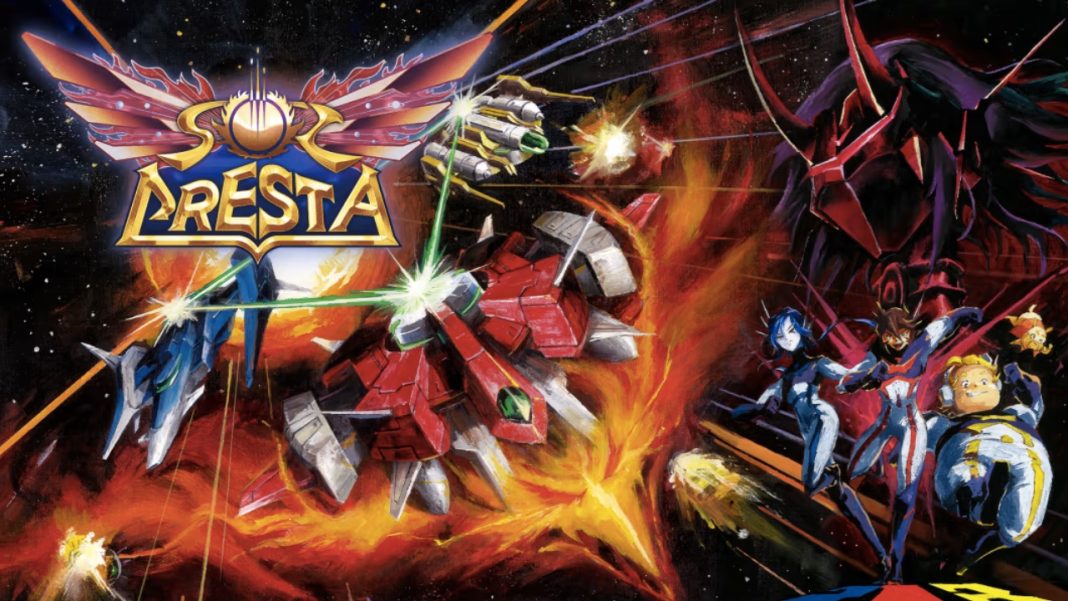 Projects that start out as April Fool’s Day jokes are usually very interesting. These are usually prototypes that end up being built upon for something better, with some even resulting in surprisingly great experiences. Yakuza: Like a Dragon is the best example of an April Fool’s Day joke becoming something amazing. When PlatinumGames revealed Sol Cresta in partnership with Hamster, I was cautiously optimistic. Fast forward to today, Sol Cresta is finally here after a delay. Having spent time with it over the last week on Nintendo Switch, I’ve come away mostly impressed, but it is held back by a few unfortunate annoyances.

Having avoided most gameplay trailers and information for Sol Cresta to discover things on my own, I’ve grown to adore the core gameplay mechanics (and the music) in PlatinumGames’ newest project. While it initially may seem like a regular shoot ‘em up, the docking and scoring mechanics got me coming back to Sol Cresta every few hours since I initially downloaded it. I tested out the easier difficulty options as well to see how accessible PlatinumGames made Sol Cresta for newcomers, and they did a great job here. If you’ve already played shoot ’em ups before, I’d recommend sticking to normal from the start though.

Before getting into the gameplay mechanics and why I ended up loving even the system that I thought would feel tacked on, Sol Cresta has an interesting unlock system. Initially, you only have access to the basic mode. As you complete more stages and fulfill various requirements for achievements, you start to unlock more in-game content like the sound test for listening to the music and the time attack mode. There doesn’t seem to be anything indicating the presence of important unlockable content like this in-game. Either way, you will only take a little bit of playing to unlock these in addition to the online leaderboards that were another surprising thing locked behind progression.

PlatinumGames calls the system at play in Sol Cresta ‘free-form docking’. You control the Yamato in Sol Cresta which is composed of three fighters that have their own attacks. You initially start with just one, but collect the others slowly as power-ups in addition to shields. As you grow to all three, you can start using different formations for special attacks. The formations can be used once your SP gauge has filled enough and once you collect the necessary formation as a power-up to unlock it. You can then press a button to initiate the formation process and then move into it to start attacking with the new ability for a limited time.

As you get through enemies, bosses, and collect more Sol Medals, your Sol gauge increases. This gives you new abilities and buffs. The abilities are very interesting because some of them have fighting game style inputs to execute special attack patterns. I thought this would feel tacked on at first, but it is well thought out. It just took me a bit of playing to learn what pattern is used for what skill. The buffs range from speed and attack boosts to shields and more. All of this is displayed on the right of the screen at all times while the left has the formations and the SP gauge.

Visually, Sol Cresta feels a bit inconsistent. I love the ship animations and enemy designs in some of the later stages. The environments can look good, but the early stage backgrounds don’t feel like they got as much care as the rest of the game’s visuals. The boss designs are very good and I adore some of the visuals on display during special moves in boss battles. Without getting into spoilers for the stages, I enjoyed the last 3 stages a lot more than the initial ones when it comes to not just visuals, but also enemy placement and patterns.

One thing to note is that Tate Mode, while available, isn’t ideal initially. You will need to get used to the interface with the normal orientation first before getting comfortable enough for using Tate Mode considering how much the Sol Gauge displays normally. My main annoyance with the visuals is to do with the filter options. Considering Hamster is involved with Sol Cresta, I was hoping for a robust filter suite, but the current implementation leaves a lot to be desired. I hope this can be improved in future updates.

On the Nintendo Switch, Sol Cresta has some noticeable technical issues. It seems to have frame pacing issues (more noticeable when docked) and slowdown in specific situations. Boss encounters usually result in the screen freezing for a second or two before the boss appears or starts attacking. I also ran into slowdown issues on both my Nintendo Switch OLED Model and Nintendo Switch Lite while playing Sol Cresta. Hopefully these issues can be resolved in future updates. It also didn’t help that the Nintendo Switch version I’ve been playing has long load times in between stages compared to other shoot ‘em ups on the platform.

Barring the issues mentioned so far, I feel like the pricing could’ve been better. Having a story with voice acting penned by Hideki Kamiya sounds great, but it is locked behind an additional DLC purchase for what is an expensive game in the first place given the genre norms on Nintendo Switch. If the current asking price also included the Dramatic DLC, the overall package would’ve been more appealing to newcomers and not just PlatinumGames fans. As of this writing, I don’t have access to the Dramatic DLC, but I will be buying it and playing it at launch.

In its current state, I’m addicted to the core gameplay in Sol Cresta. The Switch version needs optimization and fixes because the slowdown and freezing is disappointing in a game like this. Barring that, I hope future patches can do a better job at explaining the mechanics of the game to newcomers to the genre. I adore the shoot ‘em up genre and had no trouble getting used to things, but newcomers will likely be turned off by the vague unlock and progression system. Hopefully PlatinumGames can build on this through patches, because I really love the core gameplay. I just hope the overall package gets the same care put into it in the future and look forward to playing the Dramatic DLC when it releases.