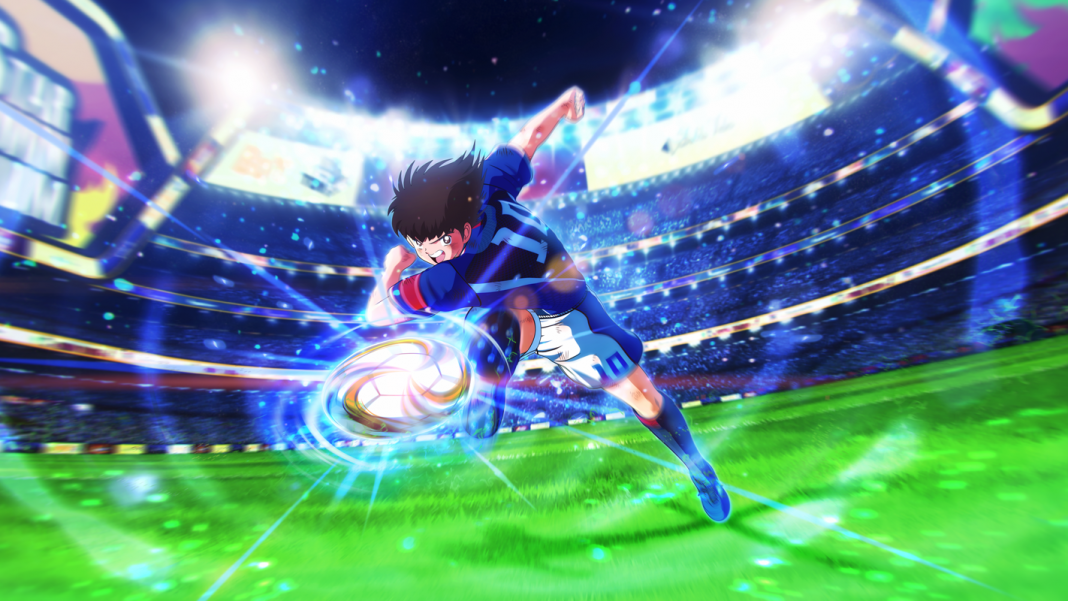 Captain Tsubasa: Rise of New Champions is the newest licensed anime game from Bandai Namco Entertainment. It is developed by Tamsoft who previously did Onechanbara Z2 Chaos and the Senran Kagura games. Captain Tsubasa: Rise of New Champions is an arcade football game that has equal parts anime and football. As with most anime games, I was skeptical about this release but it has surprised me quite a bit in my time spent playing it online and offline and I can safely say that this is one anime game you don’t want to miss.

Before getting into the modes and gameplay, Captain Tsubasa: Rise of New Champions isn’t something you cannot enjoy if you aren’t familiar with the source material but knowing even a little will definitely help. The only aspect of the game that isn’t welcoming to newcomers is how quickly different characters are introduced. It does a great job of introducing mechanics, showcasing important story cut-scenes, and generally showing you what you need to know during the story mode.

Captain Tsubasa: Rise of New Champions’ story mode called The Journey is split up into two parts. The first is Episode Tsubasa that focuses on the story from the National Middle School Tournament arc of the Captain Tsubasa story featuring some of the most memorable matches. This is split up into various visual novel-like story beats with in-engine cut-scenes and multiple football matches. I was very impressed with how reactive this mode is with adapting to how you score and how outcomes play out. You obviously need to win matches but the developers have done a fantastic job with sprinkling epic moments (that are missable) from the anime during matches once you fulfill specific requirements.

The second story mode is Episode New Hero which is a mode you should play only after completing Episode Tsubasa because of the difficulty. This mode lets you create your own character and join one of three schools to begin your own journey alongside the famous characters from the show. This mode is meant to be replayable because you raise your character stats differently based on character position and have three different storylines to experience.

This story mode is much longer than Episode Tsubasa. Depending on how well you play, expect about 20 hours of story content in Captain Tsubasa: Rise of New Champions. I was surprised to see the Episode New Hero even include original anime cut-scenes in addition to the in-engine ones. The developers did an excellent job with both these story modes. The one story mode issue I have is that failing a penalty shootout will force you to replay the whole match and not just redo the penalty shootout. This feels like a waste of time.

As you progress through the story mode, you unlock many memories for Tsubasa that you can watch later. These are basically a way for fans to reminisce about key points from the Captain Tsubasa story through well edited cut-scenes and storyboards and also a way for newcomers not feel lost since these serve as backstory for those unfamiliar with the story.

The gameplay in Captain Tsubasa: Rise of New Champions is like an arcade football game with certain RPG mechanics thrown in and a lot of depth. The controls take a good amount of getting used to and I definitely recommend spending time in the practice mode to learn the ropes here. The flow of each match involves the usual passing, dribbling, and shooting but the spirit gauge and tackling are a huge part of Captain Tsubasa: Rise of New Champions’ basic mechanics.

Each character has a spirit gauge that fills up over time and this decides your sprinting, special moves, and more. As the game progresses, a bar at the bottom of the screen fills up. This is the V-Zone bar that boosts your whole team for a limited amount of time letting everyone recover spirit quicker and be able to charge shots faster.

Barring keeping track of your spirit gauge, tackling and dodging play another  important part here. When you’re on the defense side, you need to tackle opponents who try and dodge you. These two systems work like a game of clash and you need to quickly judge whether to sprint to steal the ball or tackle your opponents. The combination of systems seems daunting initially but the good set of in-game tutorials help a lot.

Scoring goals in Captain Tsubasa: Rise of New Champions involves depleting the goalkeeper’s spirit gauge by shooting and using powerful skills. The goalkeeper’s spirit gauge doesn’t refill until half time or until a goal has been let inside. Captain Tsubasa: Rise of New Champions definitely wants you to play aggressively and rewards you with some super stylish animations and cut-scenes for scoring and attempting to score.

For multiplayer, Captain Tsubasa: Rise of New Champions includes support for up to four players locally in versus matches, penalty shootouts, and tournaments. Online, there is support for ranked league matches with your team and unranked matches through creating and joining rooms. Over the last few days a majority of my online matches ran smoothly but I did have the occasional match where things became laggy. This is when played on a PS4 Pro with a wired Internet connection.

Fulfilling certain challenge requirements will net you Play Points. You can use these to buy card packs that contain training items and friendship cards. The training items are consumables used in the Episode New Hero story mode to give you buffs during a match. Friendship cards let you unlock friendships to learn new moves here. These play points and card packs are not sold with real money and you can only earn and unlock these through progression and playing the game.

Visually, Captain Tsubasa: Rise of New Champions is one of the best looking anime games with its cel-shaded aesthetic and superb animations that are full of particle effects. Yoichi Takahashi’s character designs have been brought to life here in a way that does both the anime and manga designs justice. On PS4 Pro, the game targets 30fps during gameplay and I didn’t have any performance problems during the actual matches. There is no option to play at a higher resolution or frame rate in the options like there is for some PS4 Pro games.

There are some cut-scenes where it feels like the game is running at an uncapped frame rate though and this adds some inconsistency to the performance. The one area I am disappointed with is loading. There are a bit too many loading screens and some take longer than they should. Hopefully these can be addressed in patches.

On the audio side of things, Captain Tsubasa: Rise of New Champions has an original soundtrack that includes epic orchestrations and is mostly full of upbeat music that fits the over-the-top adrenaline rush well both in and out of matches. Voice acting is only available in Japanese and the cast does a great job with the varied roster of players and NPCs.

While there’s a lot to love about Captain Tsubasa: Rise of New Champions, it has some issues in its current state on PS4 Pro. Since the game is only voiced in Japanese, subtitle issues are a problem. During some cut-scenes the subtitles become partially invisible or blend too much into the environment. The other big issue is that the story mode crashed for me twice in my time during Episode Tsubasa making me replay the whole match both times. Once these issues and the load times can be fixed, this will be one of the best anime games of the generation.