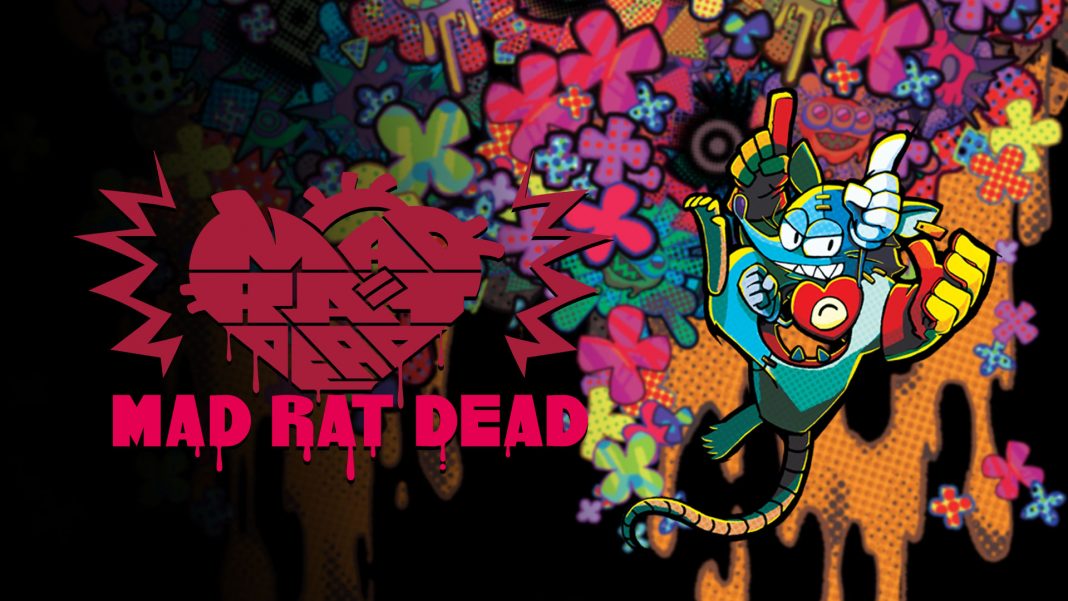 Mad Rat Dead is a rhythm platformer by NIS in Japan localised by NIS America for PS4 and Nintendo Switch where you play as a lab rat trying to take revenge on humans. It is one of the few NIS games to get a worldwide release and I’ve been playing it on Nintendo Switch. While the initial premise seemed interesting, every new bit of information has piqued my interest with not just the excellent music but the stylish visuals.

Yomawari’s Yu Mizokami directed Mad Rat Dead and this game couldn’t be more different than the atmospheric horror experience in the Yomawari games. As a lab rat, you are granted one last chance in your final day by the Rat God to exact revenge on humans for locking you up in a cage. As the Mad Rat, you have your heart as a partner as you try to traverse through unique and difficult stages full of platforming challenges that revolve around you maintaining rhythm alongside the music.

Mad Rat Dead’s Play mode takes you through the levels of the story that are separated by cut-scenes with some dialogue. After you finish a stage in Play mode, you can replay it in the Stage Select mode and even change the song. Stage Select also includes a Hard mode that adds more notes to increase the challenge.

As Mad Rat, you go through levels by dashing, jumping, diving, and attacking for the most part. Some areas require charged dashes to overcome larger distances. The core gameplay in Mad Rat Dead is very good but I feel like the attack portions are tacked on. They break immersion while maintaining the rhythm as compared to other games that blend rhythm gameplay with other genres like Crypt of the Necrodancer. Barring these parts of the levels, Mad Rat Dead is very well designed and I found myself replaying older levels to increase my rank and max combo.

Barring the Play and Stage Select Modes, there’s a Sound Check mode which lets you listen to the music you’ve unlocked in-game and even practice maintaining your rhythm in those songs. Mad Rat Dead is one of the few games on Nintendo Switch to have its own trophy system with its own in-game interface. You can check your unlocked trophies from the main menu. This is likely carried over from the PS4 version but it is good to have nonetheless considering how few games on the system bother bringing over achievements or trophies from other platforms.

Mad Rat Dead is a very unique looking game. It blends colourful and cartoony visuals with very stylised animations. The character models are great and the developers have done a fantastic job with the overall feel of the menus and animations in-game. Mad Rat Dead also looks great both docked and handheld. Performance isn’t perfect though. I ran into some frame drops both docked and handheld in some levels. These aren’t gamebreaking but the slowdown was noticeable. Hopefully patches can address these.

Right from the initial trailer, Mad Rat Dead’s soundtrack has always shown promise. The full game has a fantastic selection of catchy and upbeat music. Music is very important in games but it is the most important part of a rhythm game. I’m glad NIS could get a lot of different composers to score this game because Mad Rat Dead has one of the best soundtracks of the year.

Barring the performance issues, the lack of an accessibility option barring the rewind feature is definitely the biggest downside in Mad Rat Dead. I got used to the controls from the demo and had a few problems in some of the boss battles but newcomers to rhythm games will definitely struggle here. There isn’t any mode like the Fixed Beat mode in Cadence of Hyrule where you can play the game without worrying about the rhythm and timing.

Overall, Mad Rat Dead is well worth getting if you enjoyed Crypt of the Necrodancer or just enjoy unique platformers and music games. While the accessibility option that lets you rewind is a welcome addition, newcomers to the genre will be turned off by the difficulty. Despite that, Mad Rat Dead for Nintendo Switch maybe one of the best rhythm games you can play on the system this year. Rhythm game and platformer veterans will find a lot to love here. I’d recommend checking out the demo to see how you find the difficulty here. It is good to see NIS continue to release unique games like Mad Rat Dead following The Liar Princess and the Blind Prince, Yomawari, and Labyrinth of Refrain.