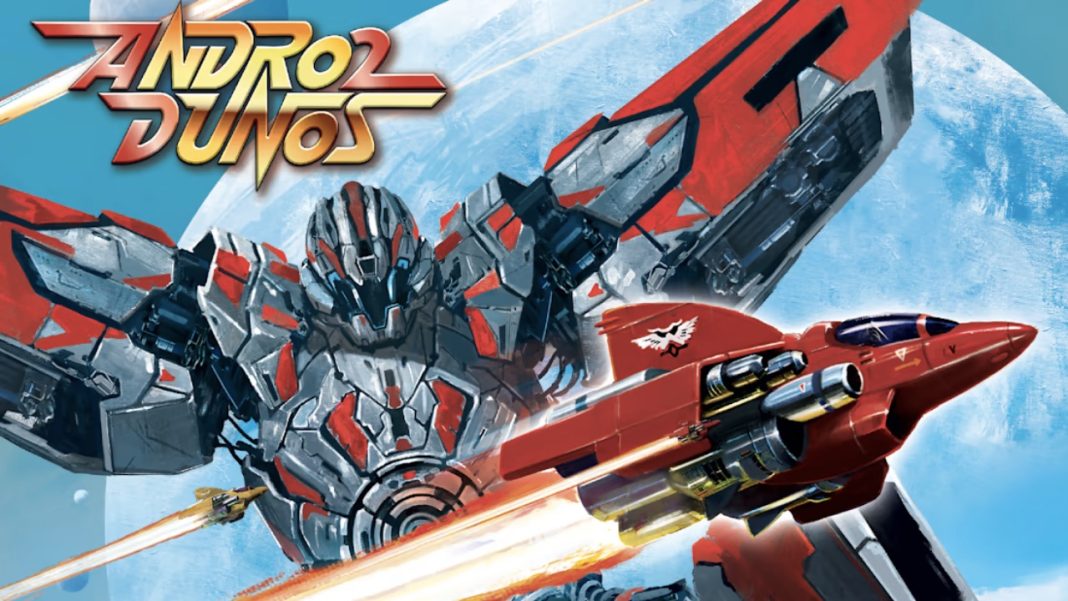 Publisher PixelHeart and developer Picorinne Soft recently released Andro Dunos 2 on Nintendo Switch, PS4, and PC platforms with Xbox One, Dreamcast, and Nintendo 3DS versions also releasing across the globe. Andro Dunos 2 is a sequel to the 1992-released Visco shoot’ em up. Andro Dunos is one of the shoot ’em ups I had not heard of until I read about it getting a Nintendo 3DS physical release in 2022. Andro Dunos 2 aims to feel like a 90s shoot ’em up on current platforms. I’ve been playing for over a week now and Andro Dunos 2 has impressed me quite a bit, but it has some aspects that need work.

Andro Dunos 2 is a side-scrolling shoot ’em up where you control a ship that has four different weapon sets that you can switch between during the seven main stages of the game. Each stage is full of great art and music, but more importantly varied enemies and excellent bosses. Andro Dunos 2 feels a bit bare-bones because you can start the game to go into arcade mode or use the stage select to jump into any stage you’ve unlocked or the bonus content like boss rush mode. The stage select lets you either just play that stage as a single stage run, or play the arcade mode from that stage so you can get further into it if you were having trouble before.

When it comes to controls, Andro Dunos 2 is very simple. You can move using the directional pad or the left analog stick, and you use the A and B face buttons to either shoot or use the hyper shot skill that needs to recharge once used. You use the L and R buttons to swap between the weapon sets. As you plow through the unique enemies across the stage, you also grab power ups and various collectibles to raise your score and level up before the next stage. When you level up, you can allocate your point(s) into your weapons and ship.

Barring the arcade mode and stage select option in Andro Dunos 2, you can change the difficulty from arcade (default) to the easier journey or the harder android options. You can also adjust the credits you have up to 9. There are no other options for the gameplay aside from control options that you can change. This is one of the disappointing aspects of the release in its current state. You cannot actually change any screen or display options here. This includes the border wallpapers around the gameplay that are chosen seemingly at random when you launch the game. I also would’ve loved some aspect ratio or filter options as is the norm with shoot ’em ups on Nintendo Switch.

Visually, Andro Dunos 2 only has one flaw on Nintendo Switch. There are some stages where it is hard to tell the foreground from the background in parts. Barring this, I didn’t have any major issues with it, but hope some of the minor scaling issues that are noticeable. On the audio side of things, Andro Dunos 2 has a catchy soundtrack that I never got tired of in my time spent playing it on Switch and PC. The sound effects also fit the game perfectly. I hope the soundtrack gets a physical release in the future.

Hopefully a future patch can not only add some screen options, but also allow viewing the tutorial separately and add an in-game manual for the various shot and weapon types with some information on progression for players. Only having local leaderboards is also disappointing. I imagine implementing cross platform leaderboards would not be feasible, but at least having them for feasible platforms would be good to add replay value to those who don’t want to just compete with themselves.

In its current state, Andro Dunos 2 is a ton of fun with its lovely aesthetic and great core gameplay. I can recommend Andro Dunos 2 to those looking for polished core gameplay in a side-scrolling shoot ’em up, but with the caveats about the lack of display options and online leaderboards. Hopefully those can be addressed in potential updates. I’ve already enjoyed playing it on PC after Nintendo Switch, and will definitely be grabbing the Nintendo 3DS physical for my collection when it releases.