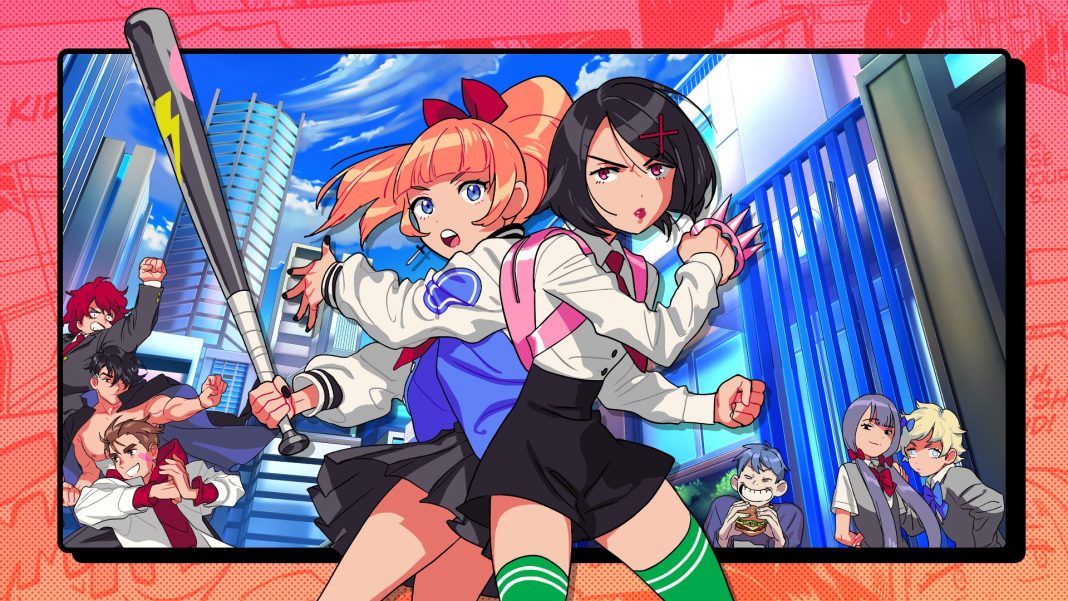 Ever since River City Girls was rated for release, I was curious about what WayForward would do with Arc System Works’ River City franchise. WayForward has released loads of super polished experiences in the past like Shantae Half Genie Hero and more recently worked on Bloodstained: Ritual of the Night alongside others. WayForward is known for superbly animated characters and great visuals in addition to smooth gameplay. River City Girls has looked fantastic in every showing and having finally spent time with it over the last few weeks, it manages to get a lot right with some annoyances holding it back.

River City Girls is an open-world side-scrolling beat ’em up that is a part of the long running River City or Kunio-kun franchise. While Arc System Works owns the River City brand now, River City Girls has been developed by WayForward and it has crafted one of the best looking and sounding beat ’em ups ever. You start by selecting either Kyoko or Misako and beginning the tale to rescue your boyfriends who have been kidnapped. Gameplay involves exploring different areas that are gorgeously detailed to fight various kinds of enemies ranging from cheerleaders to massively powerful bosses and levelling up to earn new skills as you keep playing. There are loads of side-quests and unique shops scattered across the world with a generous serving of references and characters from the River City franchise.

Combat is straightforward but satisfying when you pull of multiple attacks and nearly take out enemies near you in a single combo. It isn’t perfect though with enemies taking far too long to get up sometimes ruining your rhythm. This gets very annoying because initially it feels like the enemies are dead and you can move on to another target but said enemy gets up and starts attacking you. The other problem is that the attack button is the same as the button you need to press to move to another area near a door or entrance. This results in moving by mistake which costs you time because enemies will respawn when you move between areas. The one great thing about combat is how stylish the animations are and the fact that you can revive your co-op buddy by executing a stomp attack which looks hilarious in motion.

Aesthetically, River City Girls is beyond amazing. Everything from the character designs of the main characters to gorgeously detailed shopkeeper portraits and even the in-game interface for the girls’ smartphones looks gorgeous. WayForward rarely misses the mark for visuals and animations and I think this is its best work yet in that aspect. Playing on an Xbox One X, I ran into no performance issues with the game at all. The manga-like cutscenes are probably the highlight here when it comes to visuals.

Megan McDuffee’s score is just as excellent as the visuals for River City Girls. There are vocal tracks like the opening and ending themes. Chipzel (Super Hexagon) also contributed on many of the chiptune songs. The game features voice acting which surprised me with how well it is done. The whole look and sound of the game in general feels super polished compared to most games at this price point.

Sadly, River City Girls suffers quite heavily thanks to a few things. The lack of online is really bad when you take into account that the game hasn’t been balanced for solo play. It should’ve allowed you to use an AI-controlled partner or just be balanced for solo play for those who don’t have people to play locally with. The story and delivery has been very good but the ending feels very abrupt and doesn’t really feel like a good payoff for everything the game was building up to from the start. Some of the smaller issues like the button options to attack and move to another area can be addressed but I really hope WayForward can fix the balance.

River City Girls had the potential to be absolutely amazing but the lack of balance for solo players, no online, and the button choice issues hold it back from being an essential right now. If you have someone locally to play with, this is well worth looking into because it is one of the most stylish beat ’em up games ever. The lack of online is a huge deal breaker because WayForward nailed basically everything else and I hope they either look into patching River City Girls or doing a sequel that builds on this amazing base.