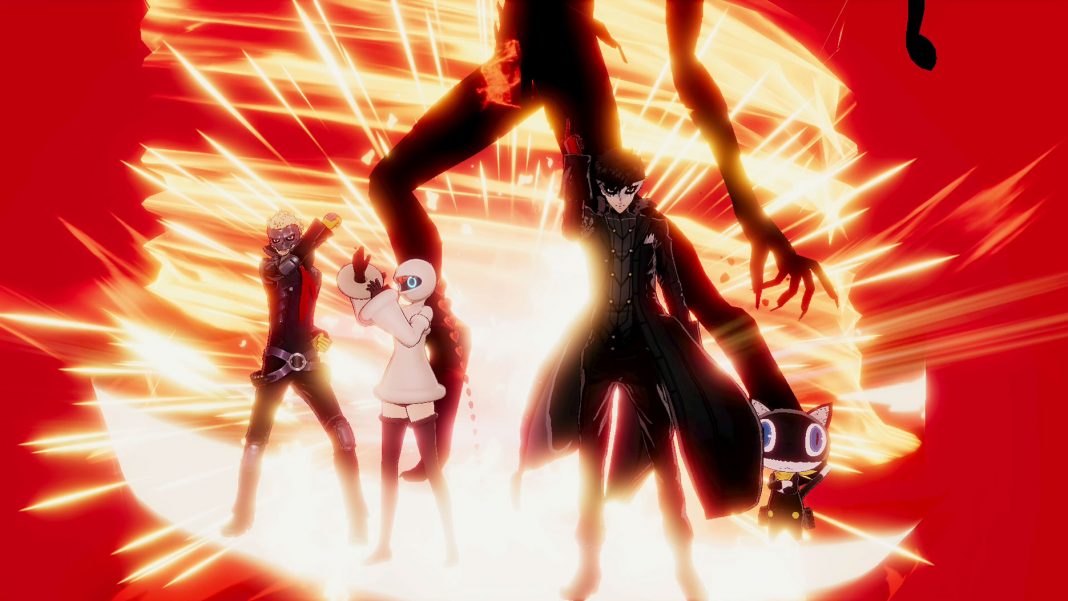 Persona 5 Strikers from Atlus, Koei Tecmo, and Omega Force finally releases in the West beginning February 19 digitally and February 23 physically on PS4, Nintendo Switch, and PC via Steam. Read my review of it here. While it does have elements of Omega Force’s musou/warriors games, it is very much a Persona RPG that looks, feels, and sounds like a true Persona game with changes to combat. If you’ve never played a Persona RPG or a musou/warriors game, these tips and tricks will help you get the most out of your time spent in Persona 5 Strikers across combat, exploration, story, crafting, easy money, and more. Here’s what you need to know.

How to save in Persona 5 Strikers

How to progress the story in Persona 5 Strikers

If you’re ever confused on what to do next in Persona 5 Strikers, you can always look at the top right of the screen for your current objective and sometimes also a hint to complete the objective.

Managing your HP and MP is very important in Persona 5 Strikers. Persona 5 Strikers features musou-like combat instances where you fight groups of shadows that consist of less powerful grunts and sometimes more powerful shadows that are like minibosses alongside grunt shadows. Persona 5 Strikers gives you a lot of freedom with movement and also a lot of environmental prompts to use various things like poles, skateboards, and more to your advantage in combat. Don’t be afraid to experiment in early encounters or even turn the difficulty down if you’d rather focus on the story. Try to ambush enemies by approaching them without them detecting you and then pressing the appropriate button prompt to give you a major advantage at the start of the encounter.

How to level up quickly in Persona 5 Strikers

The easiest way to level up fast in Persona 5 Strikers is to battle as many enemies as possible and slowly add BOND skills that give you free HP and SP recovery. This lets you fight even more enemies. You can keep leaving and entering Jails to fight the same enemies as well.

While exploring Jails, pay attention to the trade-in items you can pick up while exploring. These literally exist so you can sell them for money. This is one of the easiest natural ways to earn money quickly. You can also hunt treasure demons just like in Persona 5 but they run away quickly so try and kill them very quickly. You can also save money by unlocking the BOND skill for discounts in Sophia’s Shop.

How to change party members in Persona 5 Strikers

You can change party members in Persona 5 Strikers by opening the Stats part of the main menu outside combat. In a Jail, you can use the Change Party menu before you begin the infiltration to select your party members.

How to find enemy weakness in Persona 5 Strikers

Holding L2 (PS4/PS5) or ZL (Nintendo Switch) will let you analyze enemies with Third Eye. This will let you determine enemy strength as well with red, yellow, and blue, corresponding to strong, standard, and weak enemies.

How to heal in Persona 5 Strikers

You can heal in Persona 5 Strikers by using the auto-recover option by pressing down on the d-pad. This uses up healing skills so SP does get consumed but it is a shortcut to use the healing skills manually. You can also heal with items by pressing + (Nintendo Switch) or options (PS4/PS5) to use an item and heal in and out of battle.

When the showtime gauge is full, you can press X+A (Nintendo Switch) or Triangle and Circle (PS4/PS5) to perform a very powerful attack skill that will turn the tide of a harder battle.

How to phantom dash in Persona 5 Strikers

When you approach a point of interest or use Third Eye to find a point of interest, you can press the on-screen prompt (A on Nintendo Switch) to perform a phantom dash that lets you move quickly and go into hiding instantly. You can follow this up with special actions like spinning on a pole to attack enemies and more.

How to use persona skills in Persona 5 Strikers

Persona skills in Persona 5 Strikers can be used by holding R or R1, aiming at enemies with the left analog stick and then selecting from the menu on the right. Skills can cost SP or HP. Persona skills that use HP will have your HP gradually restore over time as long as you do not take damage.

How to change Personas in Persona 5 Strikers

You can change Personas in Persona 5 Strikers during combat by pressing left or right on d-pad while holding R/R1. Joker can carry multiple Personas as expected. When you switch a Persona, the skills you have access to and your stats and affinities also change to those of the Persona equipped.

How to unlock new Personas in Persona 5 Strikers

You can obtain new Personas by defeating shadows in battles and a mask being rewarded as a drop after said shadows are defeated or through Persona fusion. Some of the harder shadows will always drop a mask for you to pick up so that Joker can use said Persona.

How to use guns in Persona 5 Strikers

You can use your gun by holding L/L1 and pressing R/R1. Remember that ammo is not unlimited during a battle but it does replenish after the battle ends. Each character has different gun attacks and abilities so remember to try them out when you switch characters.

How to ambush shadows in Persona 5 Strikers

You can ambush shadows in Persona 5 Strikers by pressing the ambush button (X on Nintendo Switch, triangle on PS4/PS5) behind a shadow to perform a pre-emptive strike. You can also press the same button while in hiding after performing a Phantom Dash.

Persona 5 Strikers features some doors or gates that require Oracle’s (Futaba) hacking ability. During this, you will need to protect her from waves of enemies until the process is complete. Ensuring enemies don’t go near and attack Oracle will make the battle get over faster.

Bosses are usually battles of attrition initially as the boss shadows and bosses have a ton of HP compared to regular enemies. Learning the boss’ weakness and performing skills to target that will help you perform additional (1-more) attacks that let you attack again and eventually do stronger all-out-attacks by pressing the correct prompt to do massive damage.

New to Persona 5 Strikers is the ability to have Joker cook up items or food that restore HP, SP, grant buffs, and more. You can cook using ingredients found while exploring in recipes. You can unlock more recipes from regional shops and from special events. As expected, you’re better off focusing on SP recovery dishes since SP management is tricky early on. Make sure to check stores in each new location so you can buy ingredients when needed.

After a few hours you gain access to Sophia’s shop in Persona 5 Strikers. Sophia sells weapons, items, accessories, and protectors (armor). Make sure you buy better weapons and protectors for your main party members first and then for everyone else whenever you can before entering a Jail infiltration. You can also get discounts by unlocking a specific BOND skill.

Make sure to stock up on weapons and protectors from Sophia’s Shop for your main party members early on in Persona 5 Strikers. These drastically improve combat encounters because you get massive defense and attack boosts with the newer gear available for sale.

How to earn BOND points in Persona 5 Strikers

The BOND feature lets you unlock additional passive skills, abilities, and much more as you deepen your bond with the other phantom thieves. This unlocks more BOND skills that you can buy with BOND points from the main menu in-game. You can unlock more BOND points by increasing the BOND level through socialising, events in the real world, battles in the metaverse (Jails), and more.

What BOND skills to unlock first in Persona 5 Strikers

You are free to unlock BOND skills in whatever order but I’d recommend unlocking the skills to earn more BOND points, then Sophia’s shop discounts, and then focussing on the Oracle Healing or Ambush healing skills. A lot of these won’t give you immediate payoffs but will definitely help out in the long run.

Analysing enemy weaknesses, focussing on those weaknesses, using the environment to your advantage, and taking care of your HP and MP are key to surviving harder battles. Avoid enemies that are called Dire Shadows as they hit harder than bosses. You can come back to take them on when you are more powerful later on usually.

Using Third Eye is key to making the most out of the metaverse and in Jails. Persona 5 Strikers is full of secrets, hidden items, chests, and more off the beaten path so don’t hesitate to explore once you have cleared out shadows in a location. Whenever you see a checkpoint, register it, and consider taking a break in the real world to get a free heal and to restore the security level in a Jail back to 0%. Persona 5 Strikers has great dungeons with excellent music and designs so enjoy the ride.

How to reduce security level in Persona 5 Strikers

If you are detected by a shadow, the security level is raised. Some Jails have security lights and other puzzles with you needing to avoid being detected as well so be mindful of these. You can lower the level by winning battles. Press ZL or L2 to check the level. If the security level hits 100%, you will be forced to leave the Jail.

Best way to restore HP and SP in Persona 5 Strikers

The best way to fully restore HP and SP in Persona 5 Strikers early on is leaving and re-entering Jail at the checkpoints. This restores your HP and SP for free and there’s absolutely no penalty for doing so barring the long loading screens on Nintendo Switch that sometimes get annoying when you want a quick heal for free.

How to unlock checkpoints in Persona 5 Strikers Jails

Checkpoints in Jails look like slightly invisible  blue pillars rotating. Make sure to access a checkpoint by interacting with it when you see one. This registers and unlocks the checkpoint for fast travel and also lets you resume infiltration from this point.

How to fast travel in Persona 5 Strikers

You can quick travel or fast travel in Persona 5 Strikers by pressing the touchpad or – on Nintendo Switch and select a destination. You unlock this very early on in the game.

Stock up on SP items in Persona 5 Strikers