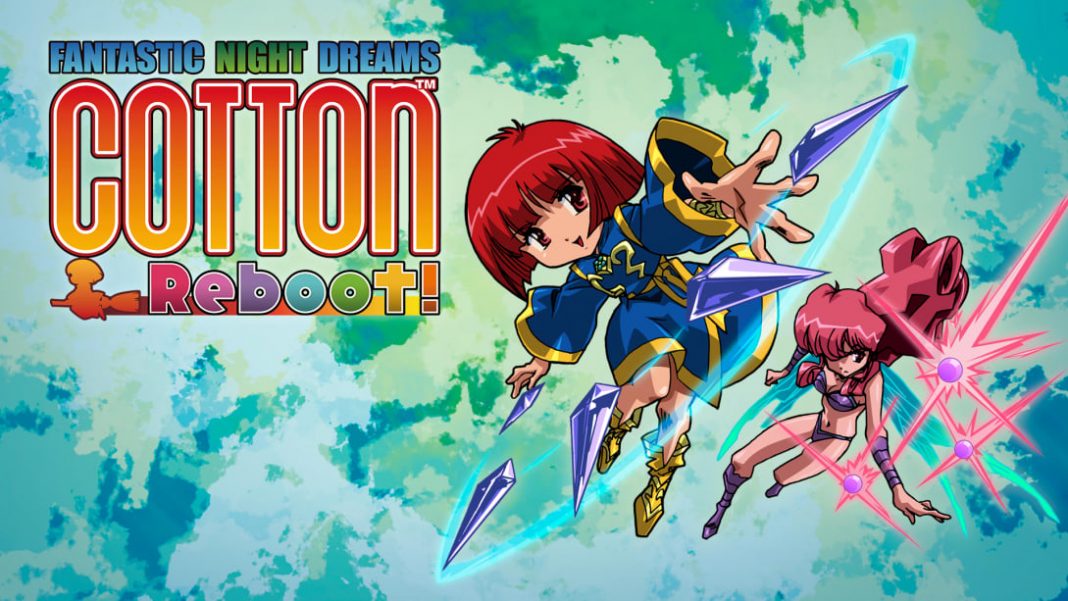 One of the best things about the Nintendo Switch is in how it introduces many older games to a new generation of players. Ever since Nintendo’s hybrid system released in 2017, it has gotten tons of retro collections, reboots, and spiritual successors to older games. These have been great at letting those who missed these games initially get a chance to play them on modern hardware. Cotton Reboot from Success and ININ Games does just that for Cotton. I had never played Cotton before Cotton Reboot and it has been a great way to appreciate the cute ’em up style of shoot ’em up games even more.

A cute ’em up is a more colourful and fantastic take on the shoot ’em up genre when it comes to visuals and Cotton is one of the key games in the genre alongside Fantasy Zone that everyone has experienced in some form through retro collections or re-releases. Cotton Reboot is actually a set of two releases together in a single package bringing a full remaster remake hybrid of Cotton: Fantastic Night Dreams, the X68000 version of it, and a new score attack mode. The modes all have a few common themes but bring their own unique mechanics for gameplay and scoring.

The world has been conquered by demons and filled with darkness and Cotton is asked to help. Cotton, the young witch, who will do anything to get special candy called Willow, isn’t interested in this until she is told that defeating demons will let her get some Willow. The short cut-scenes in Cotton are excellent with a great aesthetic across both the original and arrange modes.

Cotton’s core gameplay is a blend of side-scrolling shooting, varied levels, a ton of unique enemies, loads of crystals, and more. The levels all have you building up experience, collecting more power ups or magic, charging up your bombs, collecting and working with crystals, and taking on a boss. The crystals play a huge part in Cotton Reboot. These dropped crystals not only serve as a way to diffuse your bullets, but also in what powerups you collect. Depending on how much you shoot a crystal, its color changes and you can collect a different powerup for your magic. Shooting a crystal too much will have it turn black after which it will not pass any bullets through it.

What makes the gameplay in Cotton Reboot (all the modes) worth coming back to, is a combination of the responsive controls, excellent aesthetic, brilliant soundtrack, and gameplay mechanics. Cotton has you strategize on the go with what crystal to aim for, when to pick up a specific crystal while avoiding enemies, firing, paying attention to your experience and gauges, and aiming for a high score.

Arrange Mode in Cotton Reboot is the main draw of this release with its own mechanics and changes to the original with the new 16:9 HD visuals, arranged soundtrack, and more. The X68000 Mode lets you play a port of the original from 1993 while the Time Attack mode lets you take on enemies in a colosseum-like stage in two or five minute sessions. While I adore the look of the X68000 original, the Arrange Mode is where I spent the most time. It is just that good.

Visually, Cotton Reboot is mostly brilliant but there are some issues. The Arrange Mode gets a bit too busy for its own good when you see multiple score multipliers fly all over the screen making it hard to tell what is an enemy bullet or an enemy sometimes. The X68000 Mode also lacks any visual options like aspect ratio changing, filters, or borders. For a collection or a premium release like Cotton Reboot, you’d think basic visual options for an older game would be basic functionality. The game can get so busy visually that when you move your character up and down, the game hides the gauges and interface until you move back out of the way.

I’m very impressed with the audio in Cotton Reboot. Both the old and new soundtracks are excellent and the voice acting across the board is well done. The developers even added some voice acting to the in-game manual that you can access from the main menu. This teaches you the basics of the game and explains the in-game systems.

Barring the lack of visual options, my biggest complaint with Cotton Reboot is in the lack of a proper training mode. Given how much care and effort went into bringing Cotton to a new generation of players, it is disappointing that there isn’t any stage select and a training mode to experiment before trying to move up the ranks on the leaderboards. Omissions like this make this release feel like a missed opportunity in some ways. It also doesn’t help that there is no quick restart option with the slightly long load times in Cotton Reboot on Nintendo Switch. I also noticed some text issues in the localization.

Cotton Reboot does a fantastic job of bringing Cotton and cute ’em ups to a new generation of players. The core gameplay is superb and has been a joy to experience both docked and handheld on Nintendo Switch. The developers have done a great job with this conversion and the port of the X68000 original on Nintendo Switch. Hopefully the next Cotton release or potential future releases of Cotton Reboot add visual options and a training mode.