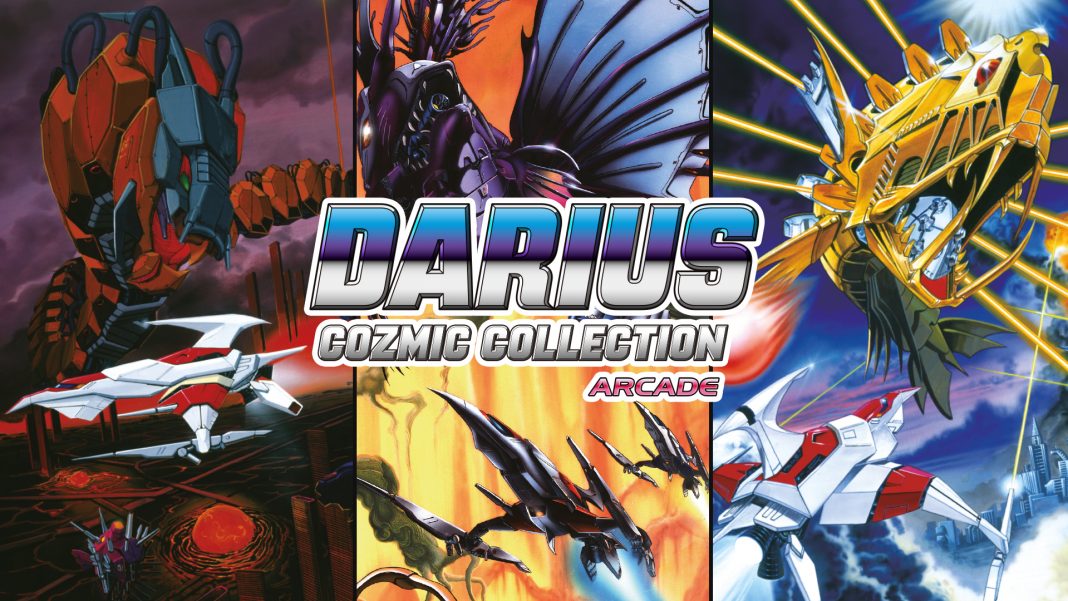 As the name suggests, Darius Cozmic Collection Arcade is a collection of Darius games that were originally released in arcades. This collection has three main Darius games with a few variants of the first two games. The asking price for this collection is definitely on the higher side compared to other retro collections or releases but this collection pulls well above its weight for a few reasons.

Taito’s first Darius game gets its original version from 1987, a new version with rebalanced boss fights and some weapon changes, and an extra version which has even more balance changes. Darius Extra Version of the three has been balanced to be easier initially as well. As a triple screen release, Darius is definitely worth playing but it doesn’t scale too well in handheld especially on the Nintendo Switch Lite.

Darius II (two screen version) is the base of the second main game included in the collection. It was initially released in 1989. Darius II allowed orientation changing as a new addition with a lot of weapon improvements to the ship you control. Sagaia is a Western version of Darius II with stages shortened and an increased difficulty. Another version of Sagaia is also included in the collection.

The final main game included is Darius Gaiden. Darius Gaiden is the third main entry in the Darius series from 1994 and it is excellent across the board. This game itself makes the collection worth owning for me with its fantastic levels, brilliant soundtrack, and the ability to recuit mid-boss characters. The visuals are also a huge upgrade and this is one of the most polished horizontal shoot ’em ups I have played.

In terms of actual emulation for the collection, M2 (Collection of Mana) is the developer here. M2 is one of the best in the business when it comes to emulation with arcade-perfect emulation and screen options. This collection lets you play with fullscreen, fit to screen, and pixel perfect options for display types. There are smoothening, scanlines, and background options as well. There are also various gadget options to adjust the interface and fully remappable controls. A lot of care clearly went into making these games more accessible.

The biggest downside to this release is that the multi-screen games do not scale well (as expected) when played handheld. I got used to them but it really isn’t fun playing games designed for multiple arcade screens on a small handheld. The other issue holding this back from being a perfect collection is the lack of any sort of museum or gallery for the vast history of the games and this series. Some interviews with the developers would’ve gone a long way in making this worth it for more than just people looking for an easy way to experience these arcade classics.

Overall, Darius Cozmic Collection Arcade is an easy recommendation for Darius fans despite its high asking price. Darius Gaiden in particular is well worth more than half of this asking price and having arcade-perfect releases of multiple versions of the first two Darius games from M2 is well worth it.