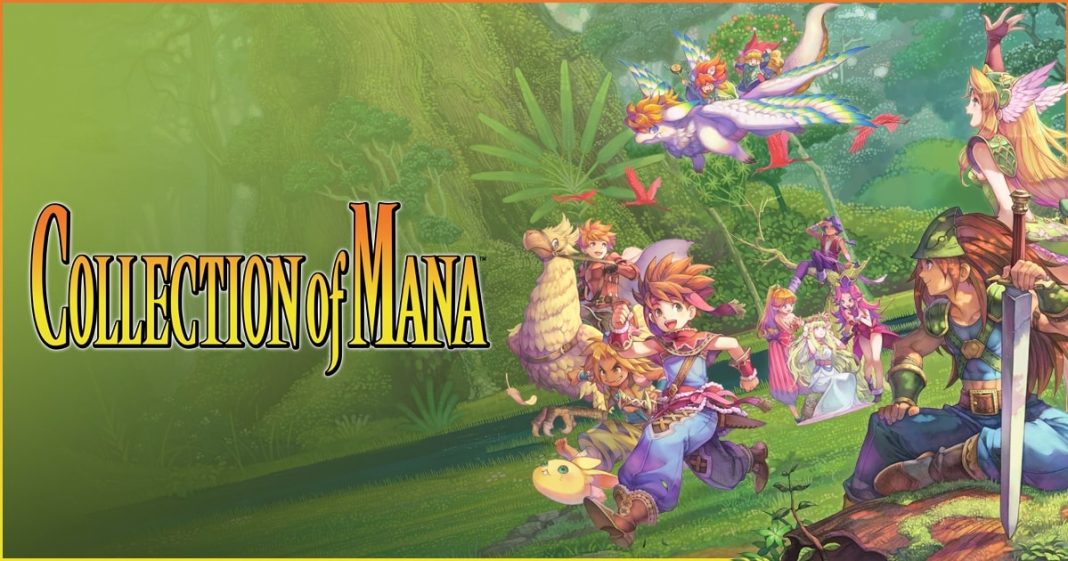 Square Enix’s Mana franchise has had quite the history ever since its debut entry on the Game Boy in 1991. It feels like every attempt at getting the franchise back into the mainstream ends in uncertainty for a variety of reasons. The most recent attempt has been through a remake of Secret of Mana that I enjoyed a lot but most people disliked. This released on PS4, PS Vita, and PC. Nintendo also gave modern audiences in the West a taste of Mana with the SNES Classic Mini that had Secret of Mana’s original SNES release.

One recent release in Japan seemed like a pipe dream for English speaking fans. That was the Seiken Densetsu Collection in Japan that arrived on Nintendo Switch back in 2017. This collection includes the first three Seiken Densetsu games in their original incarnations emulated by the fantastic M2 —the studio responsible for SEGA AGES on Nintendo Switch and more. They are consistently the best at any sort of emulation on current systems for older games.

The games in this collection have had their own history inside and outside Japan. The first one is Final Fantasy Adventure which was known as Mystic Quest in Europe. Secret of Mana is the most famous of the lot and the third game here is what is likely the main draw for most people. Seiken Densetsu 3 was never officially released in English until Collection of Mana saw a release on the eShop this month. It is officially called Trials of Mana in English and it is getting a remake next year for PS4, Nintendo Switch, and PC.

Collection of Mana has 3 games in their original incarnations emulated perfectly with visual options and 2 of the 3 games already have remakes available. Adventures of Mana that released on iOS, Android, and PS Vita is a 3D remake of Final Fantasy Adventure. Secret of Mana (2018) is a remake of the original SNES game Secret of Mana. Trials of Mana (2020) is a remake of Trials of Mana. I really wish Square Enix would just append Remake to these names to avoid confusion for newcomers.

Final Fantasy Adventure in this collection is the first time I’m playing the original Game Boy version after having played the remake (Adventures of Mana) on iOS and PS Vita. Final Fantasy Adventure is an interesting look at what action RPGs used to be like. It is playable in monochrome with a few filter options and a very colourful background and this would have benefited the most from having the option of no artwork outside the actual gameplay.  You play as someone who just escapes from being used as entertainment through fighting and soon discover a plot that is threatening the world. Combat is simple and this features a timed attack system that sees your weapon charge up for more attack. Final Fantasy Adventure also has some interesting puzzles.

Secret of Mana is the highlight for me in this collection because what I played of it on the SNES Classic Mini was amazing. I love the pixel art and the music keeps getting better. Secret of Mana has aged brilliantly and with the Switch version, you know have a super easy and convenient way of playing in co-op which is something this game always supported. The core Mana Tree plays a focus in this franchise. The power up bar mechanic here feels a lot better than Final Fantasy Adventure but the ring menu mechanic is the real star alongside the multiplayer. It has some awkwardness in animations but overall Secret of Mana is a must play game even today and this is the best way to experience it.

Trials of Mana being included here is still shocking. Given the silence for a localisation for 2 years nearly, you’d think the ship had sailed on this title seeing an English release. Given that Square Enix is doing a remake next year, I didn’t think they would even bother localising this. Thankfully, we now have an official localisation and release of one of the most surprising and excellent RPGs out there. Seiken Densetsu 3 is something people kept telling me to play and I can finally see why.

Trials of Mana is very open and gives you a lot of options right from the get go where you select your protagonist and companions from the beginning. Trials of Mana maybe one of the best looking SNES era games ever and it has loads of replayability. This release itself is worth the asking price since it probably took a ton of effort to add not one but multiple localisation options for a game that had been untranslated for nearly 25 years and one fans had been asking for ever since.

Oddly enough, the save data is tied to game language. Secret of Mana lets you play in English (US), English (UK), French, or German. You can’t switch between them and continue your save. Thankfully, M2 implemented quick save and quick load options. You can access this from the options menu super quickly.

On the surface this may feel like three retro ROMs in a package for $39.99 but there are a few things that definitely make it worth the asking price. M2 emulation is basically the best you can ask for and there are no emulation issues here. The problem is in the implementation of the visual options and the lack of any extras barring a sound test mode.

In most collections today, you have a separate menu for visual options where you can select artwork around the screen, filters, and screen size. This collection just has you toggling between the available combinations using the trigger. Another annoyance is with how you can’t turn off the artwork on each side. While a music player through sound test is appreciated given the excellent music included in this collection, the lack of in game manuals is disappointing. Instead, you have a QR code or website link to follow for the actual manuals.

Overall, Collection of Mana is both fantastic and a bit barebones. It is barebones because in the 2 years since this released in Japan, various retro game collections and releases have taken place with a plethora of features that ensure for a better experience. Collections like the Mega Man ones and even Castlevania are way ahead of Collection of Mana in terms of bonuses and features. Having an official localisation of Seiken Densetsu 3 AKA Trials of Mana and a perfectly emulated Secret of Mana make this collection well worth the asking price for some of the best action RPGs of that era.