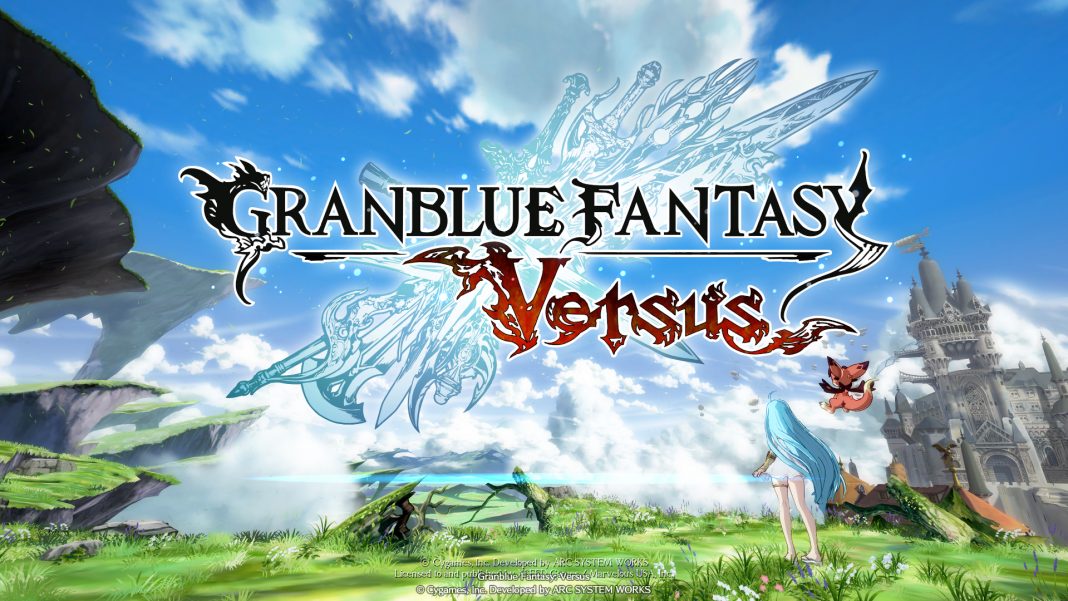 In terms of modes, Granblue Fantasy: Versus has a story mode calles RPG Mode, a versus mode, an arcade mode, tutorial modes, and an online mode. Barring the modes involving fighting, there is also a gallery that has various illustrations and music for you to unlock including drawings of Granblue Fantasy characters by guest artists.

Instead of being just another anime fighter with auto combos or the like, Granblue Fantasy: Versus has a very interesting battle and combat system. It is more grounded compared to the likes of Dragon Ball FighterZ or a modern BlazBlue game. It feels more akin to Street Fighter with some interesting changes. I think a lot of anime fighting game fans are going to be surprised at how different Granblue Fantasy: Versus feels compared to the usual fare.

Since this is a game meant for even non-fighting game fans, Granblue Fantasy: Versus has simple skills and combos. The skills depend on the character and they are all very different with their own cooldowns. You can however opt to use a more technical input method for the skills. This will reduce the cooldown. Each character also has their own skybound art which is the equivalent of a super in this game. When your SBA gauge below the health bar is full, you can easily unleash a skybound art.

If your health is lower than 30% and your gauge is full, you unleash a super skybound art. This is a cinematic move that is just another way for Arc System Works’ visual team to flex. The super skybound arts range from massive damage attacks to your opponent being transported to a wrestling ring and pinned and even one that has you being able to use a summon with powerful skills for a limited time.

Arc System Works has been getting better with every new game when it comes to tutorials. Granblue Fantasy: Versus has a free training mode that lets you experiment with characters on your own and a mission mode that will teach you everything from basic movement to super skybound arts and combos. The tutorials are great but one surprising addition is the glossary mode. While most games would just use this to detail terms used in the story, the glossary here even has an explanation of basic fighting game terms. I hope more games do this because developers fail to realise that many non-fighting game fans usually get into the genre through a game based on a brand they like. A good tutorial and a glossary like this will go a long way in making more people try out fighting games.

The base roster in Granblue Fantasy: Versus is just 11 characters with one you can unlock once you finish RPG Mode. Gran and Katalina are very good introduction characters that are well-rounded and easy to learn. Metera and Zeta on the other hand are a lot of fun to learn but play very differently. My favourite characters so far are Ferry and Ladiva. The entire base roster barring Gran and Katalina are very unique when it comes to playstyles and I’m glad to not deal with multiple characters that feel similar. The base roster is definitely smaller than usual but the playstyles being so different makes up for that.

While most fighting games these days either have just visual novel segments separated by random fights for their story modes, Granblue Fantasy: Versus takes things to the next level. The story mode here is called RPG Mode and it has you playing through a campaign solo or in co-op that plays out like a side-scrolling action RPG brawler. This is an original story featuring characters from Granblue Fantasy that has you starting out as Gran who ends up fighting with former allies to find out why chaos has taken over the realm. Combat in RPG Mode has you taking on enemies from both sides of the screen like a side-scrolling brawler but using action RPG skills with cooldowns. You can even equip some additional skills and buffs to help your partner.

While this features some visual novel segments, there are some gorgeous 3D cutscenes as well. You can join others or call for help during battles as well. The highlights of RPG Mode are the boss battles and the great implementation of the mobile Granblue Fantasy systems with weapons and upgrades. If you aren’t familiar or don’t care about the deep weapon upgrade systems, you can even use an auto-assign option to just focus on the story and not worry about weapons.

Online in Granblue Fantasy: Versus is very interesting. To be able to play against friends or randoms, you need to finish a few initial ranking matches against the CPU before you get queued against random people. Once you finish your initial training matches, you are assigned a rank and can then play against friends or create and join rooms. Rooms use a similar setup as other Arc System Works games where you have a chibi avatar and can sit on arcade machines to play against others in the room.

When it comes to netcode, Granblue Fantasy: Versus uses what seems like Arc System Works’ typical delay based netcode. This isn’t ideal and it would’ve been great if they could use a rollback netcode setup like Marvel Vs. Capcom Infinite. From what I played over the last few weeks, Granblue Fantasy: Versus online is much better than Soulcalibur VI and Super Smash Bros. Ultimate by a large margin but not as good as Street Fighter V or the recently updated Garou: Mark of the Wolves.

For a lot of people, Arc System Works raised the bar for visuals in fighting games with Guilty Gear Xrd Sign. This was then surpassed by Dragon Ball FighterZ. Granblue Fantasy: Versus proves once again that Arc System Works excels at visuals bringing some of the best character designs to life with gorgeous character models and stunning animations. This is easily their best looking fighting game yet and the best looking fighter available today for me and it likely will remain that way until Guilty Gear Strive releases.

One of Granblue Fantasy’s strengths is the soundtrack for both the game and the anime. This has carried over into Granblue Fantasy: Versus with a soundtrack that I have grown to enjoy as much as Guilty Gear Xrd Sign that has my favourite fighting game soundtrack of all time. The character music for Zeta and Lowain are definitely standout tracks here. The RPG mode also has a lot of great music. If you enjoy grand soundtracks in JRPGs, Granblue Fantasy: Versus will easily be in your top soundtracks of the year with its great blend of orchestration and metal. It features the likes of Nobuo Uematsu (Final Fantasy), Yasunori Nishiki (Octopath Traveler), Tsutomu Narita (Granblue Fantasy), Hidenori Maezawa (Castlevania), and more.

While I adore almost everything in Granblue Fantasy: Versus, it has some flaws right now. For some people, the small base game roster will be a problem. I love that almost every character feels completely different to play and actually prefer having this over a game where many different characters feel mostly the same to play. Load times are pretty bad on PS4 Pro. Hopefully this can be addressed in future patches. The final annoyance affects both language options. The lip sync for dialogue feels off regardless of whether you’re playing with English or Japanese voice acting.

Overall, Granblue Fantasy: Versus is a breath of fresh air in the fighting game scene right now. It brings the best of Arc System Works and Granblue Fantasy together in one package that is accessible to newcomers and one that has enough depth for fighting game enthusiasts. Despite the few annoyances, it is a must play fighting game in 2020 that is worth your time. I can’t wait to play the newer characters in the future.