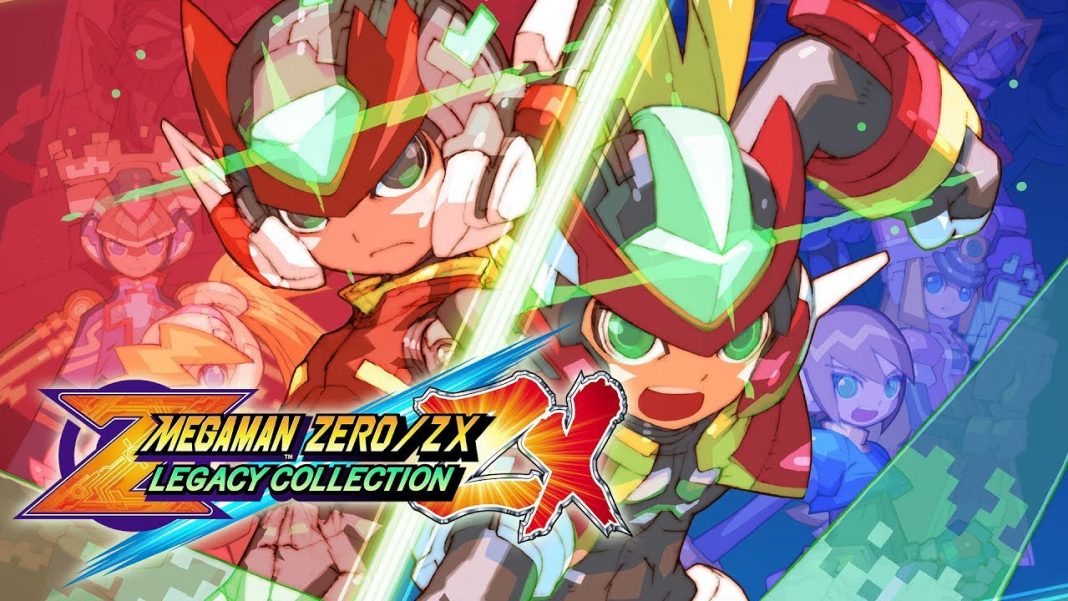 After releasing multiple Mega Man collections that led to a new Mega Man game in the form of Mega Man 11, Capcom is back to bringing more of its classic games to modern systems with the Mega Man Zero/ZX Legacy Collection. This collection features games released on the Game Boy Advance and Nintendo DS systems with a wealth of enhancements and gameplay options in a single package with a plethora of extras. Capcom has slowly become one of the best publishers when it comes to bringing older games to modern systems thanks to collections like this and the Ace Attorney Trilogy.

The Mega Man Zero/ZX Legacy Collection includes Mega Man Zero, Zero 2, Zero 3, and Zero 4 from the Game Boy Advance and Mega Man ZX and ZX Advent from the Nintendo DS. In terms of narrative, Mega Man Zero is set a hundred years after Mega Man X. It is a bit annoying that given there are six games here, Capcom decided to split them up into two menus that have the same gallery and music player options. It feels like the menu was designed for two collections but the release is just a single one.

Over the last few years, it has felt like Capcom is pumping out these legacy collections for Mega Man games and newcomers to the series might feel overwhelmed by the sheer amount of releases available on modern systems. The good thing about newer collections is that Capcom improves the overall package with every new release. The Mega Man Zero/ZX Legacy Collection is easily the most approachable of the Mega Man collections and it has a lot of options to make the experience more fun to newcomers to the series.

The Mega Man Zero and ZX games were developed by Inti Creates who developed Bloodstained: Curse of the Moon and the Azure Striker games recently. Both of these are action platformers with an emphasis on good level design and a great presentation. These are my favourite looking Mega Man games by far and the conversions for Xbox One and Nintendo Switch have been great in the time I’ve played them.

In terms of visual options, you have three filter options, four screen layout options, and multiple wallpaper options. The screen layout options let you maintain the aspect ratio and fill the screen, use the original aspect ratio without filling the screen, use a higher aspect ratio, and stretch to fill the screen. The filter options let you use a smoothing filter that looks pretty bad, no filter at all which is what I played with, and use a filter that emulates a CRT monitor. The wallpaper options include images from all the games in the collection and a plain black none option.

The Mega Man ZX and ZX Advent games were originally on Nintendo DS and the second screen can be displayed in a few ways here. You can have it displayed over the main screen or on the side of it and use the right stick to move the cursor. It is disappointing that the Nintendo Switch release of this collection doesn’t let you use the touchscreen to control the second screen. The original unlockable content you could obtain if you had the Game Boy Advance games (Zero 3 and Zero 4) in the Game Boy Advance cartridge slot while playing Mega Man ZX on DS is also available here through a toggle in the menu.

This collection includes many new features and even a new game mode. A save-assist option and casual scenario mode option are available for each game here. The save-assist mode adds many checkpoints that ensure you won’t be wasting too much time if you die. The casual scenario option adjusts the difficulty and gives you a few more assists. Z Chaser is a new speedrun-like mode. It has three options. Single Chaser lets you race against your own time as you compete in the levels offered across multiple difficulty options. Double Chaser is a local option to play against someone on the same console while racing against time. World Record Chaser has you competing against the best times registered on leaderboards online.

Retro collections that lack a gallery and music player are always disappointing so it is good to see Capcom include loads of concept art and character designs for each game in the collection. There’s even a new set of images that features some new art never seen before and the key art for this release. The music player includes the soundtracks

Since these games were originally handheld ones, they have some visual issues when played on a big screen. Some of the text and UI looks a bit too big on TV. When played in handheld mode on Switch, it is much better. It is very disappointing that the Nintendo Switch version has no touchscreen support at all. This includes the second screen controls for the Nintendo DS games included here.

Overall, Mega Man Zero/ZX Legacy Collection is one of the most approachable and best Mega Man collections available today. While the first game is still a bit too obtuse for its own good, the wealth of accessibility options, music, great gameplay, and artwork, make a collection of great games even better. It is great to see Capcom bring even more classic Mega Man games to modern systems especially with the ZX and ZX Advent games that have never been released outside the original Nintendo DS until this collection. Hopefully the Mega Man Legends games get a collected release from Capcom next.