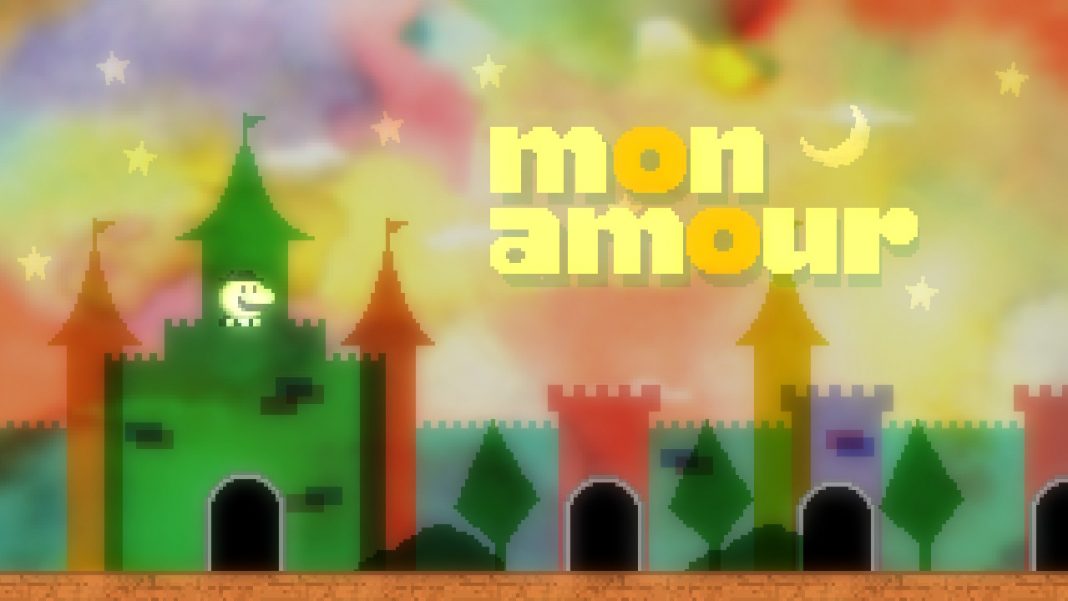 I discovered Onion Games thanks to a friend of mine singing praises of studio director Yoshiro Kimura and the studio for games like Million Onion Hotel and Dandy Dungeon. I was won over in a few minutes of Million Onion Hotel and have since enjoyed playing every release from the studio including the excellent shooter Black Bird. Onion Games releases always end up being worth experiencing because of a combination of many things. The memorable aesthetic and soundtrack play a big part in this, but the addictive gameplay is what elevates these releases to greatness.

When Onion Games announced Mon Amour for Nintendo Switch and PC, I avoided reading up on it to experience the game without any prior knowledge. Having now played it over the last week, I’m very impressed at how the studio has taken a very simple gameplay concept and added its own charm to it across the board.

Mon Amour is a one button Flappy Bird-like game where you need to rescue your princess who has been taken away by witches to a new land alongside all members of the royal court. You can do this by kissing these members across different stages as you avoid obstacles and collect power-ups and hearts.  As you kiss more of these colorful characters, they join you and serve as your lives when you hit obstacles along the way to reach the right side of the screen to kiss someone new and reach the next level. If you fly too far above or below, you get a game over. The more characters you kiss, the easier the game will become with you getting more lives against the various traps and obstacles in levels.

After a fixed set of levels, you reach a castle that basically acts like a rest level. You collect items here to get a big score boost and end up rescuing the various characters you kissed that still remain with you so far. Mon Amour has a citizen list that shows you how many characters you’ve rescued and you can even use this to pick up from stages where you failed to rescue someone. Think of this like a checkpoint system or level select, but you obviously won’t get very far on the leaderboards like this. There is also an in-game notification system for letting you know things other players managed to do.

What elevated Mon Amour above just being Flappy Bird with an Onion Games aesthetic, is in how the scoring system and power-ups work. As you complete levels by kissing, hearts of varying sizes are blown all over depending on what direction you end up kissing the character from. You could collect these hearts now or wait for them to increase in size as more hearts get blown across the levels with more strategic kissing. As the hearts grow in size, you earn more points by collecting them. They also can become large enough where collecting them causes an explosion that moves obstacles away. Barring the hearts, various fruit power-ups also appear giving you different bonuses like clearing obstacles or a shield. It is also worth saving some of these for later levels before you get close to the castle.

Having avoided reading up on Mon Amour before, I was a bit skeptical at whether it would hook me as much as other Onion Games releases after trying it for a few minutes. Thankfully, I was very wrong because I kept finding more things I loved about it as I made my way through the levels. I’m blown away by how well-designed this small game is and can see myself coming back to it for a quick attempt at a new high score often.

Mon Amour feels like it started development as a mobile game given the control system, but it plays very well with button controls. You can also use the Nintendo Switch touchscreen to play it and most of my playtime on Nintendo Switch Lite was with touch controls while I used button controls when docked on Switch. I do hope it eventually comes to iOS because I want this game on everything I own.

There are a few small issues in Mon Amour right now. The load times when you die are longer than expected on Nintendo Switch and you end up dying a lot. Hopefully a potential future update can address these so that you are able to get back into the action quicker. Another nice addition would be a quick restart button when you want to avoid going through the score summary, and start over.

Mon Amour is a simple game on the surface, but it oozes Onion Games charm and is exactly the game I needed right now while I make my way through other very long RPGs. If you don’t enjoy the Flappy Bird gameplay concept, this will not be for you. If you have enjoyed that or like other Onion Games releases like Black Bird or Million Onion Hotel, Mon Amour will be well worth the low asking price. Despite the simple appearance, there’s a lot of depth here if you’re looking to climb the leaderboards.