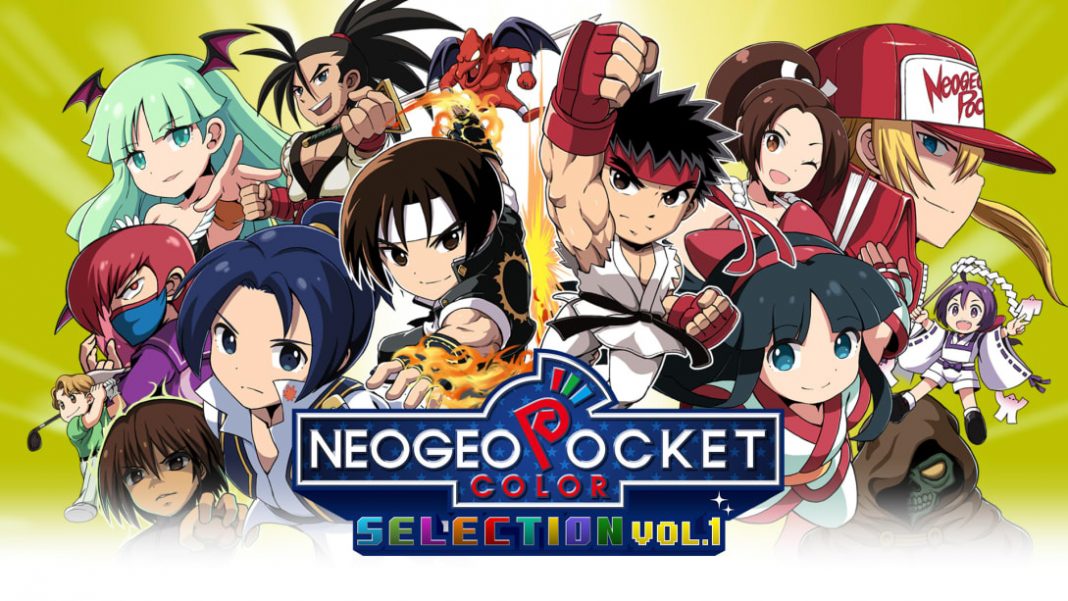 For the new games included here, Big Tournament Golf and the two Metal Slug releases are easily the highlights for me. I didn’t enjoy my time with Dark Arms: Beast Buster 1999, the action RPG, as much as the other games but it has some interesting ideas. The focus on different weapons and evolving weapons is nice and the visuals are probably the highlights of this release for me.

Big Tournament Golf (Neo Turf Masters) is easily my favourite of the non-fighting games here. I originally discovered Neo Turf Masters through DotEmu’s release on iOS and have been buying the arcade release on every platform it is available on over time. On Nintendo Switch in the Neo Geo Pocket Color Selection Volume 1, Big Tournament Golf has multiple game modes with support for two players on the Nintendo Switch in tabletop mode as well which is always good to have. Big Tournament Golf looks and plays brilliantly and is absolutely worth getting standalone if that happens and you aren’t interested in buying the Neo Geo Pocket Color Selection Volume 1.

Having only recently gotten into the Metal Slug games through the Xbox Live releases and ACA Neo Geo classics, I was very curious about the Metal Slug Neo Geo Pocket releases from 1999 and 2000. They aren’t very long but SNK impressed me with the animations and sounds on both these releases. While Metal Slug 1st Mission is a fun run and gun game, Metal Slug 2nd Mission is superb and I can’t wait to replay it. There is some slowdown in some portions but I assume those are to be accurate with emulation for the original hardware.

In addition to just including 10 games, Code Mystics and SNK also added the ability to view high resolution versions of the game box and cartridge for both the English and Japanese versions. You can pan and zoom with button controls and the touchscreen. This is a very nice touch and I wish more retro collections with cartridge-based games did this.

There are three groups of people who this collection will appeal to. The first is complete newcomers who have never played a Neo Geo Pocket game at all but have heard of names of the franchises for some of the games included here. For them, this collection has 10 games they have never played before from franchises with familiar names like Samurai Shodown, Metal Slug, The King of Fighters, and more. The second group is SNK fans who have played a few of these games and are curious about the four new games brought over to Nintendo Switch. The final group is the hardcore fans who have already bought all the six previously released Neo Geo Pocket Color games and are wondering if this collection is worth buying for just four games.

Having not played any of these games before the Nintendo Switch releases and this collection released, I’ve more than enjoyed my time with most of them but can see some people finding a few of the games lacking compared to their arcade versions if available. Those who have owned and enjoyed a few of the releases so far will find a lot to love here with the low asking price compared to buying them standalone. The fans who already own six games need to decide whether the four new games are worth spending the cost of five individual eShop releases in the series now or to wait for a possibility of individual releases later on. Having everything in one place with the cartridges and box art is definitely a nice bonus for the collection.

Visually, Code Mystics has done a great job with bringing the games included in the collection to Nintendo Switch with the filter options, skins, and more. The backgrounds, character art, and animations look gorgeous when played in handheld mode and on TV. As with SNK Vs Capcom: The Match of the Millennium, Neo Geo Pocket Color Selection Volume 1 includes multiple Neo Geo Pocket Color skins, the ability to turn off skins, and toggle filters. You can also adjust the zoom level. The skins look great and in handheld mode when zoomed appropriately and I love that you can even use the virtual buttons to control the games.

In terms of emulation features, the collection includes the ability to rewind quite a few frames behind, view the manual at any time from the menu, and exit and resume right from where you left off. If you do change the device version between Neo Geo Pocket and Neo Geo Pocket Color, the game will be reset though so keep that in mind. Speaking of the device type, I love that Code Mystics left the error screens in when you try to load up a Neo Geo Pocket Color game on the Neo Geo Pocket system. Many of the games included even have nice easter egg messages that change. Make sure you try this out and use the reset function to see the game error screens.

As with in SNK Vs Capcom: The Match of the Millennium, you can use touch controls just about everywhere to use the menus and even use the virtual buttons when you have a skin displayed for a specific game. You can also tap the gameplay portion of the screen to bring up the options menu for rewinding, display options, manual, and more.

My only complaint with the added content in Neo Geo Pocket Color Selection Volume 1 is one that only affects the manuals. While the collection loads up games and lets you switch quickly, going through the manual seems to take longer than it should with it loading for a second or two while turning pages. This is likely because the scans of the manual are very high resolution letting you zoom in and even use the touchscreen when in handheld mode to pan and zoom.

The one aspect holding this collection back when it comes to the actual contents is how the games might not appeal to a lot of people. This isn’t a collection of arcade releases that most people are used to but one of handheld games that many might not have played before just like me. While I enjoyed most of the games included and can see myself playing them regularly, some people might not enjoy the gameplay and the simplicity of some of games included. I’d recommend those unsure about the games included here buy one of the games individually and see how it feels before considering buying the whole set as a paid demo if that makes sense.

Overall, Neo Geo Pocket Color Selection Volume 1 is a great value proposition for those looking to play these games because the individual games available are priced at $7.99 each while the collection with 10 games is priced at $39.99. Those who already bought a few or all of the games will not be too pleased about having to buy a collection for four games but those games would likely be priced at $7.99 on their own so this is like buying five individual games to get all 10. As a retro collection, Neo Geo Pocket Color Selection Volume 1 is easily one of the best of the lot on Nintendo Switch right now.