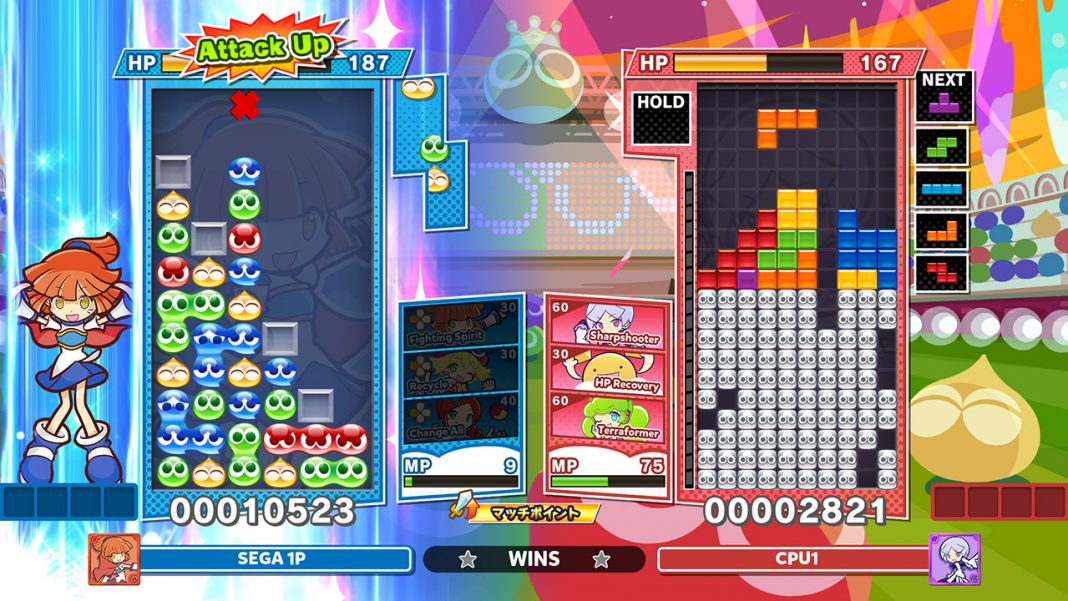 Six years after Puyo Puyo Tetris released in Japan and over three years since it arrived in the West, Puyo Puyo Tetris 2 is finally here on PS4, PS5, Xbox One, Xbox Series X, and Nintendo Switch. If you’re new to Puyo Puyo Tetris, it brings the worlds of Puyo Puyo together with Tetris for a mashup puzzle experience offering the best of both games through a plethora of game modes, a nice story, and online play.

Puyo Puyo Tetris 2 builds on the original with a brand new story, an RPG-like Skill Battle mode, better online, and more. It even fixes some issues from the original’s story mode making things more welcoming to new players. Having played it on Nintendo Switch and Nintendo Switch Lite over the last few weeks, Sega has nailed it with Puyo Puyo Tetris 2 with its additions and improvements.

Puyo Puyo Tetris 2’s core gameplay has two components as the name suggests. The Tetris component has you playing Tetris where Tetriminos (shapes) fall from the top as you try and fill up lines to clear the board. Puyo Puyo on the other hand, involves slime-like blobs called Puyo that fall from the top of the screen. Your aim is to clear them out using chains and combos. While you can play both on their own through Puyo Puyo Tetris 2, the way it blends together both styles in some modes works really well and this release proves to be yet another celebration of the worlds of Puyo Puyo and Tetris.

Without getting into any spoilers for the story in Adventure Mode, Puyo Puyo Tetris 2 does a great job of onboarding for newcomers to Puyo Puyo Tetris and also has some nice references to the first game’s story. One highlight of the Adventure mode here is the adaptive difficulty that changes based on how you play. Hopefully less people will run into difficulty spikes through this. The addition of a world map for the stages is also a nice touch.

In terms of offline game modes, in addition to the story in Adventure Mode, Puyo Puyo Tetris 2 includes single-screen and local wireless multiplayer, a robust Lessons mode, and a Solo mode that includes its own different ways to play. The Solo mode includes Versus, Skill Battle (the new RPG-like mode) Swap, Party, Fusion, Big Bang, and Challenge. Challenge mode has six interesting single player modes that test your skills. Swap has you playing both Puyo Puyo and Tetris on different boards with them swapping out while Party mode has items appearing to add even more chaos to the action.

Skill Battle is one of the main draws for Puyo Puyo Tetris 2. You select a team of three characters with their own skills and try to survive while dealing damage to your opponent. In Skill Battle, both players have HP and MP bars. Using skills consumes MP and your aim is to drain the opponent’s HP bar. I was skeptical of this mode initially but it is great in practice and adds multiple layers of strategy and even chaos to an already fast-paced experience.

During my time with Puyo Puyo Tetris 2 for preview, I didn’t manage finding anyone to test the online with but I’ve managed playing online a few times each day over the last few days on Nintendo Switch. I’m very impressed with how smooth the experience is. I tried Skill Battle and Duel against a friend in the UK and it worked flawlessly. When you set up the online you can even restrict things by connection quality which is always a welcome addition to any game with online modes. Sadly, there isn’t cross platform online play barring within the same console family. Since Puyo Puyo Tetris had online, I was hoping a sequel would allow cross platform online to ensure there always is an active community regardless of console.

Overall, Puyo Puyo Tetris 2 is easily one of the best puzzle games you can play today. It has a charming story, loads of game modes, a robust online experience, and more. While the additions and improvements might not seem like much for those who recently got the original Puyo Puyo Tetris, Puyo Puyo Tetris 2 is a must play for fans of Puyo Puyo, Tetris, or puzzle games. Hopefully the post-launch updates can eventually bring in support for cross platform play or add even more content for those looking to play Puyo Puyo Tetris 2 offline. As it stands, this is exactly the kind of game that suits the pick-up and play nature of Nintendo’s hybrid system perfectly and one that I ended up playing daily since getting it.