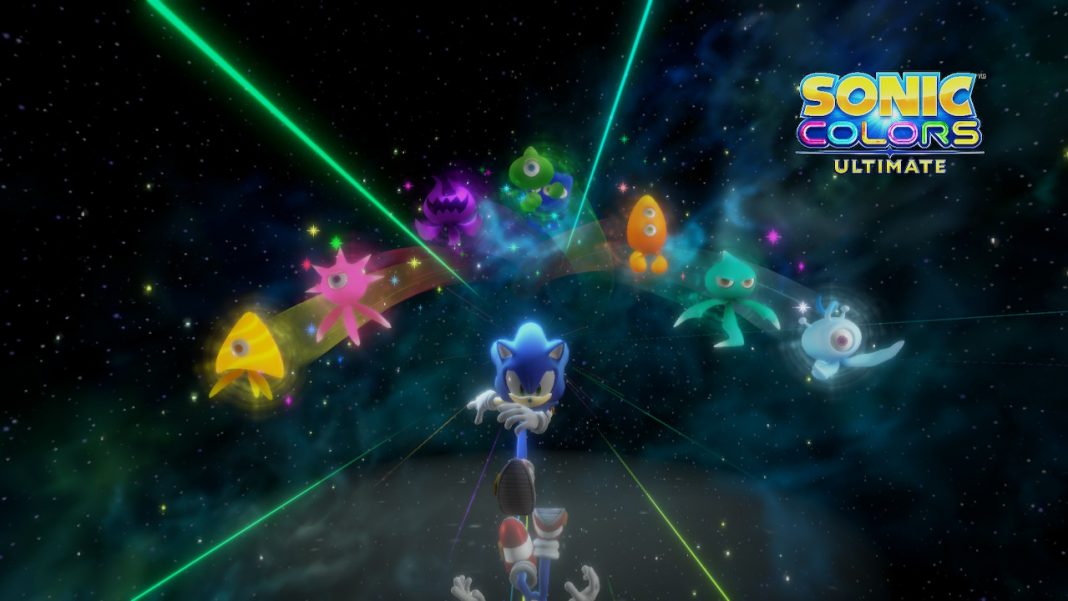 Having only experienced Sonic through 2D games right from the start and replaying the ones I enjoyed a lot, Sonic’s 3D releases had always been a curiosity for me until I tried out a bit of Sonic Generations and more recently Sonic Forces. While I did enjoy the little I played of Sonic Generations on Xbox 360 and 3DS, I never really finished a 3D Sonic game until Sonic Forces which I enjoyed despite its flaws. on both Nintendo Switch and PS4. Beyond those, the one game I always heard people mention for its music and when recommending older releases was the Nintendo Wii game Sonic Colors.

Sonic Colors Ultimate is a release that has elements of a remaster and some of a remake and it has finally let me experience Sonic Colors. Having now played through Sonic Colors Ultimate twice on Nintendo Switch, I’ve enjoyed a lot of what it has to offer despite a few annoyances. Since this was my first time playing Sonic Colors, I’ve treated this as a new game for me just like I did when I played Super Mario Sunshine and Galaxy through the 3D All-Stars collection. This review is based on Sonic Colors Ultimate version 1.03 that is the newest patch available as of this writing.

Sonic Colors Ultimate is set in a Dr Eggman’s interstellar amusement park where he has apparently turned over a new leaf. You start out with Tails exploring said amusement park where you discover Wisps, their powers, and what Dr Eggman is actually planning. I enjoyed the voice acting and writing for the most part but the cut-scenes are where Sonic Colors Ultimate is held back overall.

The core gameplay here transitions between 2D and 3D segments in various levels. There are even some slower portions of levels that are a detriment to the overall experience here. I hope the next Sonic game avoids any of these portions because Sonic’s momentum just feels wrong here. Sonic’s own high-speed movement and the addition of Wisps makes for a very interesting combination during the varied levels in Sonic Colors Ultimate.

In terms of other additions beyond the visual overhaul and the remixed soundtrack, Sonic Colors Ultimate features a new Jade Wisp that lets you pass through many walls and reach special areas. The Tails Save feature makes the game a lot more accessible while the Rival Rush mode is an unlockable mode that serves as a time attack. These aren’t essential additions but they make for a nicer overall experience.

On the technical side, Sonic Colors Ultimate targets 30fps on Nintendo Switch in both docked and handheld modes. It mostly manages this but some boss fights have a lot of stuttering and there are some random freezing or frame pacing issues I encounter on both my Nintendo Switch and Nintendo Switch Lite playthroughs. These weren’t as big of a problem as the glitches or lack of certain things appearing, but they are disappointing given the frame rate target being half of other systems already. Thankfully, the visuals themselves are mostly great with good motion blur. The one aspect of the visuals that is poor is the cut-scenes. The pre-rendered ones look bad compared to the in-engine gameplay.

It is worth noting that I’ve not run into the visual glitches that some people have reported with a lot of flashing but did have music cut out in some situations. This might be because I’ve not done the whole campaign in a single sitting across both my playthroughs, but I didn’t have those major glitches happen in the time I’ve been playing the game over the last week. Hopefully those issues do get fixed in a future patch as Sonic Colors is a game more people need to play.

Given how much Sonic Colors’ soundtrack has been praised, I’m glad that it actually lived up to that praise in Ultimate. I enjoyed both the original songs and remixes here with Planet Wisp music being top tier. It is however disappointing that there is no toggle for letting players choose only the original or remixed soundtrack to let those who prefer the original, play the game with the music they are used to. The big problem with the audio in Sonic Colors Ultimate is the overall mix and some specific audio cutting out. I wouldn’t recommend playing this with headphones until a patch with how poorly balanced the music and sound effects are. It is also disappointing that the audio options don’t let you adjust music and sound effects separately. You can change the voice language and adjust the volume of voices though but the music and sound effects are clubbed together.

Having now completed Sonic Colors Ultimate and checked out all the new content added over Sonic Colors, I liked a lot of what this package has to offer but a lot of the other stuff feels tacked on. The cosmetics and customization feel pointless given the gameplay. I’d have preferred full costume changes or model changes right from the get go.

Sonic Colors Ultimate in its current state, is a very good Sonic game that is held back by some bugs and the sound mix. The game itself has some things I didn’t enjoy like the slow bits in certain levels but I’m glad Sonic Colors has been brought to modern systems letting me finally play it after many of my friends recommended it and the soundtrack. After a few patches, this will be an easy recommendation on Nintendo Switch, but right now it has a big caveat thanks to a lack of polish that the game deserved on Nintendo’s hybrid system.