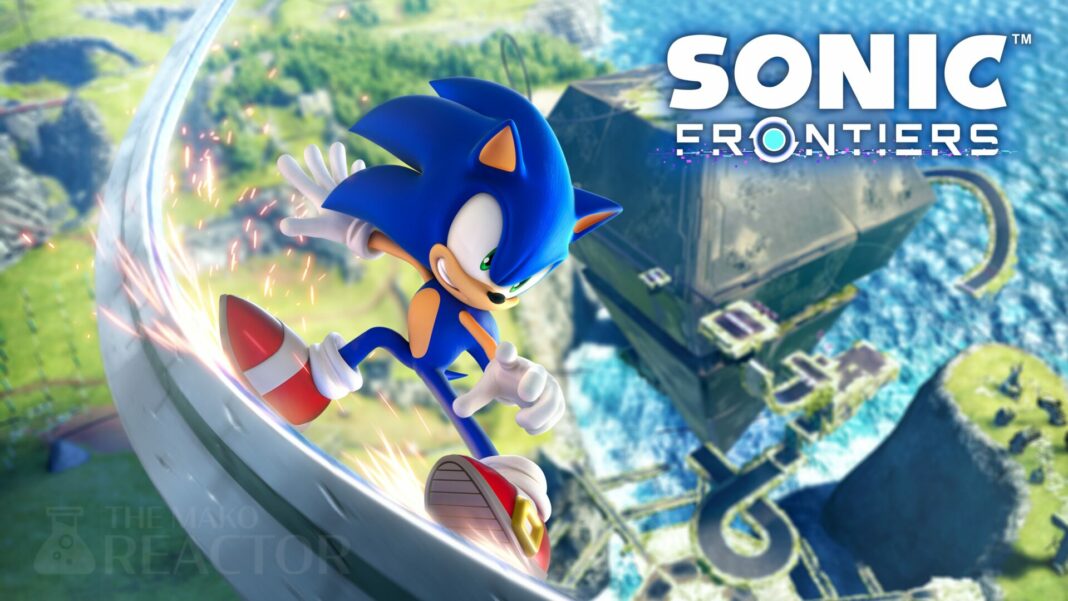 When Sonic Frontiers was revealed a while ago and shown off over time, I wasn’t sure what to expect of the new direction for the series. I was still hoping for a game I’d enjoy playing with great music because you can always count on Sonic games to overdeliver when it comes to music. Having now played Sonic Frontiers on PS5 thanks to an early code provided by Sega, I’m blown away by how much fun it is in so many ways, but also a bit disappointed in a few aspects of Sonic Frontiers. For my Sonic Frontiers PS5 review, I will be covering the game itself, the graphics options on PS5, the music, and why it is worth your time in this busy release season.

Before getting into any of the story, I was very impressed by how well certain elements of open world games worked with what I want from Sonic games in the Starfall Islands you spend your time in here. It takes a little while to get going, but once you get into the groove, Sonic Frontiers offers a lovely sandbox across the different islands with tons to do if you’re someone who likes exploring and completing everything you see. There are puzzles, collectibles, secrets, enemies, massive foes, and more spread across the islands alongside access to Cyber Space levels that deliver the platforming levels you likely are used to in Sonic games. In addition to all of this, there are also various side quests and mini-games as well.

Sonic Frontiers’ story was one of the biggest surprises. I thought it would just be a means to an end for the real draw which is the open zone platforming in the islands, but it was memorable with great voice acting. To progress through the story, you need to collect memory tokens initially, and try and rescue specific characters on the islands. These locations are full of challenges that act as puzzles or encounters that reveal more of the map that will guide you to make progress and try and uncover the mysteries each location hides.

Sonic Frontiers also gives you a lot of control over how Sonic feels in-game. This ranges from tweaking camera movement to your own speed and effects during boosting. The game settings let you adjust starting speed, initial boost speed, turning, boost turning, top speed, and more. It is very detailed and I was surprised to see so many options included for something like this. One thing I’d recommend checking right from the start is the blur effect under graphics options. I toggled it off and had a much better experience. Having it on almost gave me motion sickness in parts. I also increased the camera distance and angle all the way alongside tweaking the speed to my liking. I’m glad these options are included.

I was initially skeptical of how Sonic Frontiers would handle the open world elements given how few games manage holding my attention all the way. Immortals Fenyx Rising is a great example of how an open world like experience worked for me alongside Ghost of Tsushima, and Sonic Frontiers joins them in delivering a game world I kept thinking about even after seeing almost everything on offer in the 25 hours I’ve put into it across save files. Sonic Frontiers does have a few issues that range from technical ones to a few areas it could use some quality of life improvements, but Sonic Team exceeded my expectations with the complete experience.

Within each island, Sonic will run into specific characters who offer sidequests, guidance, upgrades, items, and more. The developers have peppered the islands with things to do, but I rarely felt like my time was being wasted here. After a short tutorial-like set of segments, you’re thrown into the proper open area where you have the freedom to explore, grind rails, collect rings, do puzzles, fight unique enemies, avoid the towering foes, and try and find your way through the story.

I was glad to have not paid much attention to Sonic Frontiers’ impressions and previews because it ended up surprising me constantly in a good way both mechanically and with the music. There are a few issues I expected with the open world elements, but I hope Sonic Frontiers serves as the base for the next few games. I enjoyed it that much. On paper, some aspects of the core gameplay loop might seem like busywork to some as you try and unlock keys, gears, and more on your way through the story, but the way the islands are designed made all of this a lot of fun and had me wanting to spend more time in each location rather than just trying to progress the story. There are some parts where I had traversal issues or couldn’t figure out how to reach a specific area because I wasn’t approaching said location in a specific manner, and this is my only real issue with the structure of parts of the islands.

Combat plays a huge part here. The skill tree, which is rather small, drastically changes how you will approach encounters as well. Some of the skills make taking on towering giant enemies a breeze, but I love how much freedom you have with tackling the different parts of an island here. Without getting into spoilers, you will find yourself on a specific path in parts later on, but this is very much a game you want to spend time in exploring and soaking in the atmosphere. The superlative soundtrack which I will get to in a bit, definitely played a huge part in my enjoyment of Sonic Frontiers.

Barring the skills that you can unlock by collecting Skill Pieces and gathering enough to power up a node on the skill tree, you also collect seeds that can raise your defense or attack. An NPC will power you up after you collect specific seeds. You also can find small cute creates called the Koco across the islands. As you gather more, you can upgrade Sonic’s maximum speed or ring capacity by talking to the Elder on the map. The combination of these upgrades, the freedom Sonic Frontiers gave me, and the various challenges available had me spending a bit too much time on each island before moving to the next one. I love it when games successfully bring in open world world elements and get their hooks in me thanks to an addictive core gameplay loop, and Sonic Frontiers managed to do just that.

If you’ve watched any of the trailers so far, you likely have seen the scale of the boss battles in Sonic Frontiers. Usually trailers make things seem cooler than they are in-game, but Sonic Frontiers’ encounters play out as well and make you feel like an absolute badass as you adapt your strategy on the go during the longer battles. There are moments it felt like Sonic Team wanted the player to feel like they are playing a PlatinumGames release with the spectacle and music. The blend of platforming, combat, and strategy in approaching parts of these encounters makes them memorable, but there is a sense of repetition here as I hoped for more kinds of these battles across the game.

Visually, Sonic Frontiers does a lot right. It looks gorgeous and runs very well (not perfectly though) in the 60fps mode on PS5. I played on my 1440p monitor so opted for the 60fps mode rather than the 4K mode that targets 30fps. The 60fps mode has cutbacks compared to the 4K mode, but it looked great on my monitor. The big problem with the game’s visuals is the pop-in that is noticeably not just in foliage, but also in rails, rings, and enemies. I hope this can be improved in a future update because it is very distracting and my main visual complaint with Sonic Frontiers. Performance was not bad, but I noticed dips in many areas from 60fps. I don’t have VRR on my monitor with the PS5, but it would’ve definitely helped here given the drops weren’t too bad, but were noticeable.

On the audio side of things, Sonic Frontiers very good English voice acting, but the soundtrack is the real star. It is easily one of the best Sonic soundtracks ever, and one of my favorites this year. The blend of upbeat boss themes, Cyber Space songs, and more atmospheric music actually done right unlike some other recent games makes me wish we didn’t have to wait until next month for the full soundtrack to release. The fishing song deserves a special shoutout as well alongside some of the songs that reminded me of Stranger of Paradise’s more memorable tunes. Either way, I definitely want to own this soundtrack on vinyl. It is that good. Speaking of the sound design, I also hope Sega eventually releases the Korone collaboration DLC in the West.

My issues with Sonic Frontiers in its current state have to do with some repetition that set in later on, a few portions of the islands not being intuitive enough when it comes to traversal, and the visual issues with pop-in on PS5. Everything else is at most a minor annoyance in an otherwise excellent and fun game. I do hope some of these in addition to the map interface can be improved through potential updates. There is one complaint I have with how certain elements of a later location were handled, but I can’t get into it for spoiler reasons right now.

Sonic Frontiers does many things really well and managed to deliver a lovely blend of open world elements and Sonic. It has been surprisingly fun almost all the way with a fantastic soundtrack, memorable boss encounters, and a very good story. Sadly, it has a few annoying issues with its design and visuals that hold it back. I hope it gets a few quality of life updates in future patches to address some of the issues I had with it, because this is one of the most fun games I’ve played all year, and even in this very busy release period, Sonic Frontiers had me wanting to keep booting it up to just spend more time in the world. Despite the few problems I have with it, I’m looking forward to replaying Sonic Frontiers on Switch and Steam Deck in the near future following my Sonic Frontiers PS5 review.