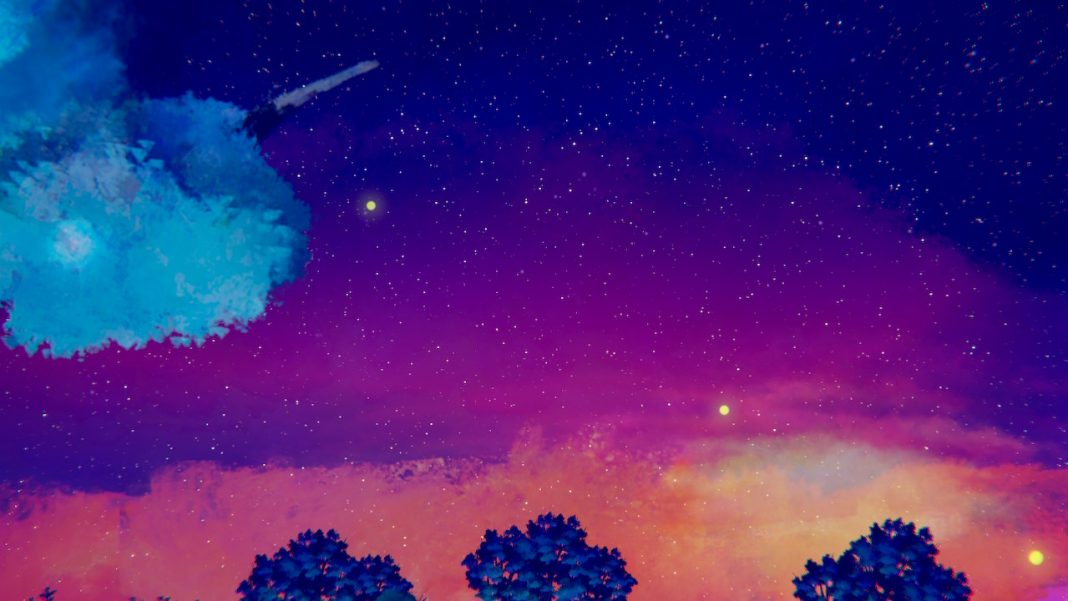 GameTomo’s gorgeous story heavy adventure game Sumire had my attention the moment I was shown the trailer with its colourful visuals and excellent music. It manages to tell an important story in its short runtime and even has some interesting replay value and quality of life features I didn’t expect in a game like this. The storybook format combined with the aesthetic and amazing soundtrack elevate Sumire to be one of the best recent games on Nintendo Switch and one I hope gets a physical release.

Sumire is a magical story about a girl named Sumire longing to meet her grandmother who passed away. Her parents split up and she now lives with her mother at home. Over time, Sumire has grown out of touch with friends, townspeople, and just feels lost in general. One day, she finds a mysterious seed in her room thrown by someone outside that breaks the window. She plants this in a pot at home and discovers a special flower who wants to improve everything and promises to help Sumire meet her grandmother. The catch is that the flower will only be alive until the end of the day so a lot of things need to be accomplished on this unforgettable day.

Without getting into spoilers, Sumire’s story involves meeting old friends, new people, various animals and inanimate objects that can now talk, helping others, maybe betraying others, and more. I love the freedom of choice you get here that affects your karma. In addition to those choices, there are hidden coins scattered across the land and you can use these for buying various items including cosmetics or specific key items you need to help others. I was surprised at how dark some of the story beats can get here as well. The choices you can make add to replay value as well. Expect a single playthrough to take about three hours.

Out of the side activities, some are basic fetch quests, others require bits of making choices, and one funny one involves you helping out in a race between a tortoise and a hare. What elevates even the most basic of these activities is the humour and well-written characters. There are also two mini-games you can play while going through the story. Your aim through all of this is to make the most out of this special day through accomplishing all the tasks you have planned for your perfect day to meet your grandmother.The story parts of the game have a pretty good mix of different things to do to not have you feel bored and the addition of fast travel early on is excellent. It saves a lot of time and is well implemented.

Right from when I saw the original trailer, I knew Sumire would be a gorgeous game but seeing it unfold in person was a whole other experience. There aren’t a lot of animations but the environments, characters, and transitions all complement each other well to make Sumire one of the nicest looking games in recent times. There isn’t any voice acting here but Sumire’s soundtrack by TOW is one of the most memorable soundtracks in recent times with almost ethereal instrumentation and vocals that fit the emotional moments perfectly.

There are a few things holding Sumire back on Nintendo Switch. While the game itself is slow paced, Sumire has random slowdown while moving and also long load times in some situations. I also ran into a few issues where it felt like the buttons weren’t as responsive while trying to make a decision or interact with something. Barring those, Sumire itself suffers from clarity between the foreground and background in some areas that makes progression a bit annoying.

Sumire manages to be well-paced, gorgeous, and is absolutely worth your time despite the flaws mentioned above. The reveal trailer sold me thanks to the art and music but the actual game has surprised me in the best ways possible. I love the characters, humour, and freedom you get while trying to make the most out of your limited time. Having recently finished it on Nintendo Switch and unlocked most of the achievements, I bought Sumire on Steam just so I could also own the soundtrack and artbook. If you enjoy memorable and emotional stories with a great aesthetic, Sumire is worth your time even on Nintendo Switch despite the few technical annoyances.