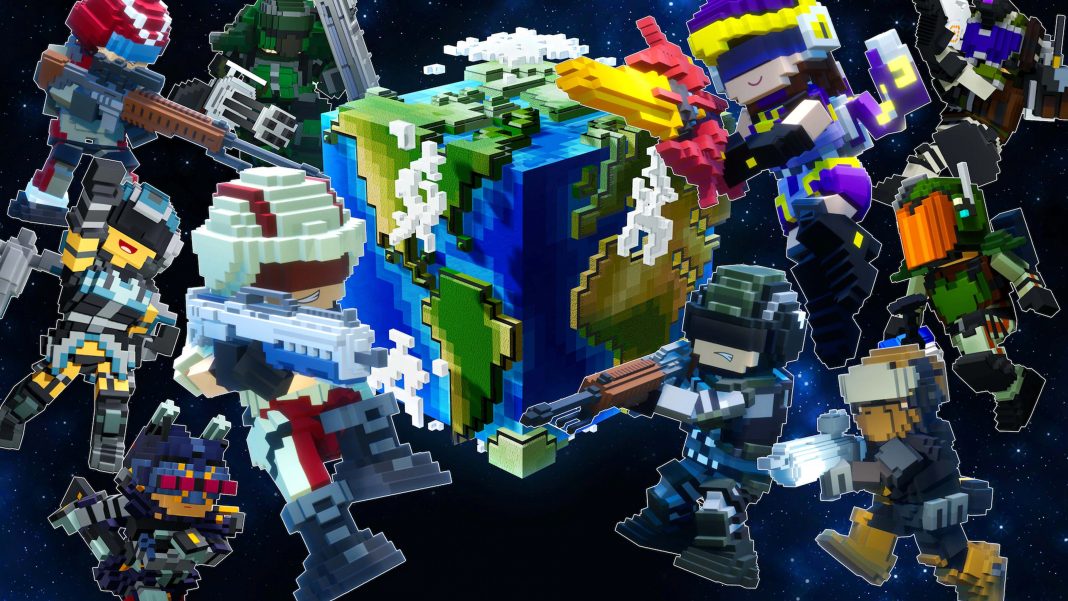 Earth Defense Force: World Brothers is set in a parallel world where everything is made of blocks. This results in a voxel aesthetic and the world that is now a big cube has been busted open into various smaller blocks by Dark Tyrant’s motherships. Your job as the Earth Defense Force is to restore this new world with the help of the various Earth Defense Force members you rescue across different locations. Despite the self-aware feel of Earth Defense Force games, there is a lot of breaking the fourth wall in this one. The outlandish nature of the premise and story also extends to the gameplay with how much customization and freedom you have approaching each new mission. I can’t wait to see how the DLC missions fare when they release very soon.

You play as a team of characters featuring an all-star cast from prior games and some new characters with more from D3 Publisher’s other brands being available as DLC here as opposed to a single character like earlier games. There have been a lot of changes to the core Earth Defense Force gameplay here but it still feels great overall. Instead of controlling just one character, collecting weapons or armor, and taking on the hordes of enemies, your team now has the ability to switch characters with the d-pad on the fly and it adds another layer of strategy as you plan switching based on skills, cooldowns, and class abilities.

You unlock new weapons by recruiting the random characters that spawn in each mission so there is a possibility you will not get a classic character you want until later on. Each character has their own main weapon, special skill, and ultimate that charges up over time. While there are a lot of characters, some lack good mobility options and this might hamper the pacing of the early levels. If you, like me, enjoyed using only the Wing Diver class for everything, you will definitely enjoy the Wing Diver here. The characters themselves range from bordering on parody or stereotypes from different regions of the world and even prior Earth Defense Force characters.

In terms of missions and difficulty, Earth Defense Force: World Brothers doesn’t push things too far like mainline games and it is on the easier side. It is great to see a lot of the larger enemies in this voxel aesthetic and the destruction but don’t expect Earth Defense Force 5 levels of craziness here. The best part about the main campaign missions is that the offline and online progress is shared so you can safely play with friends and then go back to playing solo without having to redo anything. In the missions I managed to play with friends online, I had no issues from India playing with friends in Europe and Japan.

Despite the colourful voxel aesthetic, Earth Defense Force: World Brothers feels like a true Earth Defense Force game with its destruction, enemy variety, scale, and more. Visually, it is going to be a love it or hate it experience for players given the aesthetic. Ever since I saw the first trailer, I was optimistic about checking it out. Having seen more gameplay leading up to the release and now played it, I quite like the visuals here for the most part. Sadly, there are some technical annoyances with the draw distance across the PS4 version (which I played on both PS4 Pro and PS5 through backward compatibility) being lower than expected. The silver lining is performance is a breath of fresh air compared to prior Earth Defense Force games on PS4 Pro and perfect on PS5 with faster loading. I’m a big fan of the destructible environments and the voxel redesigns for beloved Earth Defense Force characters and enemies.

On the audio side of things, Earth Defense Force: World Brothers surprised me with how much voice acting it has. I love having an English dub option in Earth Defense Force games since I’d rather focus on the gameplay than read subtitles when things get hectic but the sheer amount of voiced dialogue here despite some repetition is a lot. The music gets the job done in-game but is nothing to write home about. I will say that the post mission dialogue and music never gets old.

When it comes to feature set, the PS4 version of Earth Defense Force: World Brothers is the only one with splitscreen support for co-op play locally. The PS4, Nintendo Switch, and Steam versions all support online multiplayer but only the PS4 version has splitscreen. I can understand this being omitted on Nintendo Switch but not having it on PC is baffling. If you play Earth Defense Force: World Brothers on PS5 through backward compatibility, there aren’t any specific enhancements but the frame rate is rock solid and load times are much faster than the already fast PS4 Pro load times compared to Nintendo Switch.

My only complaints with Earth Defense Force: World Brothers have to do with some of the technical aspects. It feels like the developers were a bit too conservative with the PS4 version. The draw distance is quite low with enemies in the distance animating at a lower frame rate. While this isn’t remotely as bad as how things get on the Nintendo Switch version, it definitely feels like the visuals could’ve been a bit better for PS4 Pro. Barring that, the only real downside with Earth Defense Force: World Brothers is in how the core gameplay might not appeal to some people. If you already enjoy Earth Defense Force, you will find a lot to love here assuming you like the aesthetic.