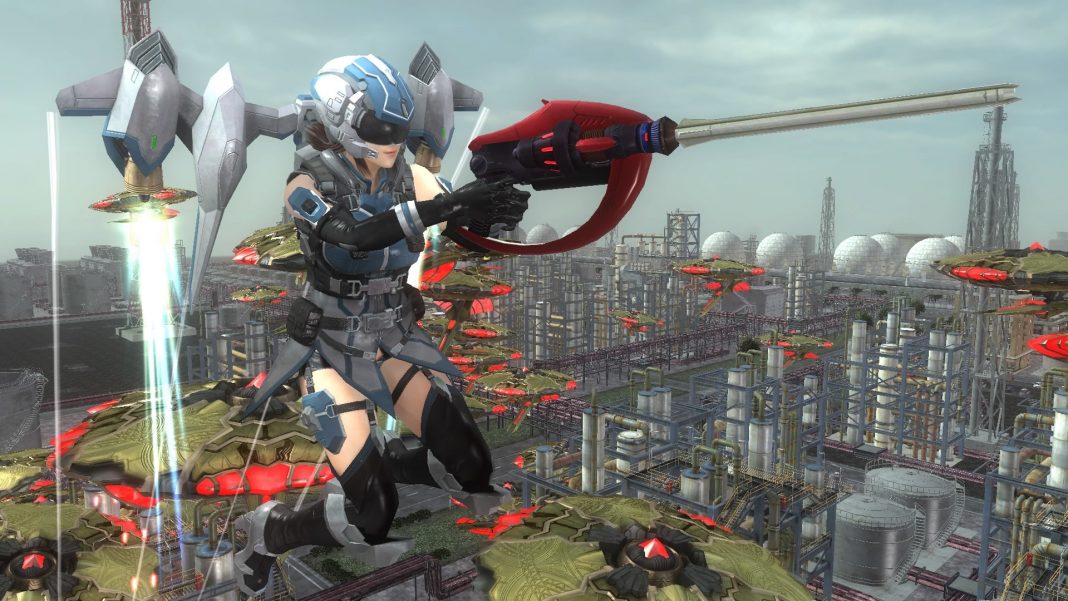 D3 Publisher’s Earth Defense Force franchise is a very interesting one for how it has evolved over console generations. The third-person shooter franchise has slowly become a cult classic that consistently gets ignored by the mainstream. I first got into the franchise through the PS Vita game Earth Defense Force 2: Invaders From Planet Space that was an expanded remake of the second mainline entry in the series. I was blown away by how much fun it was despite the massive technical shortcomings. In a lot of ways, I ended up sticking with the Earth Defense Force games as my podcast games. This franchise is perfect if you want to tune out and just have fun. Over the years, the series moved to PS4 and eventually PC as well and the newest mainline entry is Earth Defense Force 5 that debuted on PS4 in December last year before arriving on PC earlier this month.

Earth Defense Force 5 was originally revealed back in 2016 in Japan before it finally released there a year later. The West has had a rocky history with the franchise but thankfully it looks like D3 Publisher has gotten things sorted out for the series in the West more or less with consistent localisations and now PC ports. Earth Defense Force 5 is in a lot of ways the best entry point to the franchise. Unlike earlier entries, it is set in a new timeline where the EDF are a military organisation. The plot eventually becomes your typical B-movie fare with over-the-top action and beyond cheesy dialogue that all contribute to the charm of the game.

Progression is fairly straightforward. You have over a 100 missions that are playable offline and online and your aim is to exterminate the monsters with a massive set of weapons that you will slowly unlock through missions. After selecting your class, you are thrown into a basic tutorial that lasts a bit too long for its own good. The real fun begins when you find yourself surrounded by hundreds of giant bugs and you fire with everything you have to try and escape. The one downside to progression is that the online and offline missions are not treated the same. If you’ve played through half the offline missions and want to play online, you will be forced to do the earlier missions as well with the game scaling its difficulty and enemies to accommodate for you and your allies.

One aspect I loved about Earth Defense Force 4.1 was how enemy types had better introduction missions where they eased you in. Earth Defense Force 5 has a nice selection of varied enemy types but the introduction to many of them isn’t great. You might find yourself wanting to turn the difficulty down a bit in some of the later missions unless you’ve played an Earth Defense Force game before. The enemies that are like mutated frogs are pretty annoying early on but anything that keeps spawning enemies until you destroy feels poorly thought out compared to the rest of the great enemy design.

Earth Defense Force 5 has two major improvements that make it hard to go back to earlier games. The first is the fact that you don’t need to redo missions with different classes to level those up. The health upgrades and weapons are now persistent across your save so you can switch to any other class without worrying about being destroyed. The second big improvement is in how the Wing Diver that is already the best class, gets a nifty feature with a boost that can be used to dodge out of difficult situations.

The PC port isn’t perfect though. When it comes to graphics options and display options, don’t expect anything above the bare minimum. You can play windowed or fullscreen and select the resolution. While playing in fullscreen, the game sometimes ran flawlessly but replaying the same mission later on had very erratic performance. This wasn’t an issue while playing windowed at all. For graphics, you can set anisotropic filtering, shadows, and anti-aliasing. One area the PS4 and PS4 Pro versions suffered was with aliasing.

Thankfully, the PC version allows for much better image quality even with the barebones options menu. I had no trouble running at basically the same performance as the PS4 Pro version (which isn’t perfect) with the AA turned on and decent anisotropic filtering on a laptop that has an Intel i7-4750HQ at 2.00 GHz, 8GB RAM, and a GTX 950M with 4GB VRAM. I also had no screen tearing which was another problem with the PS4 version.

The visuals themselves aren’t amazing by any means. Instead of using whatever horsepower was available in the PS4 and PS4 Pro to push visuals like the spin-off Earth Defense Force game that followed this one, D3 Publisher and developer Sandlot opted to just go completely crazy with the amount of enemies and destruction possible in a single level.

In terms of controls, Earth Defense Force 5 is best played with a controller overall but the keyboard and mouse setup is very good. The only area this falters is when you need to use vehicles as a controller provides a much better experience.

When D3 Publisher decided to self-publish and handle the localisation of Earth Defense Force 5, I was a bit concerned because Xseed Games did a fantastic job with the PS4 and PS Vita games in the past. Thankfully, the game sounds and feels exactly like an Earth Defense Force game complete with an English voice acting option.

When it comes to the online mode itself, it works very well. I had almost no trouble playing with a friend for a few hours. There was no lag and no performance penalty for me. The only problem is the invite system isn’t well thought out. I’d recommend just setting up a room and asking your friends to search for it rather than getting into the invite system that isn’t reliable.

Overall, if you’ve not played an Earth Defense Force game on PC yet, this is the one to get for sure. It has a ton of bugs and unlike most games, most of the bugs here are intentional. It is disappointing to see the online mode and balance remain its own thing versus the offline campaign though. Hopefully the next mainline entry sorts out the multiplayer issues and some of the port quirks because this is pretty much the best Earth Defense Force game out there and it is priced much lower than the console release as well.