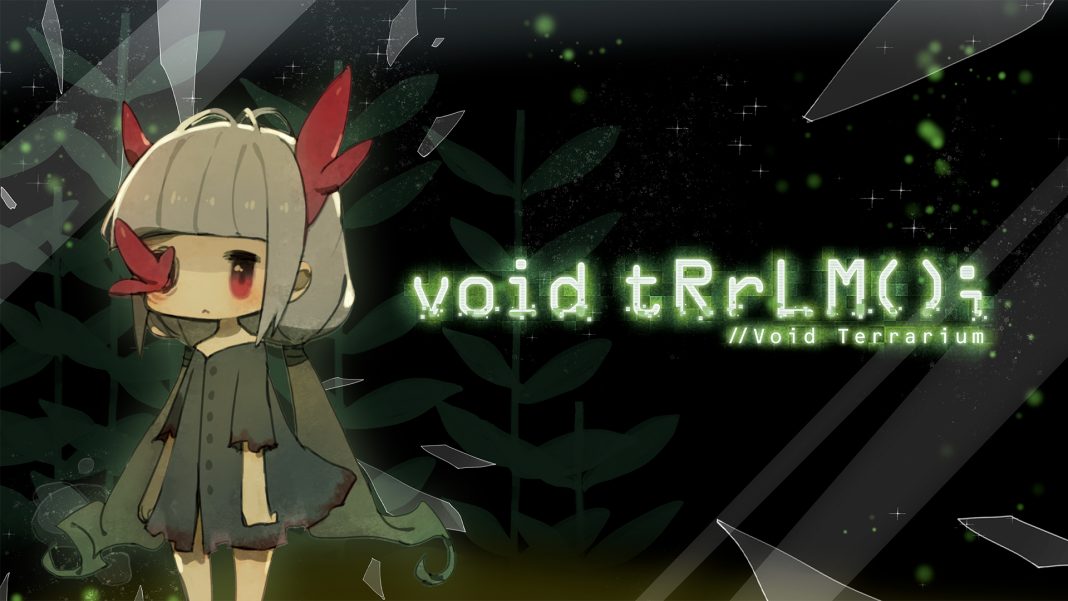 Over the years, NIS America has slowly been bringing Nippon Ichi Software’s smaller games to the West on multiple platforms. The first of these smaller titles was The Firefly Diary on PS Vita a few years ago. That game had gorgeous art and great music but faltered in delivering fun gameplay. That game was directed by Masayuki Furuya who eventually went on to make A Rose in the Twilight. With each new game directed by Masayuki Furuya, the overall package improved in delivering an emotional story through art and music. This tradition continues in Void Terrarium or void tRrLM(); as it is also called.

Void Terrarium is a roguelike set in a world contaminated by toxic fungi. You play as a robot who wakes up in a scrapyard to find a young girl named Toriko sleeping. You also meet an AI who helps you out initially as you go through the motions and learn the core game flow. The narrative progresses each time you successfully reach your goal through crafting or finding something specific in the dungeon.

Your aim in Void Terrarium is to take care of Toriko and keep her alive. You explore dungeons to find various parts and items to help Toriko survive the contaminated world. As you progress, you will find more items to give Toriko in her terrarium where she remains safe for the time being. This aspect of Void Terrarium adds a Tamagotchi-like mechanic to the mystery dungeon-style adventure.

As the robot, you spend time exploring ruins in the wasteland that change every time you enter. These are full of all sorts of enemies like robotic machines to slug-like creatures that corrode you upon death initially. The layout including all items, warp points, and traps changes every time you enter. The good thing about Void Terrarium is that death is not the end. You get incapacitated and are brought back to the terrarium with your items converted to resources. Your aim is to get deeper in every attempt and you learn by experience here.

Many roguelikes and mystery dungeon-style games are far too punishing for newer players. The Pokemon Mystery Dungeon games are great at introducing players to these mechanics and Void Terrarium takes things a step further with a compelling story with great visuals. When it comes to difficulty, Void Terrarium starts off a bit hard but the difficulty curve smoothes out soon after and is well balanced later on.

Visually, Void Terrarium looks great across the board. Everything from text boxes in the interface to character designs and dungeons look consistently good. The atmosphere in general is excellent and it is complemented well with the soundtrack.  There are some gruesome visuals though involving diseases though.

Hajime Sugie (The Firefly Diary, A Rose in the Twilight) composed and arranged the music in Void Terrarium. The soundtrack is great with a very ethereal feel. The songs range from atmospheric melodies to more upbeat songs in dungeons. Right from when the game was announced for Japan, I knew Void Terrarium would deliver on the visual and music side of things. It is good to see both of those aspects come together so well in the actual game as well.

There are two things here that might turn people off. The first is the performance. The game runs fine for the most part in dungeons but there are frame pacing issues that make it feel a bit unstable. Barring this, the only real issue I can see some people have is the mystery dungeon gameplay. It might feel repetitive for those who aren’t used to the structure.

Overall, Void Terrarium is easily one of my favourite roguelikes with its gorgeous art direction, great music, and competent dungeon crawling. While I was hoping the minor performance issues from the original Japanese demo I played would be ironed out, they don’t really hinder the experience much. Void Terrarium manages to deliver everything I wanted from it. The low asking price also helps make this an easier recommendation for anyone looking for a unique setting for their next roguelike. This is easily one of my favourite games from NIS America and one of the better roguelikes on Nintendo Switch.