Developed by Kojima Productions and published by Sony, Death Stranding is out for the PS4 soon. It also is game director Hideo Kojima’s first game following his public split from Konami after Metal Gear Solid 5: The Phantom Pain. Sporting an all-star cast with the likes of Norman Reedus, Guillermo Del Toro, and Lindsay Wagner as well as an intriguing setting and story, it’ll be interesting to see how Death Stranding is received by fans and newcomers to Hideo Kojima’s games.

Thankfully you won’t have to wait too long to find out. From Death Stranding reviews to its release date and everything in between, here’s what you need to know.

In our Death Stranding review we rated Hideo Kojima’s latest to be his best yet scoring it a near perfect 9.5/10. Find out why in our review. 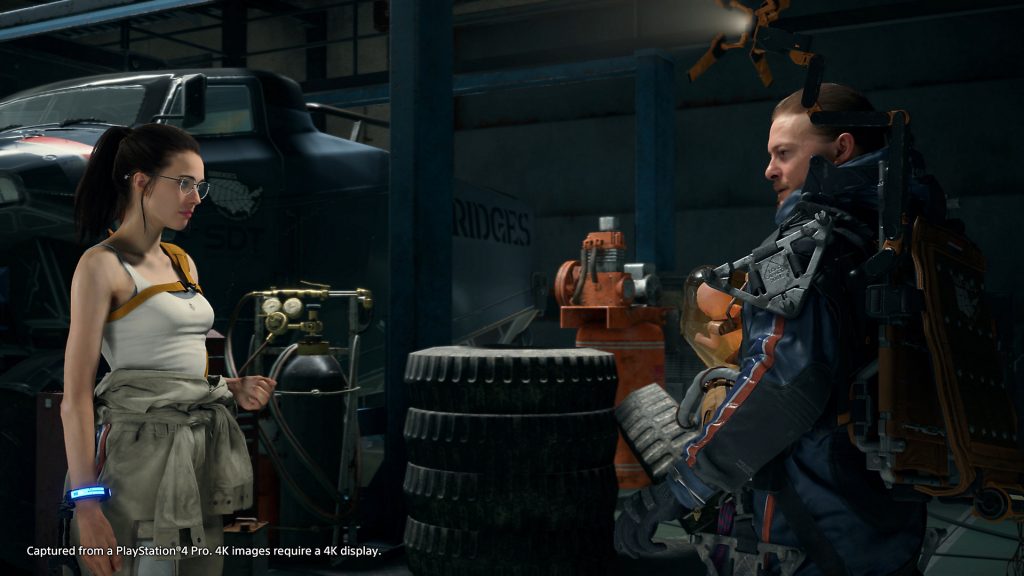 While reviews will be live from November 1, the Death Stranding release date is November 8 for PS4. There’s a PC version in the works as well with a more nebulous summer 2020 release window.

Sony revealed the official launch trailer for Death Stranding. Watch it below.

At TGS 2019, Hideo Kojima gave us our first proper glimpse of Death Stranding gameplay. Clocking in at around 49 minutes, Death Stranding appears to have more in common with Legend of Zelda: Breath of the Wild than Kojima’s past works like Metal Gear Solid. This is far from a bad thing depending on your gameplay preferences. That said, the emphasis on traversal and exploration complete with a durability mechanic (for your shoes, not weapons) and sinister beasts to battle are some interesting elements to contend with.

In addition to this, Death Stranding features varied landscapes along with slick menus and vehicles aplenty. During the gameplay session, Kojima showed off different ways of getting around such as a bike, hijacking a truck from an enemy camp and sledding across terrain. There are even safe houses and springs in the game world that let you recoup after intense encounters. Check it out here.

The original soundtrack for the game is up for pre-order on iTunes. Details as follows:

There’s a tie-in album as well, featuring the likes of Khalid and Chvrches. 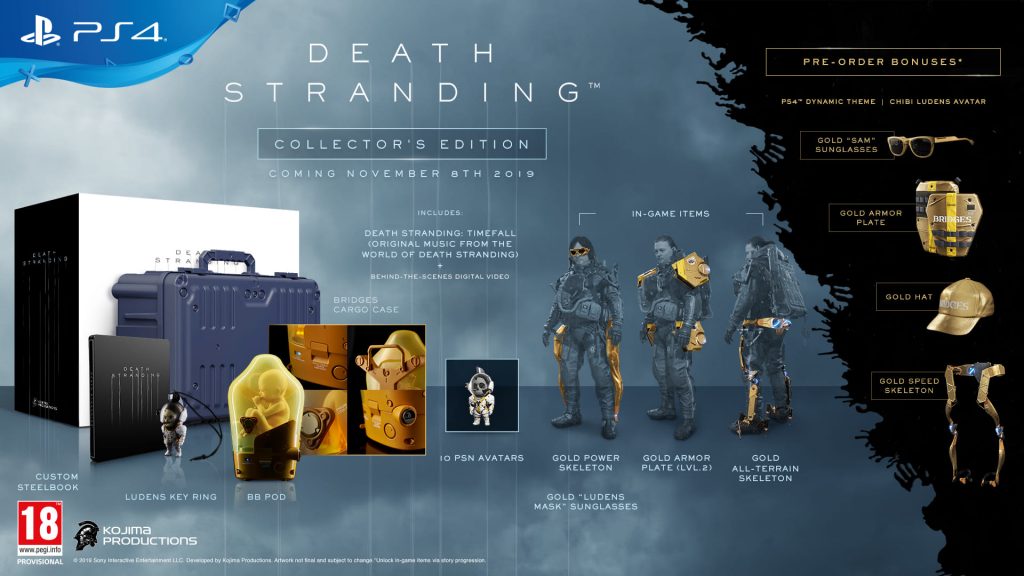 Will Death Stranding Collector’s Edition and Special Edition be available in India at launch?

Given Sony’s track record with God of War and Spider-Man PS4, we’re not exactly sure that it will be able to get anything more than the standard edition of the game on time. That said, it did manage to bring Days Gone’s Special and Limited Editions on time so perhaps things have changed at Sony in India. At the moment only the Death Stranding Special Edition has been confirmed for an India launch with the Death Stranding Collector’s Edition skipping the country altogether.

Considering Sony is yet to confirm if standard editions have a reversible cover, the Higgs variant could be the one to buy if you’re not looking to splurge on the Death Stranding Special Edition or Collector’s Edition versions. 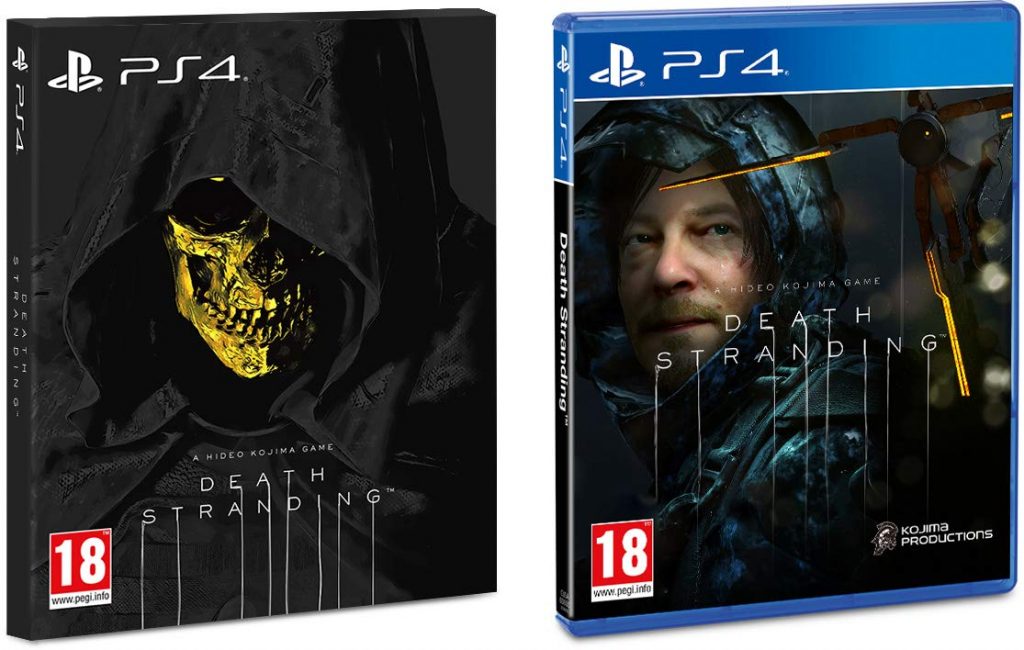 At the moment, the Death Stranding Standard Edition Higgs Variant will be available to specific European retailers like Game Spain and Amazon UK. As India falls under Sony Europe’s jurisdiction, there’s a possibility that select retailers here may get this version at a later date.

Several Indian retailers speaking to The Mako Reactor have stated that only the golden sunglasses that are packed in with the Death Stranding Special Edition are making it to India. According to them Sony has not confirmed the other pre-order bonuses for the country. Considering the post-release controversy surrounding pre-order bonuses for Spider-Man, this may be a move to avoid similar backlash.

At Sony’s State of Play PS4 event the company revealed that Death Stranding is getting the special edition console treatment much like Hideo Kojima’s last game, Metal Gear Solid 5: The Phantom Pain. The Death Stranding PS4 Pro Limited Edition console features a unique design and ships with a semi-transparent yellow DualShock 4 controller as well as a copy of the game. The Death Stranding PS4 Pro Limited Edition price is $400 (around Rs. 28,000) similar to past collector’s edition PS4 Pro consoles. It’s out the same day as the game, November 8.

At the moment, Sony is yet to confirm if India is getting this variant of the PS4 Pro. We’ve got in touch with the company and will update this story if we hear from it. That said, if it’s anything like its past efforts, expect a price of Rs. 49,690 or so, which is what the Spider-Man PS4 Pro Limited Edition console retailed for. Considering the standard PS4 Pro with a second controller is almost Rs. 12,000 cheaper, that’s definitely the better deal assuming Sony India stick to past pricing.

As for an India release date of the Death Stranding PS4 Pro Limited Edition console, we won’t be surprised to see it hit the shelves well after release if Sony’s past record with PS4 Pro special variants is any indication.