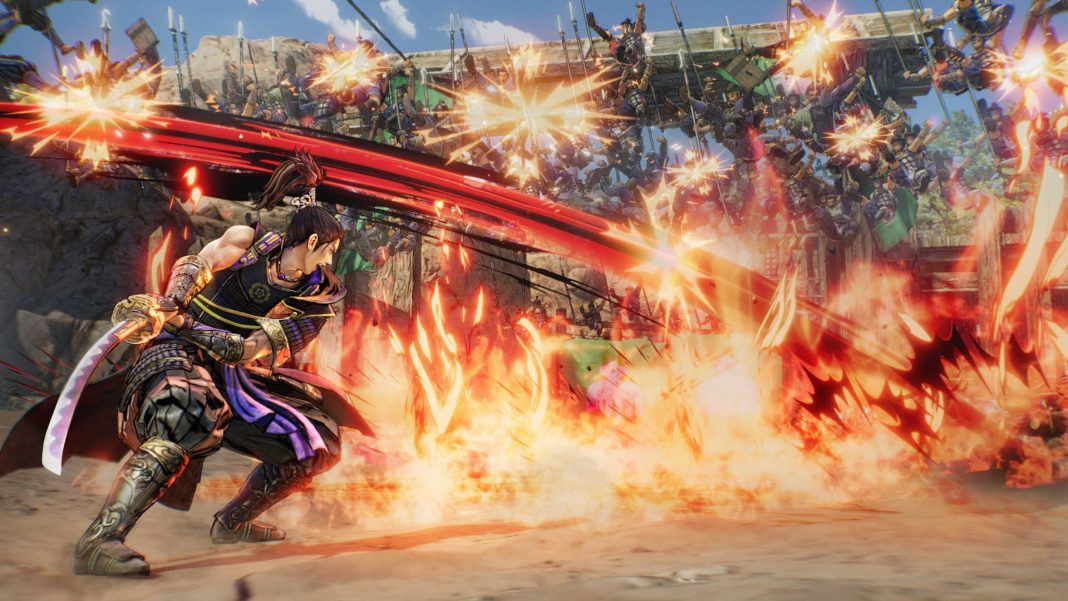 Samurai Warriors 5 releases in the West late next month on PS4, Xbox One, Nintendo Switch, and PC and it is aimed as a re-imagining of Koei Tecmo’s Samurai Warriors series. Samurai Warriors 5 is the fifth mainline entry that features an all-new story, a gorgeous aesthetic, enhancements to the combat flow, and more.

I wanted to focus on the gameplay, visuals, and PC-specifics for this preview. When it comes to the graphics settings, Samurai Warriors 5 has quite a few of them but many are just toggles for enabling or disabling something. The graphics settings also include display settings. You can play windowed or fullscreen and adjust the screen resolution and V-sync here. The V-sync option lets you disable it or cap the frame rate to 30 or 60. Samurai Warriors 5 doesn’t support frame rates above 60fps right now.

Barring the display options under graphics, you can adjust the level of characters, textures, detail, and shadows from low to high. Ambient occlusion, anti-aliasing, decals, grass, bloom, outlines, terrain, and fog can be turned on or off. You can check the comparison screenshot to see how Samurai Warriors 5 looks with everything at low or off and compare it to how the game looks with everything on and set to high where applicable at 1080p. In this early PC build, there are no render scale options or more settings.

While I’ve mostly been playing Warriors games on PS4, PS4 Pro, Xbox One X, and Nintendo Switch for review over the years, I’ve recently bought and checked out Samurai Warriors: Spirit of Sanada, Samurai Warriors 4-II, and even Dynasty Warriors 7 recently on my laptop and managed to run them with mixed results. I wasn’t too pleased with the conversions overall but was hopeful for Samurai Warriors 5 on PC given it is a modern release from Koei Tecmo and Omega Force and because Koei Tecmo PC ports have been improving in recent years with the likes of Atelier Ryza 2 being a massive jump over the console versions.

On a laptop with an AMD Ryzen 5-3550H processor (2.1GHz Base speed up to 3.7GHz), 16GB DDR4 RAM, and an Nvidia GeForce GTX 1650 4GB GPU, I managed getting a locked 1080p and 60fps with everything enabled and turned to maximum from the PC graphics settings. The performance was great but the one area I was disappointed so far is portions of the environment in the distance. A lot of the areas still look aliased and could’ve been done with higher quality textures. The actual enemy grunts, your own characters, animations, and particle effects are very well done and look great in motion.

I was pretty surprised at the locked frame rate across the board and quick load times but finally managed to make the frame rate drop below 60fps when I played in co-op splitscreen on the same laptop with two controllers attached to see how it looked and ran. The drops were to the low 50s from 60fps. This could be easily fixed with turning some of the settings down for a locked 60fps even when played in splitscreen. On the performance side, I’m very pleased with Samurai Warriors 5 so far. Hopefully the visuals for some aspects of the maps can be addressed in future updates or hopefully we get a supersampling option to clean up the image further.

Samurai Warriors 5 only includes button prompts for the Xbox controller in this preview build. You can customize the buttons in both control options as well right now which is good to have. I also tested Samurai Warriors 5 on PC with the PS5 DualSense controller and while it worked fine, there were still only Xbox button prompts as mentioned above.

Right from the first reveal for the game at the Nintendo Direct, I was interested to see how the aesthetic inspired by Japanese ink paintings would translate to such a fast-paced game. I was excited to play a new mainline Samurai Warriors game after how awesome Samurai Warriors 4 is. In the time I’ve spent over the last week, I can’t wait to play more but there is one aspect that feels a bit too safe so far.

Visually, the characters look great and are animated very well. I love the portraits and the way the aesthetic oozes charm through the interface elements here. Samurai Warriors 5 is a very good looking game outside of some parts of the maps. The particle effects fit perfectly and there are a lot of character interactions so far. As mentioned above, performance has also been great so far.

In terms of preview build content, I was allowed to talk about and play the first two chapters of the campaign here. I also managed replaying earlier stages on a higher and lower difficulty and with local co-op to see how the game runs and felt. While Koei Tecmo managed to re-imagine Samurai Warriors with this gorgeous aesthetic, the structure remains similar to prior entries with you having to do the usual Warriors game objectives like capturing forts, clearing out officers, taking on a boss, and more. This feels even more familiar given the map layout. I was hoping for more varied maps but it is possible that later stages have more interesting layouts and objectives.

When it comes to the 1 vs 1000 combat I love about these games, Samurai Warriors 5 is a joy to play with the new attacks that not only look flashy but also add a layer of strategy with how you can customize things. You also have weapon upgrading, character skill level upgrades, a skill tree, and more here. The only downside so far is in how safe the maps and some aspects of the core gameplay are. As a re-imagining, I expected a few more changes and additions. These could be present in later chapters though.

In the time I’ve spent playing Samurai Warriors 5 on PC, it has the potential to be my favourite game based on the aesthetic, how well it looks and runs, and with how much fun the gameplay and additions are. I can’t wait to play more and also check out the console versions as we get closer to the Samurai Warriors 5 release date on July 27 for PS4, Xbox One, Nintendo Switch, and Steam.