The Mako Reactor
Home Features The Legend of Heroes: Trails From Zero PS4 vs Nintendo Switch vs... 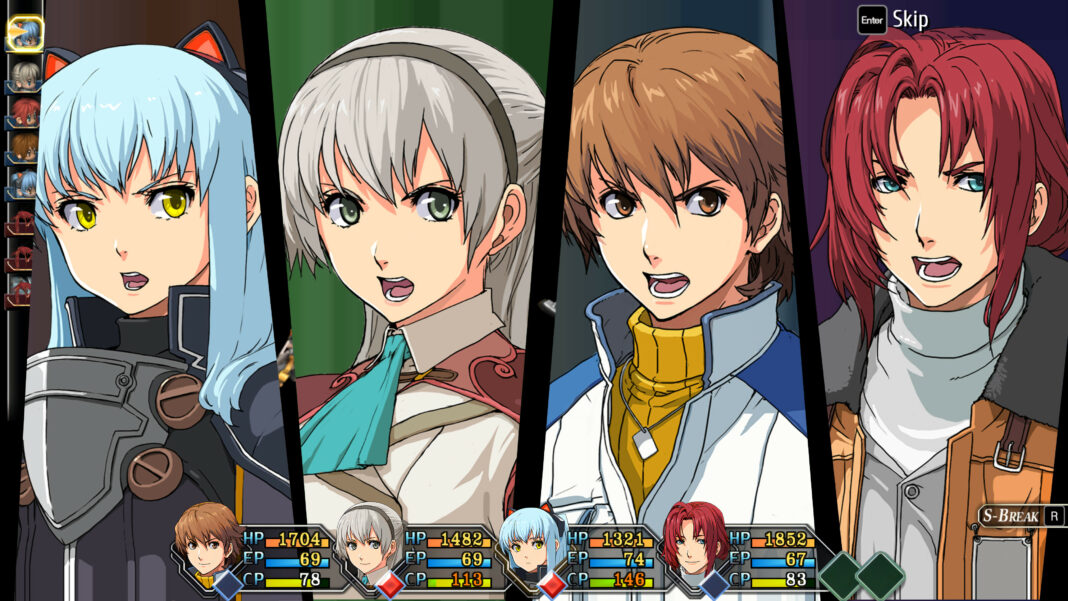 Updated on September 23 at 8 PM: I’ve updated this Trails from Zero PS4 vs Nintendo Switch vs PC with the new features added to Nintendo Switch from the PC version in version 1.3.5.

At the Falcom 40th anniversary concert, NIS America and Falcom revealed a localization of Zero no Kiseki as The Legend of Heroes: Trails from Zero for PS4, Nintendo Switch, and PC. The Crossbell Duology (Trails from Zero and Trails to Azure) localization is happening in partnership with Geofront as detailed here. Trails from Zero (Zero no Kiseki in Japan) debuted in Japan in 2010 on PSP before seeing a PS4 release a few years ago. Trails from Zero has had quite the history for over a decade across different platforms and publishers over the world. NIS America has now brought it to three platforms in the West simultaneously, which has resulted in one version being lesser even though it served as the source for others. For this Trails from Zero PS4 vs Nintendo Switch vs PC feature, I will be comparing the game on all platforms across features, visuals, and what version you should buy if you have access to multiple systems.

It is worth noting that I did my testing with the PS4 version played on PS5, the Nintendo Switch version played on my OLED model, and the PC version played on my laptop and also Steam Deck through review codes provided by NIS America. The screenshots are all from the early parts of the games or from portions later on without any spoilers, so don’t worry about having anything spoiled here. I’ve updated this feature as of today with the version 1.5.3 Switch patch that brought in three new features.

Trails from Zero PS4 vs Nintendo Switch vs PC – why are there different features?

Trails from Zero for PS4 in the West is Falcom’s Japanese release from 2020 with the English localization added. It has not had any new features or improvements. PH3 who handled the excellent recent Falcom PC ports took over porting duties for this on not just PC, but also Nintendo Switch. This allowed the team to bring many of the improvements of the PC version over to the new Western Nintendo Switch version. Since NIS America opted to release all 3 platforms in the West at once, the PS4 version is lacking compared to the PC and Switch versions. I will discuss the major differences, but despite the PS4 version being the original release in this case, it now is a lesser release when compared to both Switch and PC.

As with prior PH3 PC ports, the developer goes above and beyond with features, and that is the case here. I’ve played every Falcom PC release involving PH3, and Trails from Zero goes a step above Ys IX: Monstrum Nox that has been my favorite PC conversion so far from the team. Trails from Zero, still has a few flaws right now on PC and Switch, but those have to do more with the game’s roots than this conversion.

The PS4 version of Trails from Zero has high-speed mode, and the option to use L2 or R2 for high-speed mode. That’s basically all you get in terms of quality of life improvements here. On Switch, you can choose whether encounters trigger when party leader touches and enemy, or any party member. You can enable fading animations on map transitions which is an amazing improvement added here. You can also disable the intro movie (with developer and publisher logos) on booting up the game to save time, change autosave interval, adjust UI scale from normal to large and also auto switch, choose whether to display condition icons for characters, and change various high-speed mode settings.

The UI scale is very useful, because the normal UI scale option is too small for a handheld, and I found the normal option only good for when I played on my monitor on the desk. I’d recommend using the new large scale option, because it is very well-implemented for Switch. The auto will adjust depending on whether you play docked or handheld.

In addition to those features above, with the version 1.5.3 update for Switch on September 23, the show BGM information and dynamic shadows options are also available on Switch alongside a new FXAA anti-aliasing option.

The high-speed mode on PS4 is a toggle, while on Switch you can set it to either work as a toggle or when you hold a button. You can also adjust the speedup factor in battle and on the field independently here. The PS4 version does not let you adjust any of this.

PH3 also went above and beyond with the input options. You can set the game to auto switch button prompts for Joy-Cons or Nintendo Switch Pro Controller, or choose whichever you like. You can also use a new inverted button prompt look and adjust button mappings here. There’s also a character glow option detailed here.

The final Switch feature not on PS4 is quite a big one. There’s a new message log now for reading the backlog with voiceovers. This is one of the best new features to be added to Trails from Zero on PC and Switch. It works better than how most games implement it as well. Features like this make me wish PH3 did more Switch ports for other Japanese developers, and I hope Trails from Zero’s Switch conversion gets more publishers to contact them for ports rather than release bare-bones conversions like we see from some developers on Switch.

(Updated on September 23: These previously PC-exclusive dynamic shadows and BGM information options are also on Switch now with version 1.5.3) In addition to all the Switch features that aren’t on PS4, the PC version has a few notable additions that are worth highlighting. Obviously the PC port has more options when it comes to frame rate and image quality, but the other features make it shine. In addition to all the features I listed above for Switch, the PC version has a new “Show BGM Information” option that displays the track name and soundtrack information when a new song plays. This is a fantastic feature that I hope is brought to prior Falcom ports from PH3. It saves me the trouble of using Shazam or something like that.

The second PC-exclusive feature that I wanted to highlight is the “Dynamic Shadows” option. This was seemingly only in the PS Vita “Evo” version of Trails from Zero that never released outside Asia and Japan. This feature adds to the experience in specific locations, and it is a lovely addition to the graphics feature set.

Trails from Zero PS4 vs Switch vs PC graphics

As detailed here by Peter “Durante” Thoman from PH3, the PC and Nintendo Switch versions feature tons of cleaned up textures and improvements across the board. The PS4 version feels like you’re playing a PSP game upscaled while PC and Nintendo Switch try and get it looking as good as possible on newer displays, but with one problem. There are some assets where you can tell the upscaling hasn’t been done in the best possible way, or some elements look off compared to the other parts of the scene. This is most noticeable with the UI icons in battle and some of the numbers in the interface during battle. These aren’t dealbreakers, but are the only issues I have with the PC and Switch versions. They are multiple times better than the PS4 version in its current state. The screenshots in the comparisons below use the large UI option on Switch (docked) and have the PS4 version played on PS5.

Some might prefer the raw look of the PS4 version, but having spent more than 60 hours across all three versions over the last few weeks, I cannot recommend the PS4 version to anyone if they have the option to play on PC or Switch. In addition to the differences detailed on the Steam blog post, I’m disappointed in how so much of the interface on PS4 is still low resolution compared to even the Switch version in handheld mode.

Trails from Zero PS4 vs Switch vs PC – what to buy?

In this specific situation, I cannot recommend the PS4 version to anyone who has access to a PC and/or Switch. For the last few Falcom games from NIS America, the PS4 version was always an easy recommendation over Switch, especially for games like Ys IX and Ys VIII to those who wanted the best console version. Despite enjoying my time with Trails of Cold Steel III and IV on Switch, the PS4 versions offered much better experiences for those releases. In this case, on the console side, the Switch version is massively better than PS4 thanks to the new features and visual improvements. It almost feels like playing a enhanced remaster of a PS4 game rather than one that has released at the same time with this Switch release.

The bigger question for those who own multiple platforms is whether to buy Trails from Zero on Switch or PC. If you care about portability, the Switch version is an excellent way to experience Trails from Zero, and it exceeded my expectations even from PH3 when it comes to features and performance. If you have a Steam Deck and a Switch, the PC version on Steam Deck will offer the best possible experience on paper, but the battery life and OLED display may push things onto the Switch side for you especially with more PC features added to Switch.

In an ideal world, you’d be able to sync your save from PC to Switch through Steam account like you can in other games, but right now that isn’t possible. I have no qualms about recommending either the PC or Switch version of Trails from Zero to anyone looking for a fantastic experience and to be able to finally begin Falcom’s Crossbell duology. This situation could’ve been avoided if NIS America released the PS4 version before instead of delaying it to launch on all three platforms simultaneously. The end result is Falcom fans in the West get a lesser version of the game on PS4 despite this version being the source for the PC and Switch versions.

Hopefully my Trails from Zero PS4 vs Nintendo Switch vs PC feature helped you decide where to buy the newest localized Falcom game. When Trails to Azure launches next year, the situation is likely going to be the same as here with PH3 handling the Switch and PC ports while the PS4 version will be the same as Falcom’s Japanese release when it comes to visuals and features.

The Legend of Heroes: Trails from Zero releases on September 27 in North America and September 30 in Europe for PS4, Nintendo Switch, and PC.