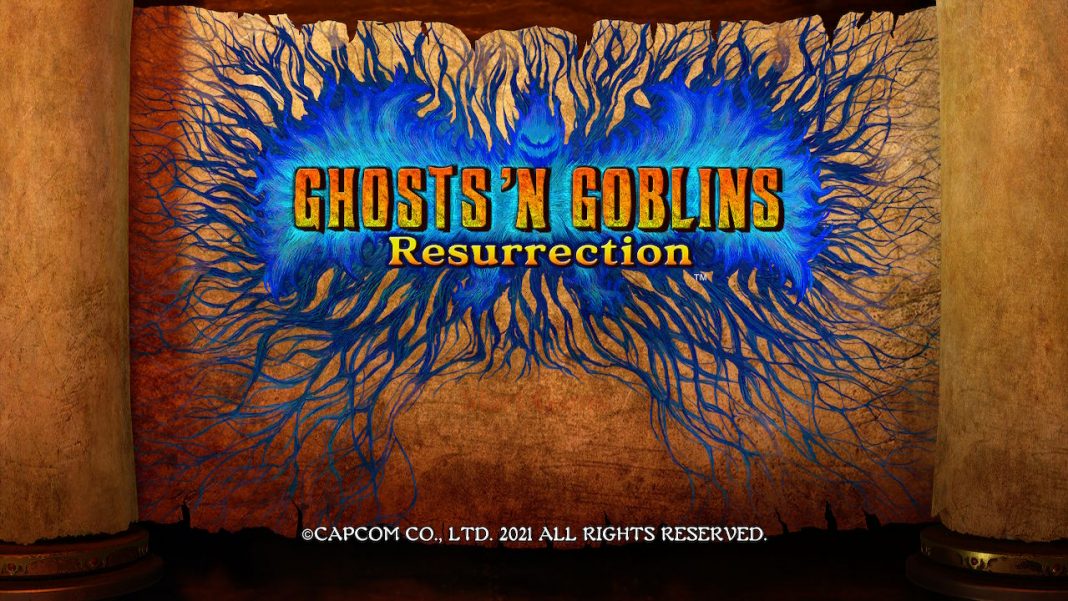 In recent years, one of the more surprising franchise revivals has been Ghosts ‘n Goblins Resurrection from Capcom. Originally revealed for Nintendo Switch during The Game Awards, Ghosts ‘n Goblins Resurrection has finally been released and it is a brutally well designed experience and one that feels like the franchise’s Mega Man 11 moment in a lot of ways. I wasn’t really sold on the visual style when it was originally revealed but I’ve grown to enjoy the storybook aesthetic Capcom was going for over time and the aesthetic works better in many of the later levels and once you get used to a few of the character designs and animations.

At its core, Ghosts ‘n Goblins Resurrection is a run and gun arcade style platformer that tries to punish you at every instance. You play as Arthur trying to rescue the princess through different hellishly difficult levels that reward you for experimenting. Ghosts ‘n Goblins Resurrection includes four difficulty options. The default options is Legend which will likely destroy you in the first level. The easiest difficulty is Page. If you’re a longtime fan, I’d definitely recommend trying Legend just to see how you feel but I ended up playing the most on Knight and Squire after struggling with one of the levels for a long time.

As you go to easier difficulties, Arthur can take more hits without needing to restart the area. Page (the lowest difficulty) even lets you infinitely respawn once you die making it basically god mode but you still need to traverse through the levels so it isn’t a completely easy mode. Both Squire and Page include a Magic Metronome option that lets you slow down things for an even easier experience. I think a rewind option would’ve helped a lot here as well. Maybe it can be added in a future update if it is feasible.

Barring the difficulty levels, Ghosts ‘n Goblins Resurrection also features local (and not online) co-op. In local co-op you can play on a single Joy-Con each on a Nintendo Switch and I found this much easier since the second player feels pretty overpowered and helps a lot but there will still be moments of frustration as both players learn the ropes of each level and enemy patterns for the first time.

As Arthur, you have various weapons at your disposal across the levels and even slowly unlock magic that definitely helps you a ton in certain situations. As you avoid traps, attack enemies, and make your way through levels that demand everything from you when it comes to platforming. The bosses range from being difficult but fun encounters to some being a pain because you have to rely on a lot of trial and error to figure out what to actually aim for and learn the attack patterns across long encounters.

One of my only complaints with Ghosts ‘n Goblins Resurrection barring the slight technical issues on Nintendo Switch is in how certain levels or boss fights feel like they go on longer than they should. Thankfully these aren’t a problem for the majority of the levels. Level checkpoints are also spaced well across the difficulties I spent the most time in.

The freedom you get with how you approach levels and how you customise Arthur is pretty great. Not only can you pick a different path within levels but you can also opt for different levels as you progress through the game. As you collect Umbral Bees during levels, you can unlock passive and active skills for Arthur, Umbral Bees show up either on the normal paths as you progress through levels but others have more difficult requirements. One thing to keep in mind is that there’s a lot to do still once you finish your first playthrough here.

Visually, I was initially not a fan of the aesthetic here. I still think some aspects of it don’t fit in with the rest of the art style but it looks very good in motion almost across the board. There are some instances of visual oddities when you see different parts of a boss’ body seemingly animate independently and making some things look robotic. Arthur’s run animation also doesn’t look great to me. I love the boss designs, later stages, and effects in Ghosts ‘n Goblins Resurrection though.

The one disappointing area is performance. While Ghosts ‘n Goblins Resurrection never drops to unplayable levels, it noticeably has some frame drops in certain stages. Hopefully these can be ironed out in future updates. I am pleased that Capcom included a HUD option for displaying or hiding parts of the interface, changing the size, and more. It is always appreciated in games that are on Nintendo Switch since most design for either docked or handheld play and call it a day.

On the audio side of things, I love the Ghosts ‘n Goblins Resurrection soundtrack and the sound effects. The music has some nice callbacks to older tunes and some even feel like modern takes on older soundtrack music just like the levels that give Ghosts ‘n Goblins Resurrection a remixed feel. Even when I was spending over an hour on a single level in Legend difficulty, I never got tired of the music and the implementation of HD Rumble for more immersion during specific sound effects and gameplay.

In future updates, one thing I would love to see is a turbo option. Not just for enemies but also Arthur because many players will feel like the movement is too slow initially as they adjust to the game. Eventually being able to tweak Arthur’s movement speed and the enemy speed independently would be a great quality of life improvement for players who want to either learn specific parts of levels or just get through the game quicker.

Overall, Ghosts ‘n Goblins Resurrection feels like a hybrid between a remixed game and a new entry with how it is inspired by certain older game levels. It is a ruthless game that will test your skills even on lower difficulties with the trial and error required. While it might not be as accessible as Mega Man 11 was for newer fans, Capcom definitely did a great job with making a new Ghosts ‘n Goblins game that tried to be true to its name while still allowing for some accessibility options for those who want a less brutal experience.