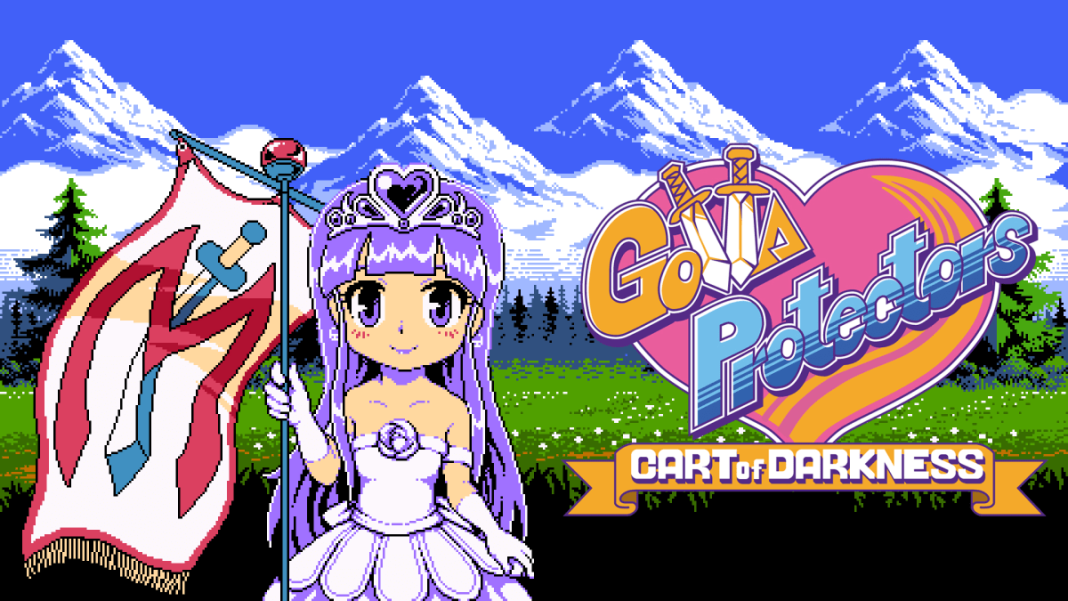 Over the years, the number of games released only in Japan with no Western release planned seemed to be reducing. There were always a few holdouts as usual, but it seemed like most notable games would see a release outside Japan on some platform or the other. One of the games that felt like it would’ve been localized sooner was the Nintendo Switch entry in the Gotta Protectors series. It took a few years, but we finally have it in the West as Gotta Protectors: Cart of Darkness and the wait has been worth it. I’ve been playing it over the last few weeks, but wanted to hold off on publishing my Gotta Protectors: Cart of Darkness review until I get to test out the online, and also try out the paid DLC which I bought on release day.

If you’ve not heard of this series, the Gotta Protectors (Protect Me Knight) series of tower defense action games began on Xbox 360 as a digital title. The second entry was released on Nintendo 3DS as Gotta Protectors which is when I discovered the series. A friend of mine described Gotta Protectors as “Dynasty Warriors gameplay if it was made on the NES”. I didn’t end up finishing all the content in the 3DS game, but was excited to try out the series again when the new game was revealed and released in Japan on Nintendo Switch. Gotta Protectors: Cart of Darkness has been localized by the amazing team at 8-4, and it is elevated quite a bit by the awesome writing and superb gameplay that works surprisingly well online.

Gotta Protectors: Cart of Darkness is a fine way to check out the series with its lower than expected asking price and it being available on a popular platform. It has references to the 3DS game, but you aren’t missing out by just playing this for now as a newcomer. The core gameplay has you controlling one of many playable characters. You begin by moving the princess onto the castle which itself moves towards the goal of the enemy castle. On this path, there are various enemies and checkpoints. Your aim is to keep the princess safe while the castle makes its way to the goal.

The levels get more complex as you progress through the campaign with light puzzles, train track puzzles, keys, and more. The enemy variety and strength also increases with each new level. At first, I wasn’t sure if Gotta Protectors: Cart of Darkness would remain as compelling as when I just started playing it, but the level design and enemy placement keep improving. There are some difficulty spikes, but nothing too bad.

In between levels that comprise a bigger stage, you use the coins you have collected to upgrade either your stats, attack, the barricades and other obstacles for enemies, and more. Any coins saved after completing a full stage can be used to upgrade your castle and buy skills. Each of the playable characters even at the beginning all have unique gameplay styles. There are also hundreds of cartridges with their own interesting additions to your repertoire that you can collect across the loads of levels here. The localization for these names is also another highlight. The comment about Gotta Protectors: Cart of Darkness feeling like a Warriors game if it was made for NES feels very accurate in many ways. As a fan of hack and slash games and the aesthetic in many older games, Gotta Protectors: Cart of Darkness manages to impress on all fronts.

Visually, Gotta Protectors: Cart of Darkness has gorgeous designs, animations, and environments. The tiles across levels and many of the larger enemies are superb. The real standout when it comes to the visuals is how the performance seemingly holds up really well even in later levels across co-op when things get too hectic to even see sometimes with how many enemies are on the screen at once. I would definitely buy an artbook showcasing the different animations of characters and enemy designs. I thought Gotta Protectors looked great on 3DS, but seeing it scale so well with its aesthetic both on handheld and TV is great.

In the localized release, Gotta Protectors: Cart of Darkness has both English and Japanese voice options. You can even change the voice style to sound like it was recorded for older systems or have a clear modern sound. Speaking of the sound, the music in Gotta Protectors: Cart of Darkness is incredible. I was going to buy the DLC for more levels, but the real draw is having different soundtrack options from older systems done by Yuzo Koshiro.

While the DLC is absolutely worth getting, the base game has enough content to keep you busy for a long time both solo and online with friends. The DLC and game itself also seem priced too low given the quality and content. I know the price in Japan was higher, and I’m glad that Ancient and the publisher for the West, 8-4, decided to keep the barrier of entry quite low for this release. While the game itself has a music player to listen to the soundtrack, each set of DLC unlocks the ability to listen to those songs in this player as well. You can listen to different in-game songs and change the instrument/console of choice to see how they sound across different systems as well.

While I have been playing Gotta Protectors: Cart of Darkness for a few weeks now, I wanted to try out the online play and the DLC properly before reviewing the game. While the latter is more than worth it given the content, I was surprised at how well the online play worked. I tried playing both wired and wirelessly with friends abroad in Japan and the USA over the last week. It worked flawlessly after waiting for it to synchronize before each level. I also like how progress is saved for all players and not just the host. This is a problem in some co-op games even today, but Gotta Protectors: Cart of Darkness has the online aspect nearly perfectly executed. I could see no way to invite someone to join my room using the Switch’s in-game invite system. Hopefully that can be added through potential patches.

Gotta Protectors: Cart of Darkness is a well-written and awesome pickup and play game. While the gameplay might be too repetitive for some, I enjoyed every bit of time I’ve put into it so far. I can’t wait to keep playing it online with friends over the coming weeks. Hopefully this does well enough to get ports of the first two games in some form because I’d love to try the first game and it would be great to have the 3DS entry on a modern system.

In its current state, Gotta Protectors: Cart of Darkness is more than worth the asking price. It might just be one of the best value packages on the eShop right now. The DLC is even better if you’re a fan of Yuzo Koshiro’s music. I already enjoyed playing Gotta Protectors on 3DS, but wasn’t expecting to get into the Nintendo Switch game this much when I started playing.

I’ve played at least a few stages of Gotta Protectors: Cart of Darkness each day since I was sent review code for it. It joins the likes of Slay the Spire, Grindstone, Fire Emblem Warriors, and other titles that I have in a folder on my Switch for easy access to always. I can’t wait to try out the later levels at higher difficulties and finish the remaining bonus stages from the DLC I bought last week. The wait for this in the West was very long, but a localization of this level makes it all worth it.