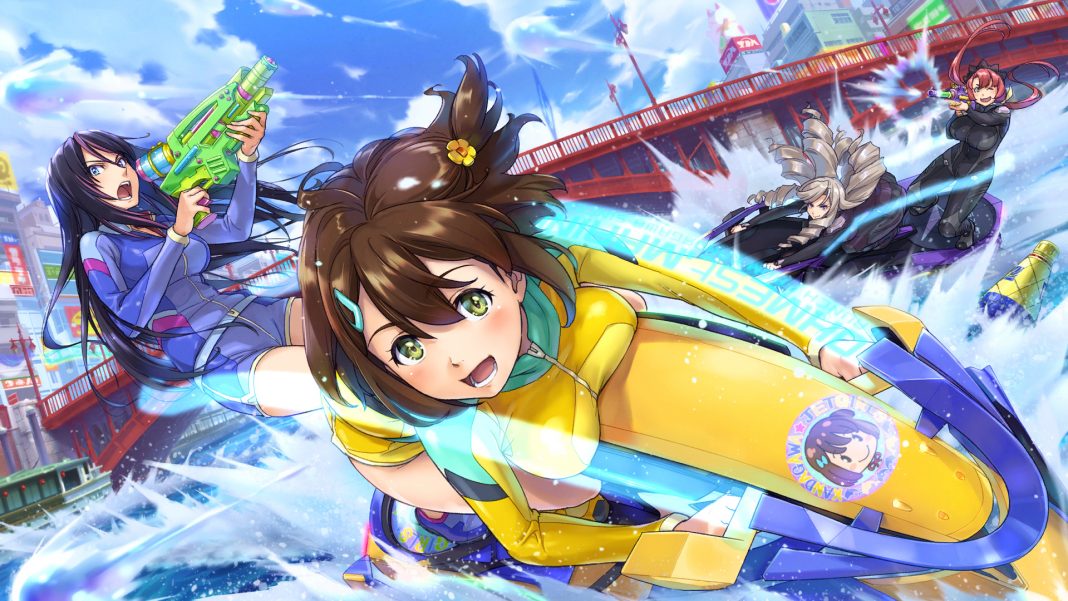 Kandagawa Jet Girls was originally released in Japan only on PS4. As with most localisations from Xseed Games, a PC version was added for the West. The cross-media franchise including an anime and a game of the same name is finally here in the West bringing jet ski racing action from the creator of Senran Kagura. I’ve been playing it on both PS4 Pro and PC over the last week for review and it is a surprisingly fun game with some caveats.

The premise is that Rin Namiki, whose mother is a legendary jet racer, has moved from the countryside to Tokyo to fulfill her dreams of being a jet skier. She runs into Misa Aoi and aims to form the Kandagawa Jet Girls club a part of Asakusa Girls’ Municipal High School. All the other girls from different schools in the game have their own motivations for becoming a jet racer and their own backstories leading up to them all competing in the Kandagawa cup. The story mode here is split up into multiple dozens of chapters that are spread across different schools featuring different playable characters.

Having watched most of the anime before playing, the game definitely struggles with explaining  the plot initially while the anime does a much better job of explaining certain character motivations. For the game, the story mode feels a lot like a fighting game story mode where you have a set of story moments that end up in someone being challenged. Instead of throwing down like it was a fighting game, you are challenged to or challenge someone to a jet ski race. Backed up by voice acting aplenty, the story mode has good course variety but feels repetitive when it comes to structure. It doesn’t help matters that the overall narrative seems to skimp on details, requiring you to watch the anime to understand some elements better.

Races in Kandagawa Jet Girls take place over a portion of a larger course. Each course has a few race path options and this adds variety and more replay value to the courses included. Your aim is not just to try and go as fast as you can but also to avoid obstacles, deal with opponents with your various guns and other weapons, perform tricks, and ensure you don’t collide into walls or opponents. Drifting also plays an important part because it lets you boost but the controls will take some time to get used to. Thankfully, there’s a very good tutorial available in-game that you can play at anytime. For boosting, you work managing the EPD gauge which will also let you perform a special character-specific technique once the gauge is filled up.

During a race,  you control one of two characters on your jet ski at a time. You’re either controlling the driver with your partner relegated to a few shortcut buttons. You can switch to your partner who shoots when you need to fire at any opponents as well. At this point, the driver is taken over by the AI. As you make your way across the stage, you will hit item boxes that give you one of many special weapons that shoot water. Dealing enough damage will cause opponents to break and slow down when the shield they have is depleted. I was initially very disappointed with the pace of the races which felt slow but given the shooting mechanics and focus on boosting, it makes sense. As you upgrade your jet ski, it feels much better during races as well with better handling and speed.

The actual racing itself has some issues. Jet ski racing games like Wave Race 64 and Riptide GP2 nail the feel of jet skis with landing on water and speed. The impact of the jet ski in Kandagawa Jet Girls is lacking overall. When you try and drift, you can end up oversteering very quickly which is annoying. The last issue with races is that once you are well in the lead, you don’t actually get to do anything with weapons you pickup and only focus on building up boost. This makes multi-lap races quite boring after the initial action and tension is done.

Barring the story mode, Kandagawa Jet Girls has a free mode where you can race with your own options and a time trial as the core jet ski racing modes. You unlock more characters and jet skis among other customisation options with story mode progress so it is worth playing the story so you have more variety in these other modes.

Customisation plays a huge part in Kandagawa Jet Girls not only for the girls but also jet skis. Through currency earned in races and mini-games, you can buy costumes, hair variations, accessories, and more for girls and tweak your jet ski a lot. This includes decals, skins, cosmetic trails for drifting, and even the core stats. This currency can also be used to buy in-game gallery items, movies, and music. More items are unlocked through story progression.

While currency can be earned through races, the best way to earn currency is in the mini-games. There are four mini-games in Kandagawa Jet Girls that are called Extracurriculars. Mopping has you running in an endless runner-like path as you avoid obstacles and try to focus on cleaning with your mop for combos. Aerials has you taking on a course to chain tricks and keep your combo up. Treadmill Run has you balancing the character’s running speed to collect hearts that shoot up from the bottom of the screen.

While these three mini-games are fun, the payout in currency is negligible compared to Jet Machine Cleaning. Jet Machine Cleaning feels like a rhythm game paired back. Your aim is to input four buttons in the correct order quickly to chain combos. If you are good at rhythm games, you will likely not even need the other mini-games to earn currency to unlock everything in Kandagawa Jet Girls.

For multiplayer, Kandagawa Jet Girls only includes online multiplayer. There is no local multiplayer mode on the same console if you want to play in split-screen. For online, I haven’t been able to check how the netcode holds up pre-release because I haven’t found a single game or room while checking regularly. The online mode lets you join a room or create a room for casual play or join a ranked race with your character setup. When you create a room, you can set the course, route, lap count, room theme, and set whether the room will be private or not. Once you create a room, you can wait for people to join or invite someone from your friends list.

Visually, Kandagawa Jet Girls is a mixed bag. Character designs are styled well and the jet skis look excellent. The overall game aesthetic is good but the courses are very inconsistent. They look better at dusk and in the night with the daytime highlighting how barebones a lot of the visuals are in Kandagawa Jet Girls. There is a lot of variety across courses and characters but the visuals could’ve been better. Performance and load times on the other hand are bad. On PS4 Pro, there is a lot of screen tearing during most races and a distinct lack of good anti-aliasing. Performance is also very erratic with jet ski gameplay rarely feeling as smooth as it should. Loading screens are frequent and long as well.

Kandagawa Jet Girls might have my favourite soundtrack from any game by Honey Parade Games. It is full of catchy music that revs up for the final lap in a race and character-specific themes are also excellent. It features only Japanese voice acting but thankfully there are subtitles for almost everything including in-game callouts and shoutouts from both your characters and rivals in a race.

Given that the game has been out in Japan for a few months, I’m not hopeful for the performance issues and load times to be fixed on PS4. Barring those technical issues, not being able to check mission requirements in a chapter to earn bonus rewards is a baffling omission. You can only see them before and at the end of a race or chapter.

Overall, Kandagawa Jet Girls has a lot of good ideas that aren’t properly realised. It isn’t as good as Senran Kagura Peach Beach Splash mechanically but Kandagawa Jet Girls is greater than the sum of its parts. On their own, the jet ski gameplay could’ve been better and the shooting mechanics don’t feel well utilised. Together, these make for a very interesting race across different laps as you work on controlling boosts, collecting weapons, avoiding damage, and using said weapons on opponents. If you’re a fan of the anime or want to try a unique jet skiing experience, Kandagawa Jet Girls is worth getting. Just don’t expect this to be a mechanically amazing jet ski racing game.