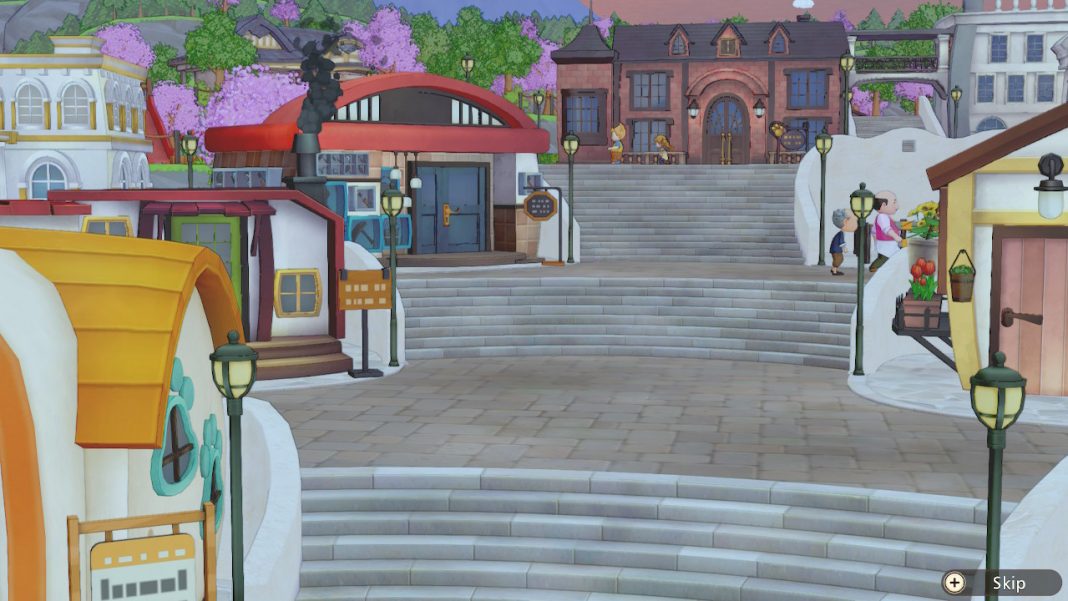 For Story of Seasons: Pioneers of Olive Town, Marvelous has brought a lot of new features or features from prior games and the end result is mostly great with a few annoyances. In my preview, I mentioned how I couldn’t wait to play more and my view on a lot of the design decisions have improved the more I played. After more than tripling that playtime, there are still some annoyances that I hope get addressed but I’ll get to those in a bit.

Right from the get go, Story of Seasons: Pioneers of Olive Town features a ton of customisation options for various aspects of your character. This is much more than I was expecting but considering how close the camera is to you in some cut-scenes, this really added to the overall immersion of the game for me and the character interactions in cut-scenes during events and festivals in Story of Seasons: Pioneers of Olive Town are really great.

If you’ve never played a Story of Seasons game before, they usually include a few common aspects like taking over a farm, build it up, interacting with people from a village or town, taking care of animals, partaking in festivals, gathering materials to improve tools, and some form of mystery that plays out through the narrative. There’s also the ability to marry potential bachelors and bachelorettes. Story of Seasons: Pioneers of Olive Town builds on these common themes but also changes how important some things are given the focus on building up Olive Town. The Sprite interactions and features are also really well done and I won’t get into them for spoiler reasons because where you unlock them and what you can do once you have unlocked them is worth discovering on your own.

The biggest change compared to prior games for me is how unimportant farming and growing crops are in Story of Seasons: Pioneers of Olive Town. You can do a ton and the farm you have access to is massive, but it isn’t as important as mining which is what helps you upgrade and progress to better equipment and more areas. This probably is what led to the lack of precision for tools on the farm. In prior games and in many life simulators that have farming, you can hold a button to move in one direction while locking your aim to water, dig, and more. There’s no provision for that here and the hitboxes or targetting is very finicky in Story of Seasons: Pioneers of Olive Town. I had this problem on Nintendo Switch Lite and when playing docked with a Nintendo Switch Pro Controller. Once you upgrade your tools, this becomes less of a concern given the area of effect possibilities but this is definitely a step back.

As with prior games, managing your time and stamina remains key to making the most of your time in Olive Town. The clock is almost always ticking and you will slowly start planning out your days when you wake up and get used to the NPC schedules for their own stores and more. What I love about Story of Seasons: Pioneers of Olive Town compared to other games in the genre is how much freedom you still have with how you want to spend your day. There are so many things to do that you will almost always run out of stamina before you run out of time. This is much better than not being able to do what you want to because of the time.

You could spend one day focussing on fishing and cooking after caring for your livestock and spend the next few days just mining and feeding your makers or working on donating items to the museum and talking to people. Makers are a huge focus of the game for better or for worse. This almost makes  Story of Seasons: Pioneers of Olive Town feel like a game designed around crafting and automating rather than farming. Makers are furnace-like things that let you feed in different kinds of raw materials or ingredients for processing. You slowly unlock more makers and can even get upgraded ones later (this takes a bit too long) that let you process more than one of a single item at a time.

When it comes to additions and changes to how things usually are in games like this, I adore the progression system in Story of Seasons: Pioneers of Olive Town. While you obviously work towards upgrading tools, you also upgrade skills. Upgrading skills nets you new crafting recipes, rewards, and more. The in-game title system (achievements) constantly rewards you and indirectly pushes you to keep improving to earn more recipes and skills. Fishing in Story of Seasons: Pioneers of Olive Town is also very different with its own mini-game that is an absolute joy. I made sure to upgrade the fishing rod first each time just so I could spend more time and catch a ton of fish for cooking and to make money.

The cast of NPCs in Olive Town is mostly great and the localisation is excellent with almost everyone having their own flavour during interactions. There’s also quite a bit of dialogue so you don’t really need to worry about it becoming like Animal Crossing: New Horizons with all the repeated dialogue there and there’s even more of it coming in post-launch updates as confirmed by the developer.

Visually, Story of Seasons: Pioneers of Olive Town does a lot right but it feels a bit unpolished. Some aspects of the game like an upgraded farm, environments, and characters look great but animations are a bit stiff. There are some neat little touches like leaves blowing in the wind and the seasonal changes alongside different weather that are well implemented here. The issue with visuals is in the popin. Once you have a lot on your farm, it takes a bit of time to load as you run past different areas. This is more noticeable if you move the camera while running or on your horse early on. I definitely appreciate the touchscreen support for the interface when played handheld.

In its current state (version 1.03), Story of Seasons: Pioneers of Olive Town’s biggest problems are the performance and some balance around the makers. The performance in more busy farms is still really bad with constant stuttering and sometimes even freezing for a second. I’ve had this happen both docked and handheld across two consoles. Even in the relatively empty town roads, the performance isn’t perfect.

While the load times were pretty bad before, the 1.03 update has drastically improved them for when you just go in and out of shops and meet other people. The load times are only noticeably long when you go back and forth between your farm and Olive Town. The lack of any sort of rumble is also very disappointing for when you use tools or go fishing.

Story of Seasons: Pioneers of Olive Town has a great soundtrack full of catchy tunes during the different times of the day in each season and in NPC houses. This is complemented by some lovely voice acting albeit in a limited sense through the game. I definitely think this is one of the stronger Story of Seasons soundtracks so far. Character and event themes are also great.

Overall, I’ve enjoyed Story of Seasons: Pioneers of Olive Town quite a bit and keep playing it daily but the performance issues really sour the overall experience. In its current state, there’s a lot to love about Story of Seasons: Pioneers of Olive Town but also some things that are disappointing. Given the sheer amount of additions and content included here, it feels like a few more months of time could’ve helped the game be a much better experience. Hopefully these can be addressed in post-launch patches since there is a lot of DLC planned for the game. Thankfully, the English release is in a much better state day one after the patch than the Japanese release was last month.