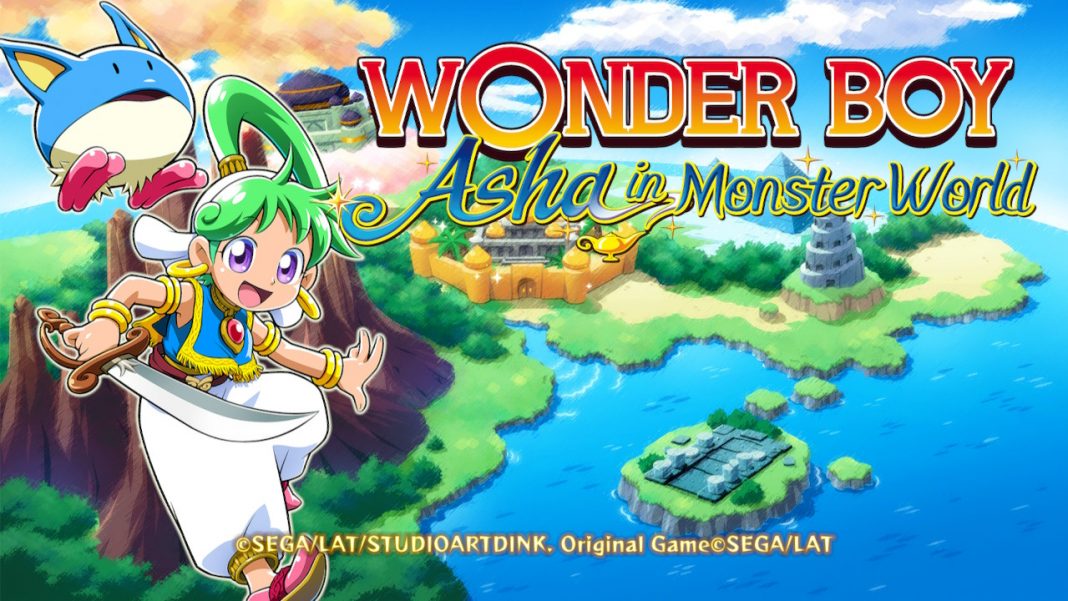 Over the years, it feels like many developers are revisiting games from decades ago to make them more palatable to a modern audience through remakes, remasters, or reimaginings. Sega in particular has been great with how it lets other studios license out and officially work on its older brands. Releases like Dotemu’s Wonderboy: The Dragon’s Trap, a remake of Wonder Boy III: The Dragon’s Trap by Westone, FDG Entertainment and Game Atelier’s Monster Boy and the Cursed Kingdom are great examples of this alongside Streets of Rage 4. Action adventure platformer Monster World IV by Westone from back in 1994 is the newest Sega published release game to get a remake and it has finally been released in the form of Wonder Boy Asha in Monster World by Artdink, Monkey Craft, and ININ Games.

Wonder Boy Asha in Monster World’s story is the same as the original game with Asha being tasked to free evil spirits alongside her companion Pepelogoo who helps with various puzzles and secrets. The story itself isn’t the real draw here but the Japanese voice acting is a nice addition on that front. The major changes and additions to Wonder Boy Asha in Monster World are with the gameplay, visual, and music.

The biggest change when it comes to the actual gameplay is the ability to save anywhere which is a welcome addition especially for harder boss battles or one specific level later on. There are also many more save slots versus the original. Barring that, Wonder Boy Asha in Monster World has more life drops spread across the game and the ability to collect life drops you may have missed in earlier areas. In terms of quality of life improvements, coins dropped by enemies are automatically picked up versus you having to manually collect them in the original.

When older games are remade or remastered for modern platforms, accessibility is important. Being able to save anywhere as mentioned before, is the best new feature but having an easy mode will help this reach a larger audience. The tips menu is another nice addition for newcomers with how it explains various aspects of the game.

On Nintendo Switch, Wonder Boy Asha in Monster World has good HD Rumble support for certain interactions. Barring that, it doesn’t use the Nintendo Switch hardware with anything special. There isn’t any touchscreen support.

When Wonder Boy Asha in Monster World was originally revealed, a lot of people including myself were concerned about the performance issues in the footage. I was hoping the final release on Nintendo Switch would be great because I own both Wonder Boy and Monster Boy on Nintendo Switch, and generally enjoy playing platformers on the go. Sadly, the game doesn’t feel smooth throughout. Expect a lot of frame pacing issues sadly The load times are quick but there are instances of slowdown like when you save. Hopefully future updates can address these issues.

Alongside the redone visuals moving from 2D to 3D, the music has gotten an overhaul as well and there is also voice acting featuring Fairouz Ai (How Heavy Are the Dumbbells You Lift?) as all the voices in this remake. The voice acting is mostly good and the music does a good job of reimagining the older songs in a modern style while still remaining instantly recognizable to those who played the original.

If you buy Wonder Boy Asha in Monster World at retail through ININ Games on PS4 or Nintendo Switch, the original Monster World IV is included as a bonus. This version of Monster World IV features visual options for scaling and filters. It is a nice addition and incentive to get people to buy the retail release but a bit disappointing that it isn’t sold separately on the eShop or the PS Store for those who prefer going digital. If you are interested in playing Wonder Boy Asha in Monster World, I’d recommend going the physical route just to have this bonus because it is great to have the option to play the original alongside a remake.

Wonder Boy Asha in Monster World feels like a missed opportunity in some ways. It does a good job of modernizing the visuals and feel of Monster Boy IV for modern hardware but retains too many of the original’s quirks to be palatable to everyone. While it is definitely more accessible, it feels a bit too true to the original when this was a great chance to fix the issues the original had rather than be a fresh coat of paint on the structure of the original. The performance issues on Nintendo Switch definitely don’t help here.