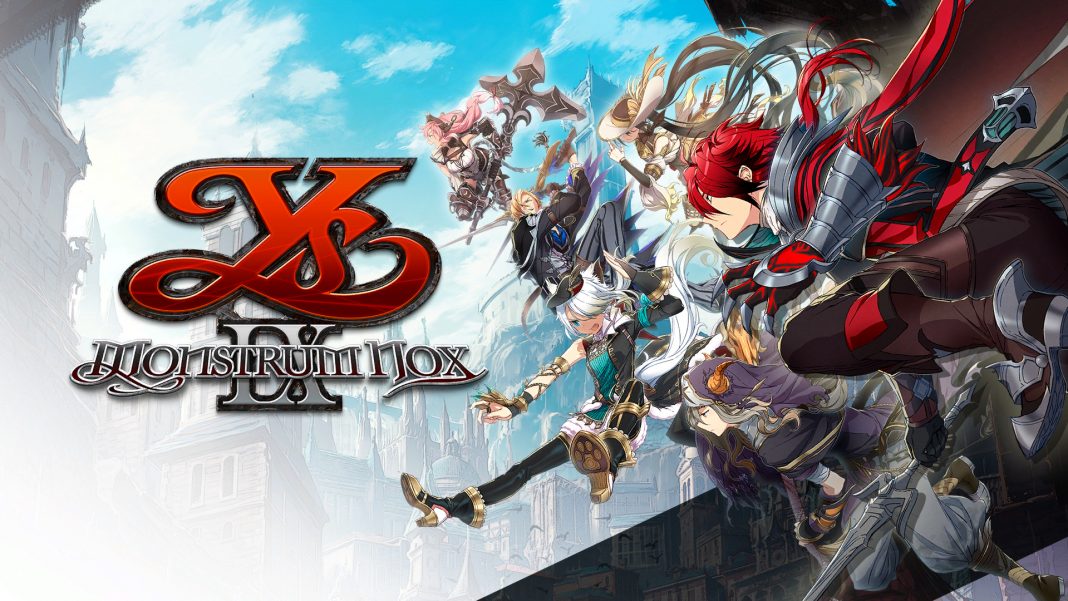 Back in 2017, I was blown away by how good Ys VIII: Lacrimosa of Dana from Nihon Falcom was on not just PS4 but also PS Vita. The PS Vita version in particular is a great technical showcase for the system given the scope of Ys VIII and how well it ran on Sony’s handheld. Following those releases, I’ve now played Ys VIII across every single system and consider it one of my favourite games of all time. I liked it enough to pre-order the original Japanese release of Ys IX: Monstrum Nox in 2019 and had played it over the months following the release. Having now played the English release of Ys IX: Monstrum Nox for review as well, I’ve come to appreciate Falcom’s newest mainline entry in the long-running Ys series even more but there are still some problems that haven’t been addressed.

Coming from Ys VIII: Lacrimosa of Dana to Ys IX: Monstrum Nox was interesting not just for the narrative but also the structure. Instead of you being stuck on an open island away from civilization, you find yourself stuck in a prison city as Adol Christin once again. There are even casual references to some things in Ys VIII that were a nice touch. Ys IX: Monstrum Nox takes place in the prison city of Balduq where Adol finds himself cursed. This gives him the ability to turn into a ‘Monstrum’. A Monstrum has supernatural abilities and takes on various monsters across dimensions. As a Monstrum, Adol has new powers that let him zip around the city with a red grappling hook like ability.

The story in Ys IX: Monstrum Nox is structured with chapters focussing on each of the Monstrum with story beats, dungeons, and more all focussed around the specific Monstrum and their abilities. As you progress in Ys IX: Monstrum Nox and new party members join you, everyone gains said party member’s ability as a Monstrum drastically increasing your repertoire in combat and exploration. While the latter part of the story doesn’t really add much to traversal with some abilities that feel like wasted potential, Falcom’s ambition in Ys IX: Monstrum Nox is massive and I definitely respect the end result and have enjoyed the time I’ve put into the game for the second time.

Initially, the prison city of Balduq is very limited in places you can explore thanks to barriers and your curse. Your aim is building up Nox you earn through helping people, doing side quests, main story quests, defeating enemies that spawn through black pillars across Balduq, and more. Once you have enough Nox accumulated, a miasma vortex appears and you need to enter it to defeat the various enemy waves within. This slowly lets you open up the areas in the city you can explore. The city is huge and there are a ton of hidden items and chests that encourage you to use the various skills you have like zipping around, climbing walls, and gliding.

Without getting into any spoilers, there are some late portions of the game that felt tacked on mechanically but fit in when it comes to the narrative. These segments were nowhere as much fun as the Dana segments in Ys VIII. Barring those, the side content and quests available to you in Ys IX: Monstrum Nox are really good assuming you enjoyed those things in Ys VIII. In a lot of ways Ys IX: Monstrum Nox feels like it was built up on the base laid by Ys VIII but with ambition that was never fully realised thanks to what feels like a rushed release with the lack of refinement across some areas.

Visually, Ys IX: Monstrum Nox is a mixed bag. It does a lot of things better than Ys VIII and is a lot more ambitious overall in scope, but has technical issues on PS4 Pro. Unlike Ys VIII that targeted 4K on PS4 Pro, Ys IX: Monstrum Nox seems to be at 1080p with a lot of the usual post-processing effects missing. There’s barely any anti-aliasing so expect a lot of jagged artifacts. The draw distance in larger areas outside combat is also pretty bad. Given the new gameplay mechanics and traversal options, Falcom clearly didn’t have enough time to polish up the visuals and the first Ys game built for PS4 feels a bit lacking visually. It doesn’t help that the majority of the first half or so sees you exploring rather bland looking areas and dungeons. Things improve considerably later on though. One aspect of the visuals I liked a lot is the character and Monstrum designs.

When it comes to performance, some of the non-combat portions of Ys IX: Monstrum Nox on PS4 Pro run nearly as bad as Ys VIII does on Nintendo Switch. While the performance issues during combat sequences weren’t bad, it is still disappointing that most of these issues haven’t been addressed in time following the original Japanese release back in 2019. Thankfully, the rest of the game has improved considerably compared to its poor state when it launched in Japan. The performance issues will likely not be there when played on PS5 through backward compatibility but Ys IX: Monstrum Nox is a noticeable step down from Ys VIII which rarely dropped below 60fps. Even some of the in-engine cut-scenes have performance problems.

Ys IX: Monstrum Nox includes dual audio support and I enjoyed my time with the English voice acting since I had already experienced the Japanese voice acting while playing the Japanese version of the game back in 2019. NIS America did a great job with most characters and the casting here. Just like how the game itself feels a bit inconsistent, the soundtrack follows a similar path. Ys IX: Monstrum Nox has some of my favourite Falcom songs and some excellent music overall but it also has some less than stellar songs. The highlights are definitely Cloaca Maxima, Monstrum Spectrum, Desert After Tears, Welcome to Chaos, and Crossing A/A. Don’t get me wrong, this soundtrack is well above most games but for a Falcom soundtrack, it is a bit disappointing compared to the near flawless soundtrack other Ys games like VIII and The Oath in Felghana have.

My biggest complaints in Ys IX: Monstrum Nox barring the visual and performance issues are the pacing in the opening few chapters. They are too slow for what I’d like in an Ys game. I don’t mind the increased story and character focus but the pacing definitely needs work. Maybe if Ys IX: Monstrum Nox gets an expanded release on PS5 like Ys VIII did for PS4, we’d have a much more consistent game that would be as good as it aims to be rather than feeling unpolished.

Overall, I’ve enjoyed my time with Ys IX: Monstrum Nox once again and it is definitely worth playing for fans of modern Ys games. Given the references it makes to earlier games and its overall lack of polish in some areas, I don’t think it is the best Ys game to play as a newcomer. That remains Ys VIII: Lacrimosa of Dana or Ys: The Oath in Felghana depending on whether you want to get into the games through a modern or older entry. The gameplay and traversal additions and improvements in Ys IX: Monstrum Nox are definitely the real draw here and they make it a ton of fun to play overall. I wish Falcom had spent a bit more optimising the game technically though. Ys IX: Monstrum Nox is one of Falcom’s most ambitious games ever but that ambition needed a bit more time to be fully realised. Despite all my problems with Ys IX: Monstrum Nox, it is still an excellent action RPG and one that most Ys fans will adore.