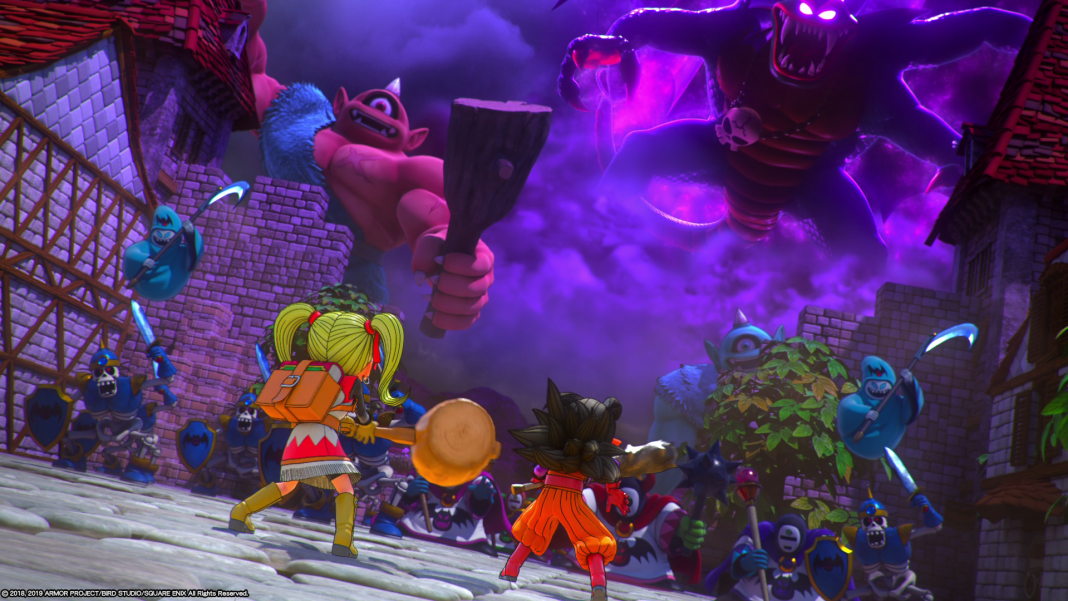 Both platforms have the same demo contents and in both cases, you can’t transfer progress to the full game. There’s a brief tutorial involving a few missions for NPCs on a ship before you reach a more open island where you get to explore a bit and do a decently long mission that introduces you to the final NPC of the demo. This is where there is a very abrupt halt to your progress at which point you are told to buy the game in the demo by an NPC.

I’ve always liked how the spin-off Dragon Quest games try and tie in the lore and just be as faithful to the overarching Dragon Quest universe and lore. The demo begins with you customising your character before getting thrown into the story. While customisation is appreciated, I was really hoping they would have offered more than just basic colour customisation options for hair and eyes. The demo assumes no prior knowledge of either Dragon Quest or Dragon Quest Builders which is a very good thing.

You wake on a ship and have a few basic quests to get you up to speed with the controls and core mechanics. It is fantastic seeing weapons have their own dedicated slot with no durability like the first game. Movement is much better here with a dedicated sprint button that uses your stamina that fills up on its own. One major addition is first person mode that is great. Many people coming into Dragon Quest Builders have likely played Minecraft and this will help transition into Builders better.

Dragon Quest Builders 2 looks fantastic on PS4 with high-quality shadows and textures across the board. The Nintendo Switch version has flickering shadows and in general feels a bit rougher. Thankfully the image quality overall is still good in both docked and handheld modes on Switch. The draw distance is higher on PS4 as well compared to Switch.

Dragon Quest Builders on PS4 ran at a mostly smooth 60fps but it had frame pacing issues when you held an item and moved. Thankfully that isn’t an issue in the demo here and the game has rock solid performance on PS4 Pro. On Switch, performance is erratic. It fluctuates both above and below 30fps and having a 30fps cap would’ve helped a lot with maintaining a more consistent experience. Looking up at the sky and moving brings up the framerate noticeably but it just drops when you are actually building or moving around in third person or in first person while looking ahead. This performance is a noticeable drop compared to the original Dragon Quest Builders almost across the board in both handheld and docked gameplay. These issues were prevalent in the original Japanese demo on the eShop in Japan from a few months ago and it is disappointing that they haven’t been addressed in the months leading up to the English release.

Dragon Quest Builders 2 PS4 vs Nintendo Switch what to buy

There are multiple factors at play for this decision including pricing and what you value more in a game. When it comes to pricing, since Square Enix is publishing the PS4 version in India, e-xpress Interactive is officially bringing the PS4 version to India at retail for Rs. 2,999. Nintendo is publishing and distributing the Nintendo Switch version and while it isn’t releasing here officially, it costs a lot more. The pricing and details are basically the same as those for Super Mario Maker 2 barring the local inflated price. If you only want to play Dragon Quest Builders 2 on the go, the Switch version is your only option and while it doesn’t feel as bad as docked, it isn’t amazing. If you want to play at home on TV, the PS4 version is a no brainer with its higher performance, better overall visuals, and much lower price point.

We will have a full review for the PS4 version closer to release.