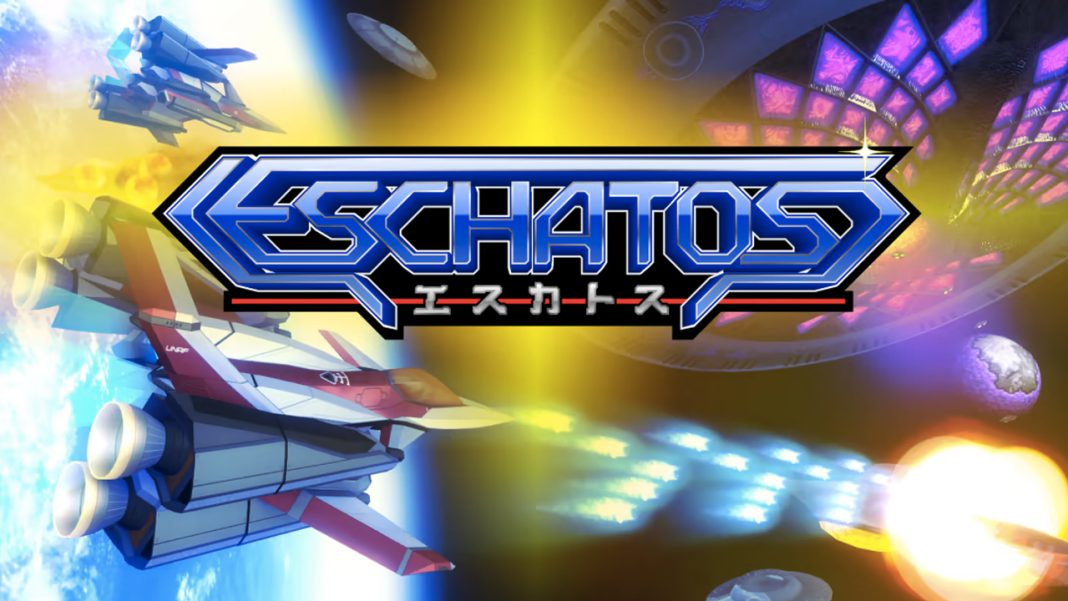 Last year was fantastic for the shoot ’em up genre on Nintendo Switch with multiple quality releases hitting the system including Mushihimesama, Raiden IV x Mikado Remix, and more. With each passing year since the system launched, it is evident that Nintendo Switch is the new console home for shoot ’em ups and things are looking even better in 2022 thanks to the arrival of Qute’s Eschatos on the eShop.

I’ve been playing Eschatos over the last few days and I’m very disappointed in myself for not getting it sooner when it hit Steam published by Degica Games. Having never played it before, Eschatos is already near the top of my favorite shoot ’em ups in recent years. The Nintendo Switch release is also almost perfect with only one annoyance that will affect some people, but not everyone.

If you’ve never played Eschatos, your aim is to repel the alien invasion coming for earth after having taken over the moon. You have your own advanced space fighter with multiple attack options to deal with the unique enemies and bosses across the game’s various stages that are split up into their own areas. These areas are elevated by the camera changing perspective often.

In Eschatos, you have access to a long-range front shot and a short-range wide shot in addition to a shield that can be used to absorb some attacks. This shield refills over time, but you need to make sure you don’t overuse it. Deciding when to use the front and wide shots adds a layer of strategy to the gameplay that will make or break your run. There are also different items you can pickup in addition to being able to modify your ship’s speed. It is definitely worth playing to just learn the mechanics and flow at the start.

Barring the original game mode, Eschatos also has an advanced mode where your firepower level will depend on items collected. In this mode, the front shot power and number of shots increases with the wide shot seeing shorter range and a wider angle with power-ups. The shield’s maximum level will reduce on power-up. This mode, as the name suggests, is for advanced players who already know the basics and have played through the original mode. The Time Attack mode has you trying to complete all the stages within the time limit. This limit can increase if you collect the one ups or depending on the bonus you get after clearing stages.

Visually, Eschatos didn’t look special initially. After just a little bit of playing, I was sold on the aesthetic and the perspective changing camera that drastically affected how I approach stages and enemies. It has a lot of great particle effects and runs smooth for the most part. The only area where I had any major performance issues was Tate Mode. Yousuke Yasui’s soundtrack is brilliant as well. You can either play with the original, remaster, or arranged soundtrack in the Switch version of Eschatos from the start.

On Nintendo Switch, Eschatos offers the ability to play in Tate Mode (left or right) and flip the screen upside down for orientation. You can also adjust the overscan and both X and Y positions of the display. Barring those options, you can toggle one of many wallpapers or disable the wallpaper. Beyond that, there is no touchscreen support for the interface at all.

This Switch release of Eschatos also includes Judgement Silversword Rebirth Edition and Cardinal Sins Recycle Edition as bonus games. These are both excellent shoot ’em ups in their own right with gorgeous visuals. It is wild to me after playing it, that Judgement Silversword was originally designed for a handheld (WonderSwan Color). Both of these were paid DLC for the PC version of Eschatos and they are included in the base release on Switch. It is worth noting that the cost of buying the game and DLC on Steam is lower than grabbing this Switch version.

My biggest issue with Eschatos in its current state is the performance during Tate Mode. There are noticeable performance issues when the action on screen gets hectic that aren’t present when played normally. This is something that will affect anyone playing with a rotated display. I ended up sticking to just playing normally and not using my Switch with the tabletop stand I use for Tate Mode when playing Eschatos. Hopefully this can be resolved in potential future updates. There are also a few localization issues in the manual right now that might confuse those who try to understand some mechanics by reading it over playing the game directly.

Despite already discovering so many amazing shoot ’em ups and franchises in the genre that I missed initially thanks to Nintendo Switch, PS4, and PC releases, I’m disappointed that I didn’t check out Eschatos sooner. Thankfully, this amazing Switch release has more than made up for that with its sublime soundtrack, great gameplay, and lovely visuals. It is one of the best shoot ’em ups on Switch and one I recommend to any fan of the genre or a newcomer looking for an accessible release with a lot of depth. I hope we get a physical release of Eschatos in the near future because I need to own a copy for my shelf. Even with the higher asking price than the PC version, Eschatos is absolutely essential.