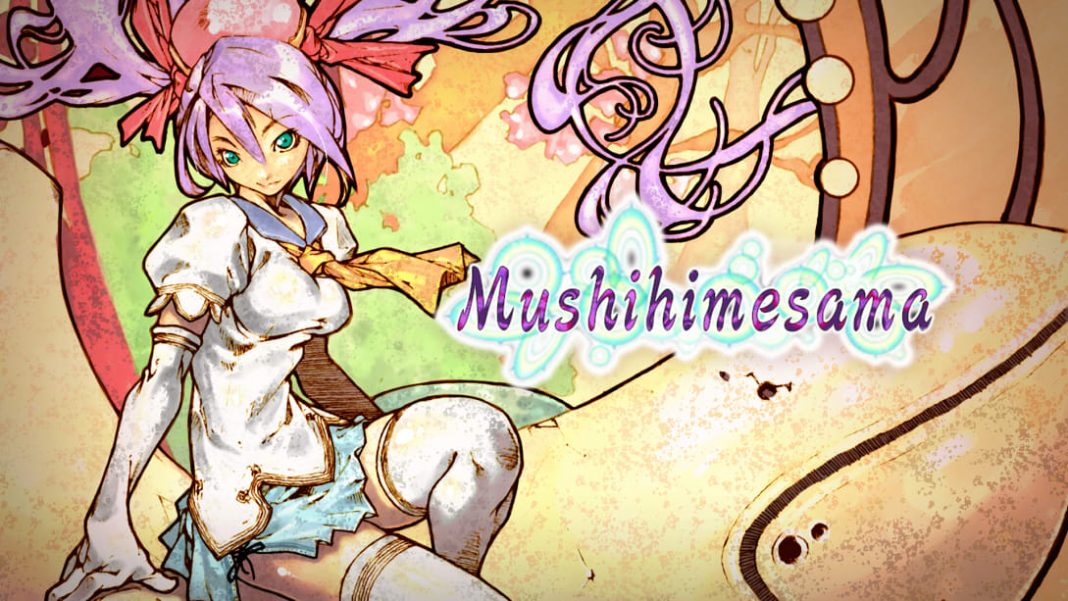 Despite a mostly lacklustre E3 outside of a few announcements including Nintendo’s own games, Nintendo’s E3 Direct had a lot of games I’m interested in checking out and one that almost went unnoticed because it was only shown in the Japanese Nintendo Direct. Live Wire announced a trio of Cave shoot ’em ups for Nintendo Switch this year beginning with Mushihimesama that was revealed and released on June 15 worldwide. Mushihimesama is a vertical scrolling bullet hell shoot ’em up that debuted in arcades in Japan before seeing Japan-only Xbox 360 and PS2 releases. It finally got an official English release on iOS and eventually Steam but Cave’s classic has now arrived on Nintendo Switch in an excellent conversion.

If you’ve never played Mushihimesama before, it is a shoot ’em up with an insect theme set in various fantasy and forest-like environments. The enemies are all kinds of beetles, butterflies, and more insect-like things with different bullet and movement patterns. Once you choose a start shot type, the game begins and you balance shooting and moving at different speeds while collecting different power ups and avoiding the swarms of enemies and bullet patterns on the screen until you reach the boss of the stage. I’ve been playing loads of shoot ’em ups on Nintendo Switch through collections and individual releases but Mushihimesama on Nintendo Switch is easily one of the most polished experiences you can have in the genre and the responsive controls, accessibility options, and loads of game modes make it essential for anyone looking at dipping their toes into bullet hell games.

Mushihimesama on Nintendo Switch includes Normal (the arcade experience), Arrange (different scoring and changes), version 1.5 (sold as DLC on PC) which is a remixed mode known as Matsuri mode with various options for how you start in terms of power. These modes have their own difficulty and training options. I’d definitely recommend starting out on Original if you’re new to the genre and working up. The Maniac option is definitely a sight to behold especially when played in Tate mode. The training mode lets you pick any stage, toggle settings like Max Power Mode (depending on the game mode chosen), shot type, in-game mode, and more. There’s a lot for you to play around with here if you’d like to just explore how much Mushihimesama offers across its versions and game modes.

A lot of older arcade game ports to Nintendo Switch arrive with a slew of visual options to allow players to tweak the experience. Mushihimesama on Nintendo Switch has a smoothing option (on by default) which I turned off immediately and it has various zoom and position options for the gameplay. You can even independently adjust the X and Y axis while zooming. There are multiple background options and an auto option to change the background after a fixed interval which you can adjust. Barring the in-game (per game mode) screen options, you can even adjust the general aspect ratio and orientation. This is where you can get into Tate mode and tweak a few display options for the HUD.

Having played Mushihimesama on Nintendo Switch and Nintendo Switch Lite across all modes, the performance is great. The few slowdowns I noticed line up with those in the PC version and are likely intentional given the bullet patterns and sheer chaos on the screen to make things a bit more manageable. Barring that, it loads relatively quickly when you want to switch in and out of game modes or versions, and runs as it should. Live Wire’s conversion bringing Mushihimesama to Nintendo Switch delivered when it comes to performance.

Cave games have great music but Mushihimesama’s soundtrack is brilliant. The arrange mode has its own soundtrack by members of Basiscape (13 Sentinels). Overall, the soundtracks included here and songs fit the levels perfectly and complement the absolutely overwhelming visuals on display. While the added soundtrack options, including the ability to change the soundtrack per stage, are nice, the original soundtrack is by far my favourite so far. Mushihimesama on Nintendo Switch has one of the best shoot ’em up soundtracks ever and you should listen to it even if you don’t want to play the game.

When it comes to Nintendo Switch-specific features, Mushihimesama doesn’t include touchscreen support but it does support Tate mode as mentioned earlier. You can also play alongside a friend on the same console with an individual Joy-Con each and it works perfectly with drop-in support. One thing I would’ve liked is a proper museum-like gallery that includes concept artwork and promotional material used for the game over the years. It would’ve been a nice addition for those who already own prior versions of the game.

The only real downside to this release is in how it doesn’t explain things to newcomers. There isn’t any guide to what to expect in each mode and how they differ. If you are considering getting Mushihimesama on Nintendo Switch, some reading up online will definitely help out. Hopefully the developers can patch the game with a page just explaining the differences between modes for absolute newcomers to the genre and to Cave games. As of this writing, the leaderboards aren’t active yet so I can’t test that aspect of the game out. Hopefully the patch to enable them arrives soon.

Over the years, the Nintendo Switch has become the new home to shoot ’em ups for sure. While some have subpar conversions like R-Type Final 2, Mushihimesama has arrived in a near perfect conversion and it will keep you busy for a long time. Not only is it a brilliant shoot ’em up that warrants a spot in any collection, but it is one of the best releases this year on Nintendo Switch. I only hope it does well enough to get a physical release. I’m very excited to check out Espgaluda II and DoDonPachi Resurrection when they both release later this year.