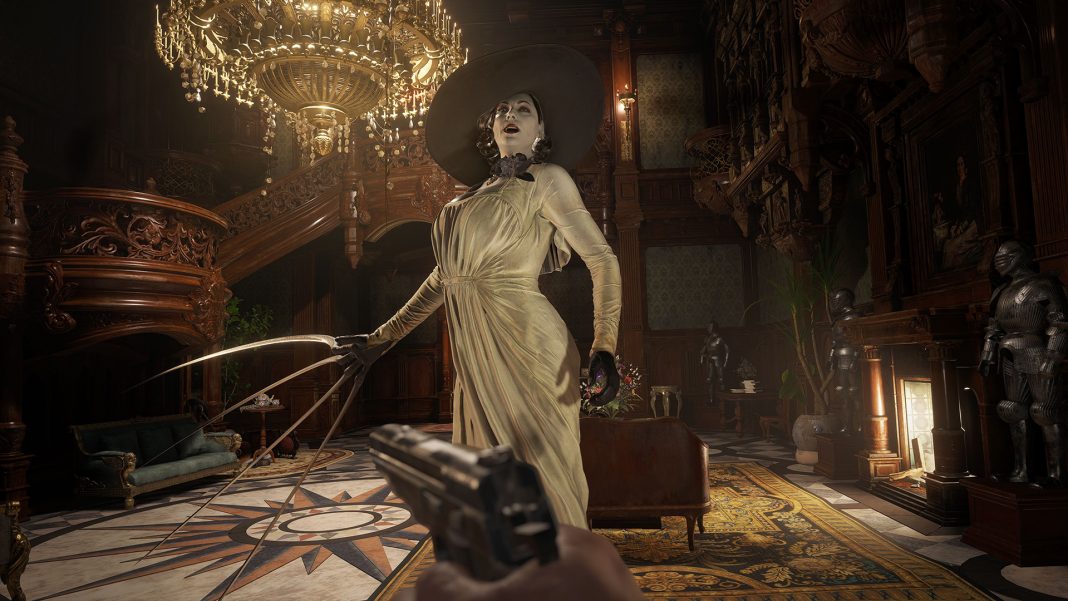 A lot of the settings give you a small preview through a specific in-game scene adjusting based on how you tweak the setting. In addition to that preview, Resident Evil Village also tells you what part of the experience the specific setting will change ranging from model quality to graphical effect quality and how much processing load is present at all times in addition the graphics memory being used.

The one weird omission is an FOV slider. Despite support for different aspect ratios and even ultrawide setups, Resident Evil Village doesn’t have a way to adjust the FOV in the options in its current state and this is important for many people in a first person game.

On a laptop with an AMD Ryzen 5-3550H processor (2.1GHz Base speed up to 3.7GHz), 16GB DDR4 RAM, and an Nvidia GeForce GTX 1650 4GB GPU and a 120hz display, I tested out Resident Evil Village across its Recommended, Prioritize Performance, Balanced, Prioritize Graphics, and Max preset options (without making any changes initially) at 1080p and also tweaked the settings to try and get things to my liking for a consistent 1080p and 60fps without sacrificing too much image quality and effects. It is worth noting that the presets and switching between them are only available from the title screen and not while in a loaded save.

I’d recommend starting with the Balanced preset and tweaking things to your liking from when you’re in a loaded save preferably while in an outdoor area. The PC version of Resident Evil Village lets you disable a lot of the cinematic effects for a cleaner image so make sure you spend some time with the options here because Resident Evil Village scales brilliantly (albeit not as well as Resident Evil 3 Remake on the low end) on PC. The render scale options and various lighting options even without taking ray tracing into consideration allow for a gorgeous experience even on a budget laptop like the on I used.

For control options, Resident Evil Village has full controller and keyboard and mouse gameplay support. There are four different controller presets for buttons with an option to change running from holding to toggling a button.

For keyboard and mouse controls, you can invert mouse buttons, invert the scroll wheel, and adjust key bindings (both primary and secondary) for various actions in and out of menus and the inventory.

If you use a DualShock 4 or DualSense controller, don’t expect native button prompts support. Just like Resident Evil 3 Remake, if you’d like to play with a PlayStation controller, you will likely have to wait for a mod for button prompts. You can swap between any controller and keyboard and mouse controls at any time though which is always good to have.

Overall, the control options are good but I was hoping to see Resident Evil Village finally allow for native button prompt support for more than just Xbox controllers.

Should you play Resident Evil Village on PC

Ever since Resident Evil 2 Remake, I’ve been checking out mainline Resident Evil releases on PC and the conversions are always excellent overall. Resident Evil Village continues this and while the release isn’t perfect, it scales well across lower end hardware and various post-processing options let you tweak things a lot more than on console.

Over the last few days, I’ve also been playing Resident Evil Village on Xbox One X and while the higher resolution option there is great, the performance mode drops the resolution to 1080p. I’ll have a full review of that in the near future but Resident Evil Village is excellent on PC and well worth it if you’ve been wondering about the PC version.

While the lack of a physical release might be a deterrent to a few, the lower asking price (albeit not in line with Valve’s regional pricing) compared to consoles, added control options, and scalability of the release makes Resident Evil Village on PC well worth your time.

Resident Evil Village releases on May 7 for PS5, PS4, Xbox Series X|S, Xbox One, and PC via Steam.