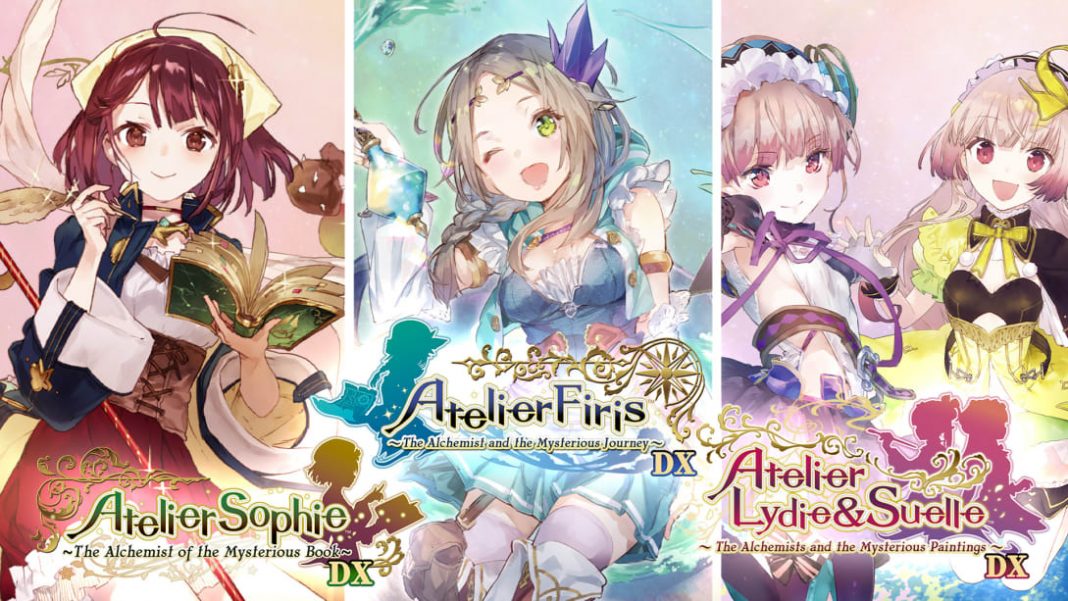 Over the last few years, Koei Tecmo and Gust have slowly been bringing more of the older PS3 and PS Vita Atelier games to modern systems including Nintendo Switch through DX or Deluxe releases. Having already played most of those through the PS Vita versions, I was glad to have new portable releases that didn’t have the massive technical issues from the PS Vita versions. Following the Atelier Dusk Trilogy Deluxe Pack and Atelier Arland Trilogy Deluxe Pack, Koei Tecmo surprised me with the announcement of the Atelier Mysterious Trilogy Deluxe Pack that includes Atelier Sophie: The Alchemist of the Mysterious Book DX, Atelier Firis: The Alchemist and the Mysterious Journey DX, and Atelier Lydie & Suelle: The Alchemists and the Mysterious Paintings DX with the first two making their debut on a Nintendo platform with the DX release.

When Koei Tecmo started properly bringing Gust games to Nintendo Switch alongside PlayStation and PC, I felt like we would only get newer games and the ship had sailed on getting the likes of Atelier Sophie, Blue Reflection, and the first Nights of Azure game that I enjoyed a lot. The Atelier Mysterious Trilogy Deluxe Pack announcement was definitely a welcome one because this brings the only Atelier games on PS4 and PC that weren’t on Nintendo Switch to the company’s hybrid system alongside Atelier Lydie & Suelle that was the first Atelier game on Nintendo Switch with a lot of technical issues when it launched back in 2018 in the West.

Atelier Sophie, the best entry point into the Atelier games before the Atelier Ryza games, is a great conversion here in its Atelier Sophie DX form. There are some slowdowns from the 30fps target when played handheld but I noticed almost no issues when playing it docked. Atelier Sophie’s original release targeted 60fps on PS4 and 30fps on PS Vita with the latter having a lot of slowdown issues so it was good to see the Nintendo Switch DX version of Atelier Sophie run much better. It also looks crisp when played docked and handheld with detailed character models and responsive menus. The environments are very simple and dated though just like on other platforms but the game itself has mostly aged well despite having originally released back in 2016 outside Japan.

Since Atelier Lydie & Suelle’s release, Gust has improved with each new release on Nintendo Switch and both Atelier Ryza games are excellent on Nintendo’s hybrid system. For the Atelier Mysterious Trilogy Deluxe Pack, I was very curious to see how Atelier Sophie and Atelier Firis were brought over, but I was hoping Gust made some improvements to Atelier Lydie & Suelle. Thankfully, they did and while it isn’t a huge upgrade, it definitely feels like the Nintendo Switch version is now closer to the PS4 version than the PS Vita version overall.

The major changes I noticed comparing the original Atelier Lydie & Suelle and the DX version are better foliage, improved performance, better shadows (albeit with pop in), and support for video recording. I did notice some dithering in the image both docked and handheld for Atelier Lydie & Suelle DX. This is similar to the Atelier Ryza Nintendo Switch versions. Comparing a few more scenes between both games has been interesting with some showing reflections for smaller objects removed in the new release (even on PS4) and the addition of shadows to locations that had no shadows previously improving the overall look. ONe thing that didn’t change is the fact that Atelier Lydie & Suelle only has Japanese voice acting while both Atelier Sophie DX and Atelier Firis DX include dual audio.

Barring how the games look and run, each of the DX releases includes a photo mode, a digital artbook app that includes music and art from the games (with no screenshot or video recording functionality), quality of life improvements during battles, and also a plethora of DLC (but not all DLC) from the original releases. Each game also includes additional content not available in the originals which adds to the value of these re-releases or new ports in the case of the first two games on Nintendo Switch.

The Atelier Mysterious Trilogy Deluxe Pack on Nintendo Switch is an excellent value package and the improvements to Atelier Lydie & Suelle definitely are welcome. If you’ve never played the games in this trilogy before, the Nintendo Switch versions are worth it. Even if you already played the original Atelier Lydie & Suelle, the new DX version included here has enough improvements and the inclusion of not just DLC but new content in all three games makes this essential for Atelier fans.