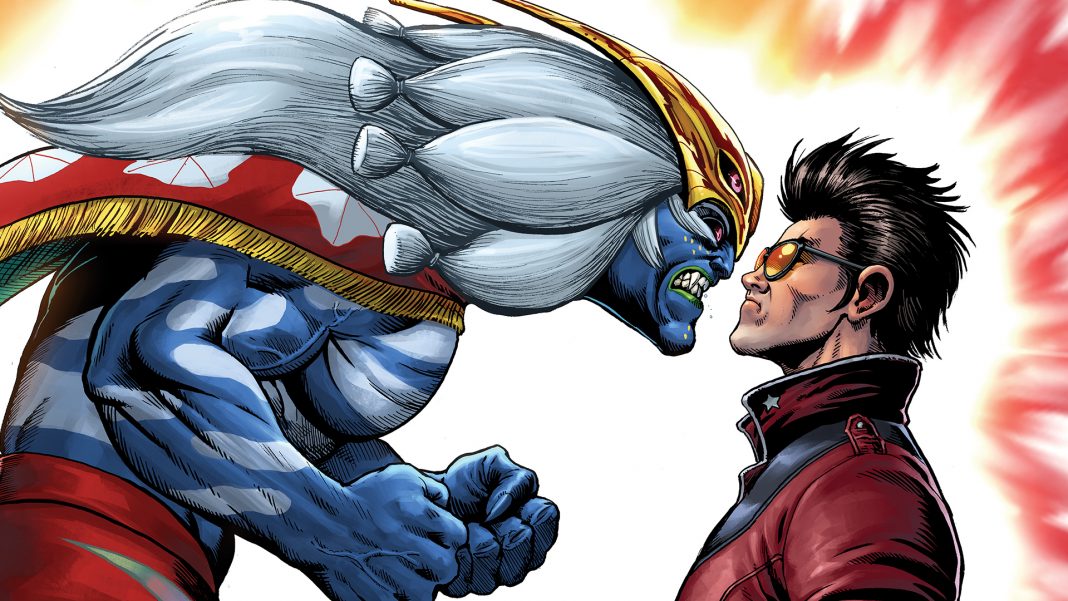 No More Heroes 3 from Grasshopper Manufacture debuted on Nintendo Switch last year, and it has now made its way to PS5, PS4, Xbox Series X|S, Xbox One, and PC platforms through Xseed Games and Marvelous. The newest entry in the long-running series is finally on Steam following the release of Travis Strikes Again and both No More Heroes and No More Heroes 2. When I played No More Heroes 3 on Switch, I called it a goddamn great game. Since reviewing it, I’ve replayed it a few times and recently beat it again for my PS5 and PC reviews. Even a year and multiple playthroughs later, I still love No More Heroes 3. For this No More Heroes 3 PC performance review, I’m going to cover the game on Steam Deck, the PC port features, the few issues I ran into, and more.

No More Heroes 3 has a launcher for the graphics options, but you can thankfully adjust these settings while in-game as well. I was afraid this might be like other games that lock you into some settings until you quit. No More Heroes 3’s display options let you adjust display mode (borderless, windowed, and fullscreen), resolution all the way down to 320×200 (I tested it at up to 1440p), frame rate (30fps, 60fps, 120fps, 144fps, and unlimited), and toggle v-sync.

The No More Heroes 3 graphics options only let you adjust the anti-aliasing (none, low, mid, and high) and shadows with the same options. You don’t get control on draw distance in general or textures here. There are also graphic presets you can use, but I opted to tweak the settings a bit to get it running at 60fps and look as good as possible on Steam Deck and 120fps on my laptop.

No More Heroes 3 has support for controllers as well as keyboard and mouse gameplay. The latter will be surprising given the prior releases on PC, but is a welcome addition. I had no issues control wise with my DualSense controller and also with the Steam Deck. No More Heroes 3 has correct button prompts as well when swapping between controllers with PlayStation button prompts supported.

If you have a controller plugged in, the game will not let you use mouse and keyboard controls. Once disconnected, you have full control including movement with mouse and keyboard with appropriate button prompts. This is a big step up from the prior releases in the series on Steam. While the PS5 version has DualSense features used, I couldn’t get them to work in the PC version when played both wired and wirelessly with my DualSense controllers.

On a laptop with an AMD Ryzen 5-3550H processor (2.1GHz Base speed up to 3.7GHz), 16GB DDR4 RAM, and an Nvidia GeForce GTX 1650 4GB GPU, I tested No More Heroes 3 at 60fps and 120fps across different graphic presets and options. At the highest settings and 120fps target on this laptop, No More Heroes 3 ran at above 90fps at almost all times. Combat was nearly always at its 120fps target while the open world dropped to the low or high 90s. Turning down shadows helped a bit, but 60fps is very easy to achieve even on this older laptop with everything set to highest.

My experience with the port has been mostly amazing compared to the first two entries, but the fullscreen and v-sync have some issues right now in addition to shadows and draw distance in parts. I noticed the game not running as well in borderless or windowed on Steam Deck. It was great at fullscreen. V-sync also seemed to not work correctly on the laptop. One thing to note is that right now, the build on PC seems to have worse shadow (distance) and general draw distance compared to the PS5 version on both devices I tested it on regardless of the settings. Unless this changes when the game is running at 4K (which I could not test right now on PC), the PS5 version is the way to go if you don’t care about playing at above 60fps and have the console. I hope this is addressed in a patch, and will update this performance review when I hear back from Xseed Games or a patch releases.

On Steam Deck, No More Heroes 3 runs at 60fps and 800p with high anti-aliasing but turning down the shadows from the highest settings in my testing. The best stress test for this is playing around with the settings and getting on the bike to see how it runs. Note that the shaders have also not been cached initially so there will be some slowdown in parts as with other games on Steam Deck until you play more.

As mentioned above, currently videos do not play on Steam Deck and are black screens with audio playing over them. I tried Proton Experimental (bleeding edge), multiple versions of GE, and the public default release with no success as of this writing. I even re-installed the game twice to ensure some codecs were not getting left over in the process to make sure this testing was as thorough as possible. Barring this issue, it is a great experience on Steam Deck, but I can’t recommend it as your only way to play it until this is fixed with how good and important the cut-scenes are.

Should you buy No More Heroes 3 on Steam?

If you skipped No More Heroes 3 on Switch for a potential PC port, your wait has been worth it, but there are still some issues that I hope get addressed soon. It runs not only much better than Switch, but also goes well above the PS5 and Xbox versions that are capped at 60fps with support for uncapped frame rates on PC. I do hope the visual issues like the shadows and draw distance in parts on PC can be addressed to match or go above the PS5 version.

If you were skeptical of No More Heroes 3 because of the state of No More Heroes and No More Heroes II on PC, you can rest assured that this is a much better conversion, albeit not a perfect one. I’m hopeful that the few issues can be resolved for Steam Deck and PC, because barring the video issues, the Steam Deck version is easily the best portable way to play it when it comes to visuals and performance.

Hopefully my No More Heroes 3 PC performance review covering the port, Steam Deck, and more helped you decide if it is worth your time to grab No More Heroes 3 on Steam this month. I love No More Heroes 3, and am glad to see it come to more platforms for more people to experience my favorite entry in the series. Now Marvelous just needs to bring the remaining games to modern consoles and greenlight a new game with Grasshopper Manufacture.