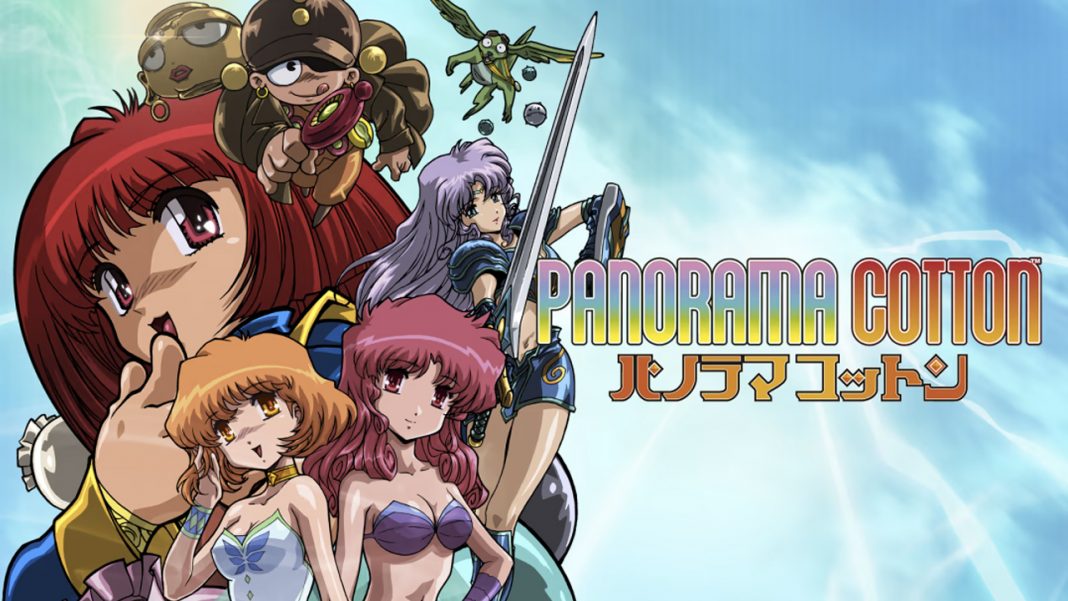 We’ve gone from having no releases from Success’ Cotton series in the West for a very long time to having multiple in just this year with more to come. A few months ago, I was introduced to Cotton through ININ Games’ excellent Cotton Reboot. Since then, Cotton Guardian Force Saturn Tribute released on PS4 and Nintendo Switch, but it was let down by emulation issues. That collection had me a bit worried about both the physical and digital releases of Panorama Cotton and Cotton 100%. Thankfully, these releases have been handled by Ratalaika Games who did the amazing recent Gleylancer release and both Panorama Cotton and Cotton 100% have been mostly great to play on Nintendo Switch.

Panorama Cotton is the third game in the Cotton series and it drops the side-scrolling shoot ’em up gameplay the series is known for. Instead, Panorama Cotton is a rail shooter that will feel familiar to players of Sega’s Space Harrier. Since this is a re-release and a new version of the original (that I never got to play), it has been interesting to see what Ratalaika Games brought to the table to make Panorama Cotton more accessible and how this release would allow for visual customization.

Before getting into the game and emulation options, Panorama Cotton only has its in-game menu and interface translated into English while the cut-scenes in the story are in Japanese. ININ Games will be patching a full text localization for English, French, German, Italian, Spanish, and Japanese in the coming weeks. Keeping that in mind, I can only discuss the story based on what I’ve seen in the images and with some rough translation. Cotton and Silk are on a journey once again to get the Willows back after discovering they are being burned and this is where the first stage begins. Willows are magical candy. That’s basically all you need to know in most Cotton games anyway, but it is disappointing that the release did not feature English subtitles from the get go.

Panorama Cotton is quite difficult, but this release has a few modern conveniences to help with that. The standard mode allows for rewinding, save states, and cheats. Cheats are locked behind the challenge mode which is a weird decision. Challenge mode is basically the original Panorama Cotton without any of the aforementioned conveniences. Hopefully the developers consider unlocking the cheat options for all players because some might not even venture into the challenge mode. Standard mode also allows you to adjust how shooting behaves and adjust the rewind speed.

While I was initially curious to see how Panorama Cotton would hold up when it comes to gameplay, the biggest surprise has been the visuals. Given that Panorama Cotton was developed for the Sega Mega Drive, it is quite the technical showcase with its gorgeous visuals. The aesthetic and visuals are easily the highlight of this release because it doesn’t really stand out gameplay wise compared to the other Cotton games. The bosses and mid-bosses are also fun despite being difficult initially. Even if you don’t think this game will be for you, it is worth watching a playthrough to see how much the Sega Mega Drive was pushed with these visuals.

This year, I learned that Cotton games have amazing soundtracks in addition to discovering how good this series is thanks to the new releases. I love the Panorama Cotton soundtrack and the third stage in particular is my favourite so far. It is catchy while perfectly complementing the aesthetic with a blend of upbeat music and more melodic tunes.

Ratalaika Games’ conversion here lets you switch between fullscreen, 4:3, and pixel perfect display options. You also get one of the most detailed sets of CRT options I’ve seen in any release so far. I first saw this in Ratalaika Games’ Gleylancer release, and it has made its way into Panorama Cotton as well. You can adjust scanline intensity, sharpness, curvature, gamma, mask type, and many more options with a live preview to fine tune your experience.

Barring the lack of the localization for the story cut-scenes, Panorama Cotton’s biggest problem is that it just isn’t as much fun as other Cotton games. I’m very glad that this release doesn’t have the input lag from the Cotton Saturn collection, but it needs a few more modern conveniences to be accessible to more people, rather than a curiosity for those looking to complete their Cotton collection on PS4 or Nintendo Switch. Panorama Cotton is a good cute ’em up, but one that is only essential for those who already have all the other Cotton releases on current systems.