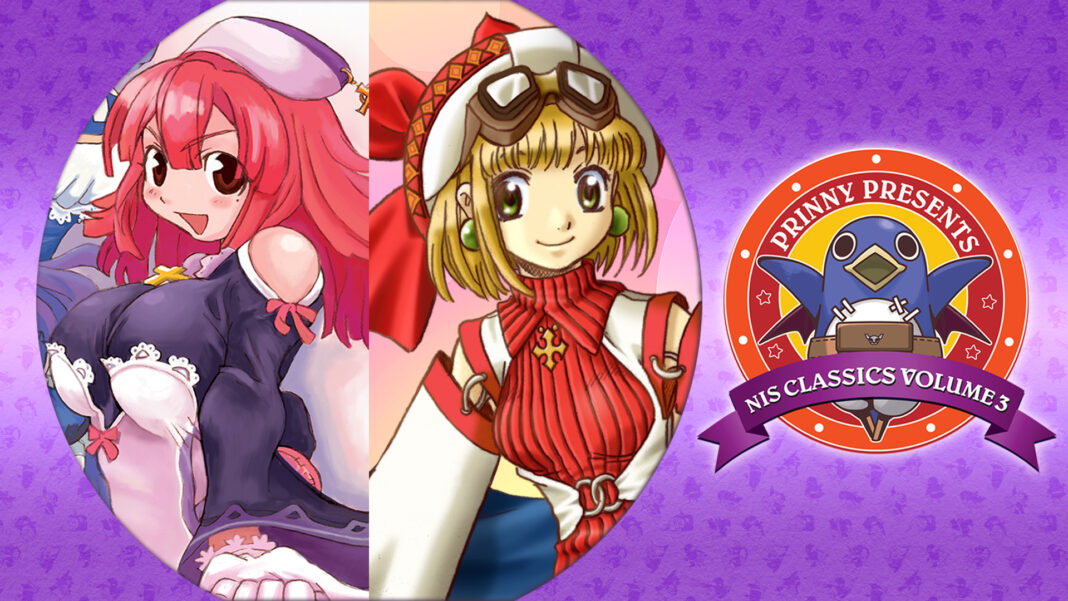 At launch, both the PC and Switch versions had different issues, but patches have arrived to address them including fixing La Pucelle on Steam Deck, which I will cover later in this review. One of my favorite aspects of NIS America’s Switch and PC support, is how the publisher brings classics to both platforms featuring content never available in the West before. These make the collections and individual games even more worth it for fans of NIS’ older titles, but also the best way to experience the games on modern platforms. For this release, Engine Software has handled the games while NIS Classics Volume 1 and 2 were handled by Codeglue.

La Pucelle: Ragnarok, based on the Japanese PSP version, is an enhanced release of La Pucelle Tactics (PS2), featuring new story content, DLC characters, additional voices and music, and a new fast travel option here. This is the best way to play La Pucelle for sure, and it is great to have it in the West on the most accessible platforms. Rhapsody, based on the PS1 original, looks surprisingly great on both platforms with proper scaling. This isn’t based on the DS version, so if you played that, you might find many aspects different. I haven’t played the originals, but found some interesting differences in gameplay while comparing them after NIS America announced this collection in the West.

La Pucelle on PC lets you adjust display mode, resolution, toggle muting audio when not in focus, and change the gamepad style. This lets you use Xbox, PlayStation, or Nintendo Switch Pro Controller button prompt options. There are no filter options here.

Rhapsody lets you adjust the filter with a CRT option, smooth option, and no filter. I played with no filter. You can also toggle vibration on or off here and adjust whether you want the music language to be English or Japanese. The PC-specific graphics options let you adjust display mode, resolution, toggle muting audio when not in focus, and change the gamepad style. This lets you use Xbox, PlayStation, or Nintendo Switch Pro Controller button prompt options.

Pre-release and day one, I had an issue with La Pucelle on Steam Deck. On a laptop with an AMD Ryzen 5-3550H processor (2.1GHz Base speed up to 3.7GHz), 16GB DDR4 RAM, and an Nvidia GeForce GTX 1650 4GB GPU, I had no trouble with La Pucelle and Rhapsody. They run without trouble and load quickly. They look a lot nicer scaling-wise compared to prior releases as well when played on the laptop screen versus just being fine on a smaller handheld display.

In addition to having button prompt support for Xbox, PlayStation, and Nintendo Switch Pro Controller, both La Pucelle and Rhapsody have good keyboard mouse support and also let you rebind buttons. This feels like it was actually designed to be released on PC from the start and not just ported last minute with the options which is great to see. This is still a bare-bones release compared to other retro re-releases that come with a wealth of bonus content, but Engine Software has done a great job with making this feel and look good on PC.

For my NIS Classics Volume 3 PC review, I also wanted to play both games on Steam Deck. Pre-release, I had an issue with La Pucelle on Steam Deck where cut-scenes and some other aspects of the game wouldn’t load correctly regardless of what Proton version I used. That was fixed recently alongside a crash in a later chapter. As of now, it looks and runs great on Steam Deck. If you wanted to pickup and play it on Steam Deck alongside your PC, it even has Steam Cloud support and I’ve had no issues swapping back and forth.

Rhapsody is a 4:3 game, and it actually felt better on Steam Deck thanks to the 16:10 display having smaller black bars compared to when you play a 4:3 game on a 16:9 display. Rhapsody never had issues on Steam Deck from the start, and it is a fine way to play it if you want to experience the Steam version on the go. I’ve set both games to display PlayStation prompts as well.

Should you play NIS Classics Volume 3 La Pucelle and Rhapsody on PC?

On PC, you can buy La Pucelle: Ragnarok and Rhapsody: A Musical Adventure separately, or in a bundle with digital artbooks. The Switch version only lets you grab both as a bundle. If you’re new to both games, they are very different, and I’ve enjoyed my time with them through this enhanced re-release. They feel good to play on PC and Steam Deck, and I’m glad Engine Software was quick with the fixes needed.

One thing I hope to see in potential future updates is the ability to use some in-game artwork instead of the black borders in Rhapsody. I know some might want a 16:9 stretched option, but I never use that when given the option to opt for the original aspect ratio. As a NIS Classics release, this collection is now the most-polished release yet, but it is disappointing that there was a crash issue at launch.

Hopefully this NIS Classics Volume 3 PC review helped you decide if the new versions of La Pucelle and Rhapsody are worth your time on Steam Deck and on PC. I hope this leads to more classics from NIS’ library being brought to modern platforms, but NIS America needs to work on better quality of life features like we see in other re-releases from older systems.