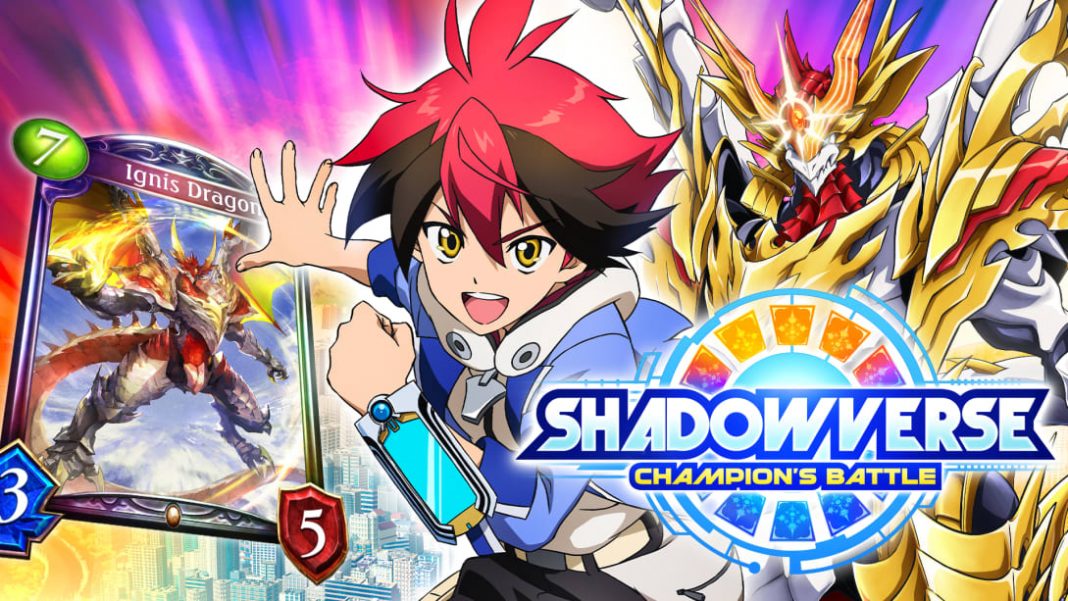 You play as a transfer student in Shadowverse: Champion’s Battle. You can set your own name and choose from one of two avatars when you begin. The story has you quickly befriending a colourful cast of characters including Hiro and his friends while you all try to first join the Shadowverse club. One thing leads to another and you discover that almost everything can be solved in-game by battling someone to prove your point or to bring them onto your side in the story. You get a lot of freedom here when you progress the story. The story here isn’t mindblowing but it gets the job done and is interesting enough to keep making you want to see where things end up after a big battle. If you just want to enjoy some card battles though, you can keep challenging NPCs or head over online as a break between story moments.

The core gameplay in Shadowverse: Champion’s Battle is a blend of card battles, character customization, deck building, interacting with NPCs, and the core story. I had a ton of fun just randomly challenging NPCs initially and later on to get more cards. You can and should also buy card packs with the in-game currency you earn through progression. The one aspect of the gameplay I couldn’t check out pre-release is the online. I never managed to find anyone playing online. I’ll be covering this in a separate feature once I’ve had some time to check out the online and how it holds up later on.

If you’ve played Hearthstone, the card battles will immediately feel familiar. I ended up loving how fast-paced these battles are compared to Hearthstone and also how little of a reliance there is on RNG. Being able to use both touch and button controls during battles is a welcome addition. The touch support is only available during battles here. You can also press L at any time to get a hint on what to do next if you’re stuck or not sure which move would be better in the current round. While Shadowverse: Champion’s Battle does a great job with its tutorial battles, it is nice to see an accessibility option like this available at all times for newcomers to card games.

Visually, Shadowverse: Champion’s Battle looks like a 3DS game upscaled in some ways. It is a nice and colorful game, but the 3DS JRPG feel I mentioned before definitely also includes some of the technical aspects. Thankfully, it feels a lot better to play than Yo-kai Watch 4 and Pokemon Sword & Shield do when it comes to performance during exploration on Nintendo Switch. The character models are the only disappointing aspect of the visuals. They should’ve been higher resolution. Some of the card battle animations are great and the actual artwork for the cards (when evolved as well) is excellent. This is expected given Cygames’ art is always top notch but it is still good to see these look really good even in-game on Switch here.

Shadowverse: Champion’s Battle features full dual audio. I ended up sticking with the English voiceover option for my playthrough and it was great across the board. I already mentioned how it included some of my favourite voices from English dubs like Xanthe Huynh, Joe Zieja, and more, but I think this is one of the stronger English dubs in a Japanese game in recent years. The music is catchy but overall nothing to write home about, but it gets the job done in-game. The in-game battle sound effects are very well done and seem to be from the main mobile and PC game for the same cards.

If you don’t enjoy card battlers, this game is not for you. Despite the fact that you could get around some aspects by constantly using the hint system early on, you will not enjoy most of what Shadowverse: Champion’s Battle has to offer. You should try the free demo though. Barring that, the only aspects of the game that feel a bit unpolished are the visuals and performance. The load times are good but there are some random stutters during exploration portions. The visuals are mostly good, but character models look a bit too low resolution even when played handheld.

In a lot of ways, Shadowverse: Champion’s Battle feels like it was developed just for me with how it perfectly captures the 3DS JRPG feel from games like Yo-kai Watch that I enjoyed a lot, and also includes accessible but deep card battling mechanics. While the few technical issues are unfortunate, Shadowverse: Champion’s Battle is a game I recommend to anyone looking for a great card game on Nintendo Switch. If you aren’t a fan of card games though, this might not be for you but I’d still recommend checking out the demo to see how you find the tutorials and early portions of the game. If you enjoyed Thronebreaker as a premium story-driven version of Gwent, Shadowverse: Champion’s Battle feels like a great equivalent to the original mobile and PC game. Shadowverse joins Slay the Spire as a card game I will recommend to just about any fan of the genre.