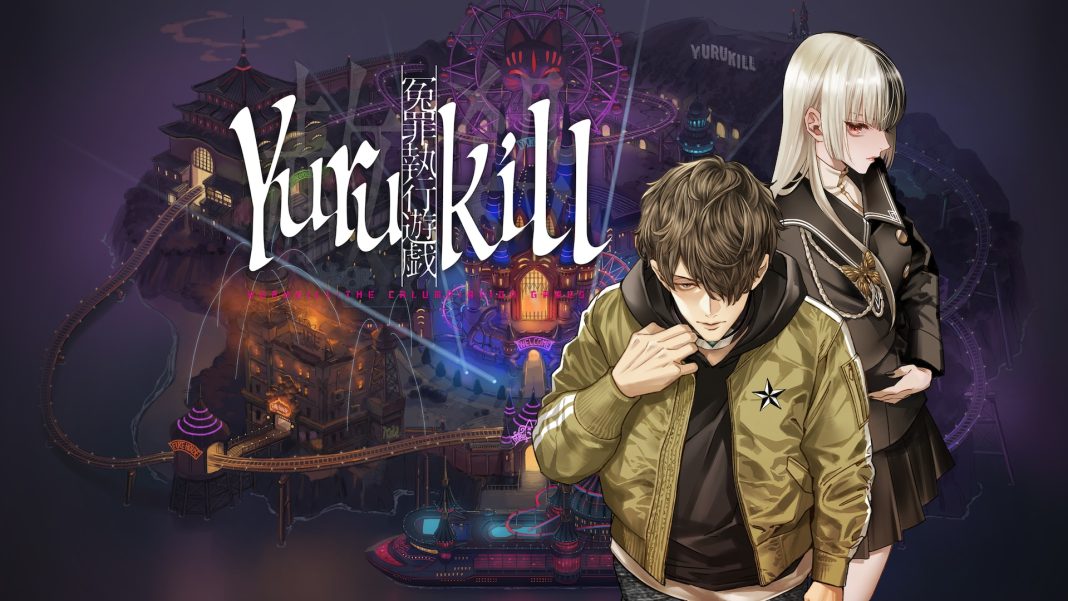 Yurukill: The Calumniation Games from Izanagi Games and NIS America for PS5, PS4, and Nintendo Switch is a game I had been looking forward to for a few reasons. It includes a narrative written by Homura Kawamoto (Kakegurui) and shoot ’em up gameplay from G.Rev (Senko no Ronde, Strania). I love shoot ’em ups and adventure games, so something that blends both with talent responsible for media I’ve enjoyed should’ve been great. Sadly, Yurukill bites off more than it can chew in both genres, with an experience that has far too many issues right now to be an easy recommendation on any platform.

Yurukill begins with you waking up in a prison cell. You meet a woman wearing a fox mask who is named Binko who informs you that you are a criminal sentenced to many years in prison. You have been falsely accused, but have a way of escaping. Yurukill Land is a theme park that pairs prisoners with executioners in teams. Teams that are successful at the Yurukill Games will be free. This involves solving puzzles, investigating, taking part in Danganronpa-like trial mini-game sequences, and partaking in shoot ’em up levels. Both the shoot ’em up and adventure game parts are closely linked, but they end up holding each other back by either feeling too disjointed or too basic.

What I like about Yurukill, is the character designs and voice acting. The soundtrack is also very good. If you’re a fan of either shoot ’em ups or adventure games, Yurukill will let you down in some aspect. It doesn’t excel at either genre. If the genre blend worked on a thematic level, it would’ve been fine, but it just feels like two different games were combined to be released as one.

While the presentation is quite nice, there are some technical issues even on PS5. Some cut-scenes or transitions feel sluggish. The dialogue history option had a loading screen which I’ve never had happen in an adventure game or visual novel before, but this has been mostly addressed with patches. There’s only a slight delay in loading it now compared to how awful it felt before, but it still isn’t instant which is how dialogue history or backlog text should be, especially on PS5.

When it comes to the shoot ’em up parts, I like how they felt and looked, but they only served to make me want a full-fledged shoot ’em up from G.Rev with this theme rather than the simplistic one included in Yurukill. Yurukill might serve as a nice introduction to the genre for adventure game fans, but isn’t much fun to play if you’re a fan of the genre greats. On the other side, shoot ’em up fans will likely tire of the story and adventure parts in between the stages. This disconnect is what makes Yurukill feel like a missed opportunity.

Barring my issues with the story and shoot ’em up portions, there are some technical issues. There have been a few patches since launch and pre-release that helped with the responsiveness in the interface like the dialogue history, but a game like this shouldn’t be suffering from any issues on PS5. I’m not sure if the demo build has been updated, but the original demo I played needed a lot of work on PS5. The final game is a lot better than that initial demo.

On paper, Yurukill: The Calumniation Games should’ve been something I enjoyed a lot given the genres it blends and the talent behind the release. Sadly, it manages to falter in the adventure and shoot ’em up portion. Yurukill as a premise has a lot of potential, and I hope Izanagi Games doesn’t give up on it. I would’ve preferred a pure adventure game with all the resources put into making that excel or a shoot ’em up with a light story instead of what we ended up getting in Yurukill. Yurukill isn’t a great adventure game and it isn’t a great shoot ’em up. Both sides feel tacked onto something that doesn’t justify the blend in genres with each holding the other back. While Yurukill isn’t a bad game, it could’ve been so much more.