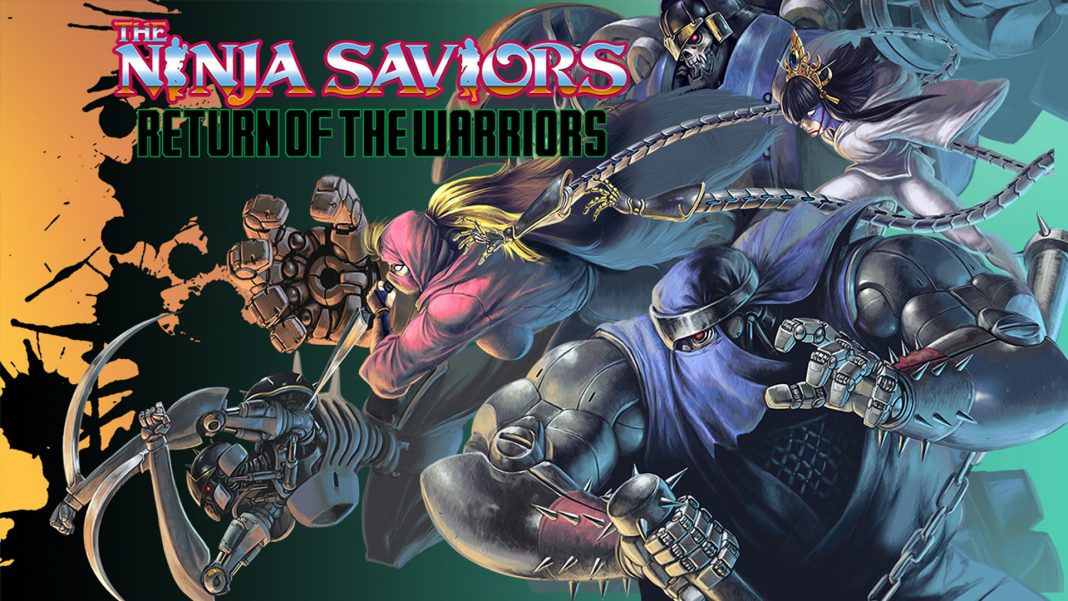 The beat ’em up genre has had a renaissance of sorts in recent times with the likes of Capcom’s Beat ‘Em Up Bundle and River City Girls to name a few. Months ago, I saw reports of The Ninja Warriors being remade for current systems and was quite interested in checking it out. A friend of mine who swears by the genre had only good things to say about The Ninja Warriors and after playing the newest entry The Ninja Saviors: Return of the Warriors on Nintendo Switch, I can see why.

A few years ago, the SNES classic Wild Guns returned to current systems as Wild Guns Reloaded. Just like that remake or enhanced release from NatsumeAtari, The Ninja Saviors: Return of the Warriors is a clear labour of love that builds on the base of the SNES original and brings a lot of modern improvements. These improvements range from massive visual and performance boosts, much better animations, more soundtrack options, visual options, and more. There are also two new characters included that you can unlock by completing the game and fulfilling a few requirements like difficulty or playing through with a certain character.

In terms of story, there isn’t much here as you’d expect from games in the genre. Banglar the tyrant has become the ruler of the land and it’s up to you to end his reign of terror. You are part of a small underground resistance as an untested android with your sole purpose to destroy Banglar as one of the five playable characters.

The core gameplay has you trying to progress in levels by moving ahead in a 2D plane while enemies attack you from both sides of the screen. Unlike many of the modern takes on the genre, The Ninja Saviors has you moving from left to right and vice versa with no 3D movement. This simplifies the gameplay a bit but the combat and animations are satisfying enough to keep things fresh with the multiple character play style options available.

You can even attack multiple enemies at once and use enemies to attack other enemies. Each character also has a meter at the bottom of the screen that fills up over time. You can unleash a powerful attack that uses up the full meter. This is very useful but isn’t something you can spam.

On the Switch, The Ninja Saviors fares brilliantly. Not only does it look and run great in both docked and handheld modes, but it also supports something every co-op game should have. You can play with a single Joy-Con each and have same screen co-op on the go anytime here. I noticed no performance drops with two players on the same screen and multiple enemies getting destroyed. One thing to note is that both players share the same health bar and meter when in co-op.

Visually, in addition to looking much better than the SNES original on modern screens, there are loads of display settings. You can adjust the screen size and aspect ratio as you please. The default setting is to stretch it a bit to fill in the screen but you aren’t really restricted here like Collection of Mana. There are also nine different scan line options available. Sprites are gorgeously detailed and I love how the environments look in each stage. This is definitely the best way to bring 16-bit games to modern systems that doesn’t involve a full scale remake. There is also a manual included that sees the developers go the extra mile and include sprites that show character attacks and special moves for all characters available including the button combinations needed.

By default, you only have access to the remake’s soundtrack. You can unlock both the original arcade soundtrack and the SNES score by completing the game in singleplayer and then completing it with the locked characters.

The only downside to this release is that it might be a bit too short for some for the asking price. It is definitely worth the price because nothing even comes close to capturing the SNES era beat ’em ups like this with the amount of polish added. You can finish a single run of the eight levels in about an hour and a half or just under that. Time attack mode will ensure you keep coming back for replays though with the added online leaderboard. I really wish The Ninja Saviors had online co-op support. Beat ’em ups shine when played in co-op with someone and allowing online would’ve made it much easier to jump in and get in a few playthroughs with friends.

Overall, The Ninja Saviors: Return of the Warriors is the best beat ’em up I’ve played in years. If you’ve ever wanted to check the genre out, I can’t think of a better game right now. It oozes charm and perfectly captures the SNES era feel with modern conveniences and much better visuals and performance.