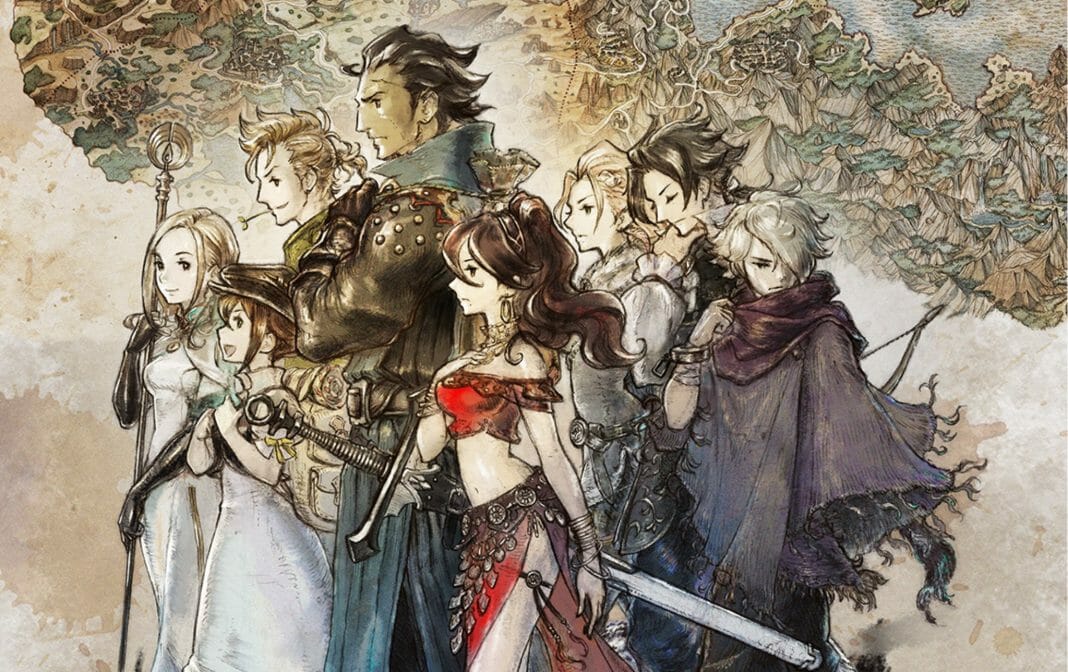 Ever since it was revealed by Nintendo in a Nintendo Direct, Octopath Traveler (or as it was known then Project Octopath Traveler) has been super interesting to see for a few reasons. Unlike many modern games that tried to appeal to 16-bit nostalgia, Octopath Traveler feels like a game straight out of the 90s if Final Fantasy had remained on Nintendo systems after Final Fantasy VI. It feels like a game built for an old-school audience that has a modern take on a classic look viewed through rose tinted glasses. Originally a Nintendo Switch exclusive that debuted worldwide last July, Octopath Traveler is now on PC bringing one of the better JRPGs of the generation to Steam. I’ve already played the Switch version for nearly 200 hours and it has been great revisiting it after a few months on PC.

Unlike many JRPGs available today, Octopath is very non-linear. You start out by selecting one of eight playable characters who will serve as your protagonist-for-a-while. I use that term because said character is locked in your party until you complete the main story after which you can freely rotate anyone in and out of your party. Once you select your character, you slowly explore, fight, learn, and grow in terms of combat and special skills. Your aim is to recruit more characters (out of the remaining seven) to make your journey easier.

One great thing Octopath does that is letting you know the recommended level you should be at before you enter an area. This gives you an indication of if you need to grind (yes that is something you will need to get used to in this game) and how feasible it is to walk around in the next area.

I mentioned how non-linear the game is, letting you more or less go anywhere when you aren’t in an active story quest. The way the game has been balanced, you will need to eventually recruit most of the remaining 7 other characters before you move to the next chapter for each character to ensure your party average level is good enough to progress. This is fantastic for people like me who love spending over a 100 hours in RPGs with great combat, but story enthusiasts will find far too many roadblocks in the way of what isn’t even the focus.

Octopath’s narrative is split up into 8 different stories that happen to take place in the same world. There are interactions between characters through skits that seem straight out of a Tales of game but the main stories for each character are fairly independent. There is an overarching plot and without getting into spoilers, it takes a bit to actually unlock it.

Combat is definitely a highlight of the game. Octopath uses what I like to call enhanced turn-based combat. There are enough enhancements to the tried and tested formula for battles to get over near instantly. It has a boost and break mechanic that lets you break through armor and do extra damage. You can also bank boost points to unleash massive combos or a super charged attack in a single turn. The strategy at play here is what makes the combat system so addictive. This is complemented by a job system that lets you play around with various skills even more for your ultimate party to take down just about anything that comes in your way. You unlock alternate jobs a few hours into the story and there are even some secret jobs.

Octopath aims for a visual style that not only appeals to nostalgia for fans of 90s JRPGs but one that blends it with a pop-up storybook style aesthetic. On paper, using high-quality effects like depth of field, bokeh, and more alongside pixel art textures in a 3D environment shouldn’t work well but the results are striking.

You have 2D sprites in a 3D world that has high-quality reflections and shadows that add to the storybook aesthetic. On Switch, Octopath looked good but it wasn’t native to either docked or handheld resolution. In fact, it even had sub native UI resolution when docked but thankfully the UI was 720p when played in handheld mode. Combat animations and particle effects for spells and attacks at a much higher resolution and frame rate are noticeable improvements.

Octopath Traveler is an Unreal Engine 4 game and it doesn’t really have demanding requirements which is expected considering it was developed for Nintendo Switch. The visual options in game lack proper explanation. There are low, medium, high, and highest options for anti-aliasing, post-processing, textures, shadows, and effects. No real explanation of what type of AA is used or anything and a few vague options that let the game automatically select settings for you which seems broken right now since it keeps switching between low and high with nothing in between. It will take a bit of tweaking to get it running how you want it though.

It is disappointing that the major issues with this port are the random stuttering and the title screen. The title screen issue is that it uses a low quality video playing in the background that gives players a bad first impression. It almost looks like the same video used in the Switch version’s title screen.

For a port that supports much higher resolutions and frame rate than the Switch version, you’d think Square Enix would want to show that bit off right from the get go. There are moments when the frame rate drops regardless of visual settings and it is random.

Combat with various particle effects and animations is almost always flawless when it comes to performance. The game itself was already great to play on Switch but it is good to see a version that doesn’t have low resolution interface elements and one that scales properly. For some reason, the game booted up at 720p and low settings when it runs without issues at 1080p at high settings on a laptop that has an Intel i7-4750HQ at 2.00 GHz, 8GB RAM, and a GTX 950M with 4GB VRAM.

When it comes to control options, you can play it completely using keyboard and mouse controls if you want and it has support for Xbox One button prompts only on the controller side of things. Sadly there are no DualShock 4 controller prompts right now. The mouse support is weird because you can use the mouse wheel for scrolling through the settings but not in game in any menu.

Barring those issues with the PC port, Octopath has a few issues that plagued the original Switch version and those are still present here. In 2019, you shouldn’t have to grind because your reserve party members don’t get experience when you’re fighting. The other issue is with side quests. Many of them are far too vague and you will likely end up looking up a guide because the rewards are almost always great. Given this port is almost a year after the Switch version, it is disappointing that no enhancements or improvements were made to the core game like Square Enix did with Dragon Quest XI S on Switch.

Those issues aside, Octopath has one of the best soundtracks of this generation. There are no bad tracks here and the boss battle music has character specific intros that elevate the whole experience. Even the audio design is great across the board with subtle sound effects for interactions. If you aren’t a fan of English voice acting, you can switch to Japanese voice acting. This is definitely one of Square Enix’s best localisations till date and they had some great voice acting done for both languages.

If you skipped the Switch version or don’t own a Switch, this is a competent port of a great JRPG. Players who value story above all else will likely be disappointed by the narrative flow in Octopath but if you value gameplay and aesthetics, this is a must buy. Just be ready to stomach a very high asking price which is the same as that of the Switch version when it launched last year.