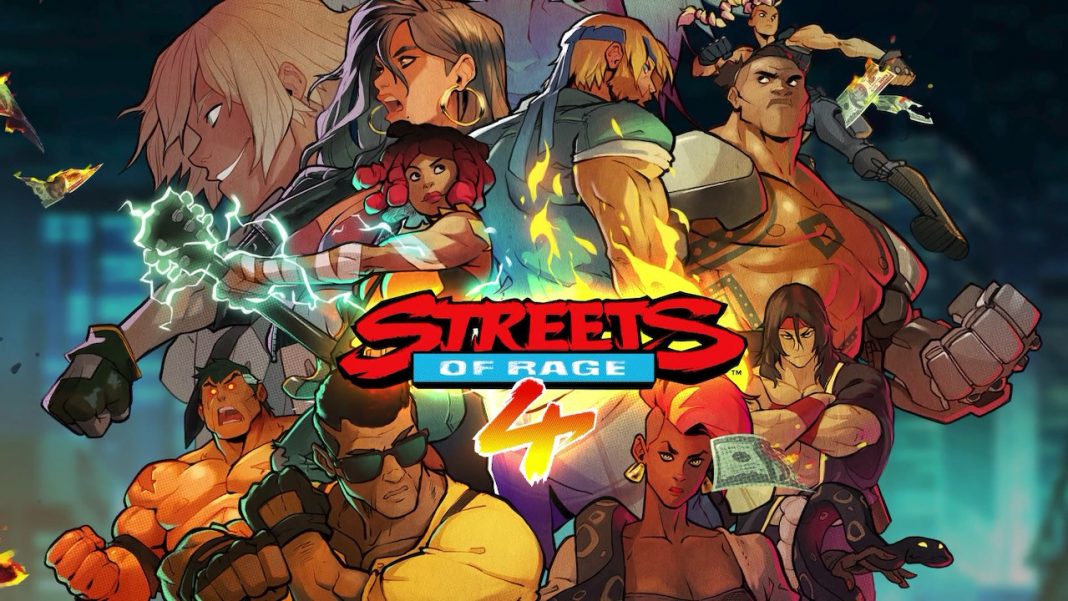 Over the last few years, many classic beat ’em ups have been brought to modern platforms individually or through collections like the Double Dragon and Kunio-kun Retro Brawler Bundle and we’ve even had newer beat ’em ups like River City Girls. New entries in older franchises arriving more than two decades later is something that doesn’t happen too often. A while ago, Lizard Cube, Guard Crush, and Dotemu announced that they are working on a new entry in Sega’s long-running Streets of Rage franchise in the form of Streets of Rage 4 and that announcement left a few people skeptical. I wasn’t skeptical but more excited because Lizard Cube and Dotemu already did a fantastic job with Wonder Boy: The Dragon’s Trap on consoles, PC, and mobile. Streets of Rage 4 is finally available on all platforms and it is a fantastic beat ’em up for longtime fans of the genre and newcomers.

Streets of Rage 4 does a lot of things really well to make it feel modern while still remaining true to what made old arcade beat ’em ups good in the first place. It has both simple and more complex attacks, great level design, fantastic music, and a varied cast of unique characters.

Initially, you have access to the story mode, battle mode, and online mode. The story mode is split up into 12 stages with their own enemies, gimmicks, and boss fights. The flow of most of the levels involves moving across a stage, taking on different groups of enemies, collecting health or money, and dealing with a powerful boss at the end. The story in Streets of Rage 4 will take you between three and four hours to complete depending on the difficulty option you select.

Speaking of difficulty, in addition to five difficulty options ranging from easy (for beginners) to Mania (for hardcore Streets of Rage players), there is also an assist mode. This restarts a level but lets you add lives and stars for star moves that are character ultimate abilities. Using assists reduces your overall score but has no penalty with completing the story.

Visually, Streets of Rage 4 is probably the best modern reimagining of an older franchise ever. It goes above and beyond what I’ve seen with recent Wonder Boy and Monster Boy releases and has animation that reminds me of the newer Guilty Gear games in quality. Every combo and special looks gorgeous and there are tons of callbacks to other franchises that had beat ’em ups like Teenage Mutant Ninja Turtles.

Each character has their own normal attacks and combos but also a special move that uses up some health. You can recover health by hitting enemies and collecting power ups. Barring the basic moves, you can also grab enemies and perform more powerful blitz moves and even juggle weapon attacks during combos. Each character also has their own star move that can only be used after collecting a star in a stage.

When it comes to performance and load times, I only noticed two frame drops during the story mode on Nintendo Switch. The rest of the game ran perfectly. I also played Streets of Rage 4 on Xbox One X to compare. It is pretty great to see the porting studios (Seaven Studio for Nintendo Switch and BlitWorks for Xbox One) manage polishing these releases to almost perfection for release. I say this because many Nintendo Switch ports often have issues compared to other consoles.

On the audio side of things, Streets of Rage 4 has a soundtrack featuring an all star lineup of Olivier Deriviere (A Plague Tale, Remember Me), Yuzo Koshiro (Streets of Rage, Etrian Odyssey), Yoko Shimomura (Kingdom Hearts, Radiant Historia), and more. The soundtrack is easily my favourite beat ’em up soundtrack ever with the new songs and few callbacks to older tunes. It also retains the series staple of having experimental electronic music. The tracks composed by Yuzo Koshiro like “They’re Back” and Olivier Deriviere like “On Fire” are my favourites of the soundtrack.

While Streets of Rage 4 has a gorgeous aesthetic with some superlative designs, there are a few visuals and audio options to make the experience feel more old-school. Visual options like filters and a retro soundtrack options are available from the get go with loads of older characters to unlock by reaching overall score targets in the game.

Once you complete the main story mode, you have access to stage select that lets you replay stages from the story on the difficulty you played it on, an arcade mode that gives you just one life, and a boss rush mode. As you complete more of the story, you also unlock more extras that include galleries on the characters, enemies, and environments.

One aspect of Streets of Rage 4 that I am both impressed and disappointed with is the online. This is the first game I’ve played that uses the Nintendo Switch native online invite system. This is something that works brilliantly and yet even Nintendo doesn’t use it in its own games. The online has been hit or miss so far with some games running well but others being a complete slideshow. The only gameplay aspect I didn’t like is how some of the bosses feel unfair in the middle of the game.

Streets of Rage 4 goes above and beyond what a modern beat ’em up should be with superb gameplay, gorgeous visuals, excellent music, a ton of unlockables, and more. If you’ve never played a beat ’em up ever, this is the one to get. I’ve already finished the main story thrice and can’t wait to up the difficulty again and redo it all. Streets of Rage 4 is that good.