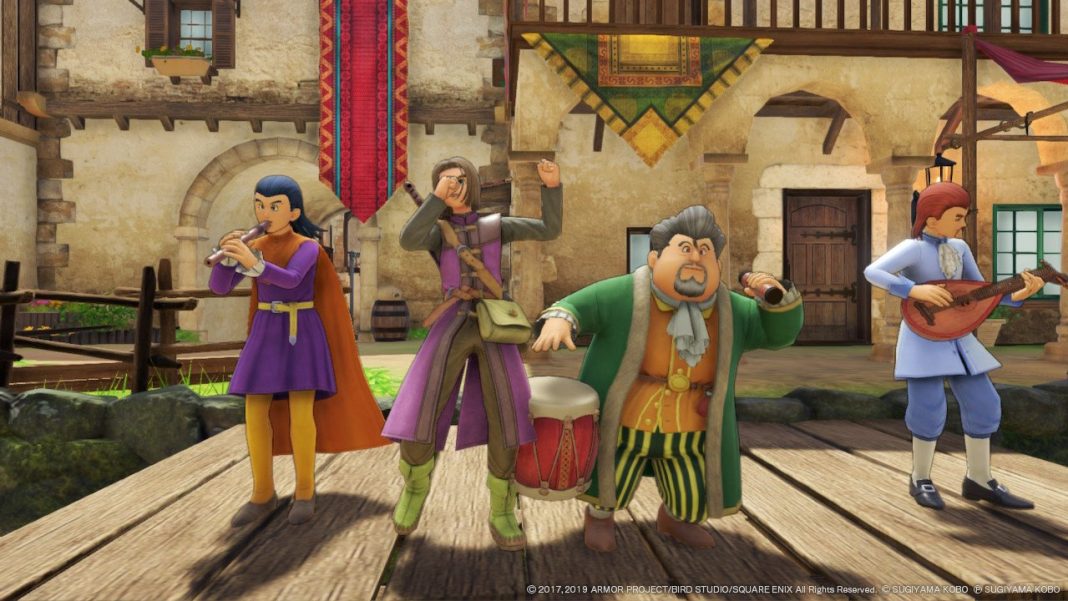 Dragon Quest XI S rewards you for straying outside the norm. Each area is massive and there are tons of secrets and treasures hidden in each area. Use Erik’s nose for treasure skill to find out how much you still haven’t found yet. Dragon Quest XI S also has a ton of verticality allowing you to enter different floors in buildings. You are almost always rewarded for spending time exploring. If you notice a shiny spot on the map, it is worth going and collecting the item. If you see a well, try and climb down it for even more hidden items. The developers have really crammed a ton of stuff into this game and reward you if you stray off the beaten path.

While exploring, you often see bookshelves with a red book that noticeably sticks out. Make sure you always read these books because you are rewarded with new recipes or can make progress in quests through the information learned here. Cupboards often have useful equipment hidden away. Even the opening area has some interesting gear hidden away in cupboards so make sure you open every one you find.

Every location is full of barrels and pots that you will be able to spot a mile away almost. These are usually found in groups of two or three and you are rewarded for breaking them with items and crafting equipment so keep doing this to pots and barrels whenever you spot them during your journey. If you don’t find an item, you often find gold which is difficult to come by early on.

Dragon Quest XI S campsites and how to use them

While Dragon Quest XI S has auto-save, you should always rest at new camps you come across. This will let you unlock new fast travel points and take advantage of the various facilities available at camp like healing, removing poison, finding out how much experience you need to level up, and more. You can also use campsites as a healing point while fighting enemies to grind experience because you can always come here and heal for free.

How to level up in Dragon Quest XI S: skill points matter

Unlike most JRPGs, Dragon Quest XI S lets you re-assign skill points for a small fee whenever you want soon after beginning the game. While some characters play better with specific abilities, don’t worry about unlocking the “wrong skill” because you can always go back and change things up. The one bit of advice I will give you for skills is try and stick to a specific path because unlocking a single skill from each tree for a character early on ensures you will not get far because you can’t be a jack of all trades until later on in the game.

After a certain number of encounters, your characters will be pepped up. This means they have a higher chance of critical hits and have other stat buffs. Pep Powers are extremely powerful so make sure you try and use them on more powerful enemies or bosses. A side quest in the opening portion of the game will teach you how to use pep powers so make sure you do it.

Just like the side quest for Pep Powers, each new area in Dragon Quest XI S has a few side quests and while some of them seem a bit tedious, the rewards are more than worth the time put in. If you don’t have time to do the quest right now, at least accept the ones that you can come back to later.

Dragon Quest XI S: how to use 2D mode

Dragon Quest XI S on Nintendo Switch lets you enjoy the whole game with retro styled 2D visuals. This is not available in any other platform outside Japan and is a nice throwback to earlier Dragon Quest games. You can change to 2D mode at any goddess statue or church.

Unlike the PS4 and PC versions, Dragon Quest XI S on Nintendo Switch lets you experience the game with a full orchestral soundtrack. You can switch to the old midi music but this is the only version that has the full orchestral option.

If you aren’t a fan of English voice acting, Dragon Quest XI S on Nintendo Switch has a new Japanese voice track option which you can use. One thing to note here is that some names might have inconsistencies because characters like Jade are named differently in Japan (Martina).