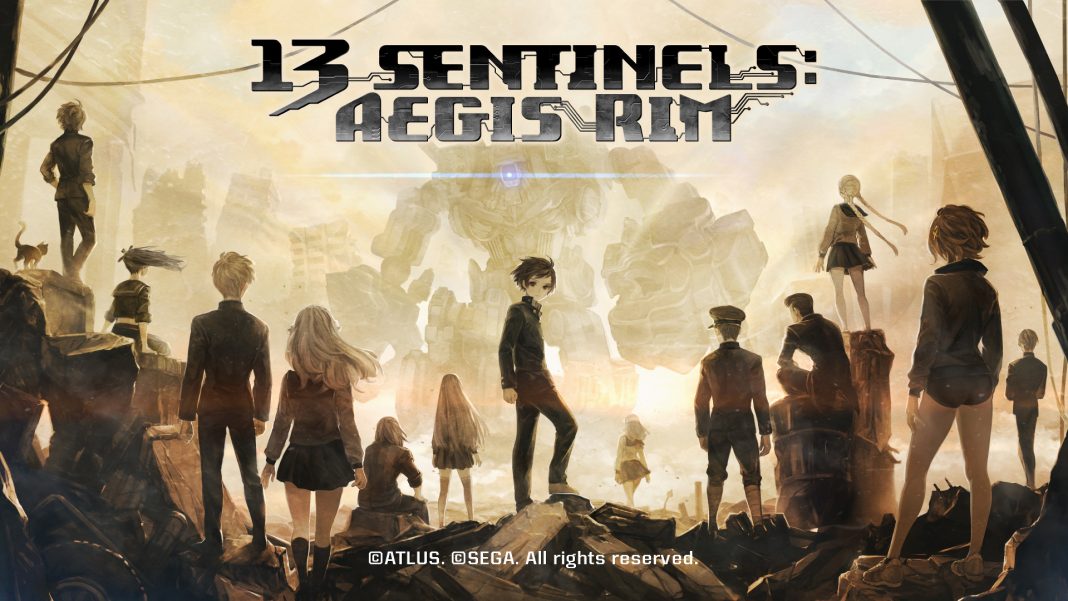 I discovered Vanillaware and Atlus at the same time through Dragon’s Crown and Persona 4 Golden on PS Vita back in 2013. Vanillaware’s striking visuals have been a staple in every game I’ve played developed by them since, with Odin Sphere being the most recent one. During that time, I had been reading about the company’s next game which was in the works for a long time and always felt very ambitious. 13 Sentinels: Aegis Rim for PS4, the newest Atlus and Vanillaware collaboration, is finally here and the wait has been more than worth it.

13 Sentinels: Aegis Rim is a cross-genre game that blends in point and click adventures, visual novels, and real-time strategy for an experience unlike anything else. When I originally read the premise and played the 13 Sentinels: Aegis Rim prologue demo that was released in Japan, I felt like Vanillaware had bitten off more than it can chew in ambition here. Having now played the final localised game to 100 percent completion, I can see the genius behind it and I’m glad that the developer tried its hand at sci-fi after the fantasy setting of Dragon’s Crown. This is a very special experience.

You control 13 protagonists here and experience different perspectives of multiple plotlines in an overarching story in 13 Sentinels: Aegis Rim. This isn’t a simple and straightforward story at all. Each protagonist has their own motivation and you end up seeing things play out differently with multiple possibilities. As you progress through one character’s story, more paths open and you will need to play out another character’s route for a bit to see something that will help you progress someone else’s story. On paper, the story seems a bit too complex for its own good in delivery but it is extremely well done.

The point and click adventure portion of 13 Sentinels: Aegis Rim called Remembrance features you controlling one of many characters who interacts with others across a variety of environments and time periods. When you control a protagonist, you can talk to interact with others and gain keywords. These keywords will let you understand said protagonist’s thoughts on a particular thing. You can also use some keywords while talking to other people.

The keywords you collect are indicated by coloured icons on the top right of the screen. These keywords help you progress through different paths in each character’s flowchart. The flowchart also mentions which keywords you need for an alternate path. It is very well done and doesn’t rely on much repetition through things you’ve already seen like most visual novels.

13 Sentinels: Aegis Rim’s plot involves 13 protagonists, giant robots (called Sentinels), different time periods in Japan, romance, betrayal, and borrows from many forms of science fiction media. You initially are shown a broadcast revealing that giant creatures have invaded Japan. A high school girl in the middle of the street stops while everyone else is running to evacuate and she summons a giant robot by swiping her thigh. This puts you in the combat tutorial that introduces the basic real-time strategy combat mechanics 13 Sentinels: Aegis Rim’s battles include.

Without getting into any spoilers for the plot, I loved 12 of the 13 routes all the way and only was disappointed by one of them because of how it felt like it was just included for story exposition and to explain the plot to players towards the end. Shu Amiguchi and Yuki Takamiya are my favourites of the cast barring a few others I won’t mention for spoiler reasons.

Battles in 13 Sentinels: Aegis Rim are a part of the Destruction part of the game and they take place across different maps where you usually are protecting a terminal from hordes of enemies. These enemies vary by stage and you have access to up to six characters in your active team. Each stage has its own requirements and missions that will reward you with extra unlockable content and a better score.

13 Sentinels: Aegis Rim has three difficulty options for battles which you can change before beginning any stage. I’d recommend sticking to normal or playing the harder difficulty option if you are familiar with real-time strategy games. Most of the battles don’t take over a few minutes each and they are all great spectacles with colourful neon particle effects, massive explosions, and a lot of destruction.

As you progress through the story in Remembrance and finish battles in Destruction, you unlock Mystery Points and Mystery Files. You use the points to unlock files and lore that explain various things in the game better and give you an easy to access glossary for the various terminology 13 Sentinels: Aegis Rim uses. The presentation for the three modes and all menus in the game is amazing and that is just the tip of the iceberg when it comes to how great this game looks.

In my 60 hours on PS4 Pro, I had only 3 instances of performance issues. The first was a minor drop during a cut-scene. The remaining ones were in battles towards the end of the game where things get very hectic. These weren’t game-breaking by any means but the frame rate target of 60fps took a noticeable drop when there were too many enemies on screen in the two battles. Depending on how quickly you read and finish battles, expect to see the entirety of 13 Sentinels: Aegis Rim’s story in between 40 and 50 hours.

Barring the performance issues in two late-game battles, the only problems I have with 13 Sentinels: Aegis Rim are in the structure and with one character’s route that feels not as well realised as the rest of the cast. The freedom to progress stories at your own pace and do battles when needed is great on paper but I felt like the two could’ve been interwoven better. Utawarerumono handles this better albeit with its much simpler structure.

Barring those things, every area of 13 Sentinels: Aegis Rim including the localisation is brilliant and polished to a sheen. This includes the voice acting and music. Basiscape that features the legendary Hitoshi Sakimoto (Valkyria Chronicles, Final Fantasy XII) have delivered its best work yet in 13 Sentinels: Aegis Rim with a score that perfectly complements the game’s setting with memorable melodies, grandiose piano, and techno blending in perfectly. 13 Sentinels: Aegis Rim will likely get a lot of praise for its storytelling and writing but Basiscape’s soundtrack deserves a mention alongside the art and writing not just for its battle themes but also the vocal theme that plays at important moments.

When it comes to voice acting, 13 Sentinels: Aegis Rim will add an English audio track option through the day one patch which is not live as of this writing. The Japanese voice cast is amazing and it even includes Ami Koshimizu who voiced Ryuko Matoi in Kill la Kill as Yuki Takamiya. This game has more voice acting than most JRPGs and every individual including the NPCs and minor characters sound perfect.

If you were already interested in 13 Sentinels: Aegis Rim, you should get the game and play it as soon as possible. It will not let you down. For those on the fence, I can only see one area of the game that might be difficult to overcome. The opening moments throw a lot of names and characters at you making things hard to follow. This might be an issue for some who aren’t too familiar with adventure games and visual novels.