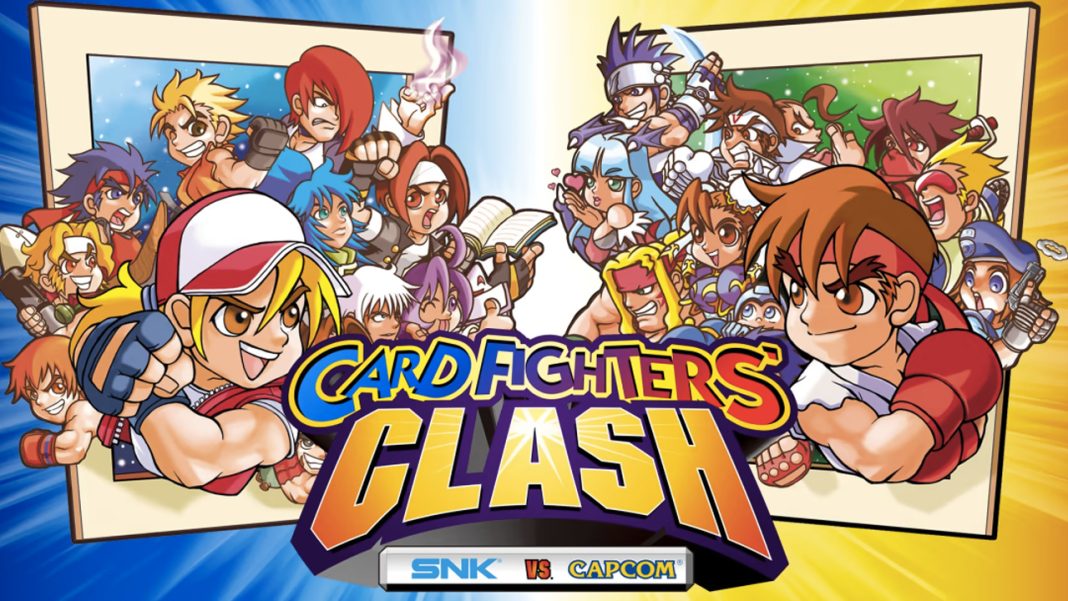 SNK and Code Mystics have brought many Neo Geo Pocket Color classics to Nintendo Switch individually and in a nice collection. Code Mystics made sure these games play brilliantly on Switch both docked and handheld with many visual and control options. The games then made their way to Steam with support for Steam’s Remote Play Together feature that elevated these releases even further. Following that, there was a bit of uncertainty for when the next batch or game would be released. This month, SNK Vs Capcom: Card Fighters’ Clash got a surprise release on Switch and I’ve been enjoying my time with it from the minute I launched it for the first time.

SNK Vs Capcom: Card Fighters’ Clash feels a lot like a blend of a collectible card game with older Pokemon games in how the game flows. Your aim is to beat every opponent through the story across the different themed locations. Your aim is to use your cards and special abilities to bring your opponent’s health to zero. As you progress, you earn more cards to use in the various battle phases. I was surprised at the amount of depth here. As someone who has played far too much Hearthstone in the early years of the game, I’ve enjoyed playing card battlers like SNK Vs Capcom: Card Fighters’ Clash and even Shadowverse: Champion’s Battle on Switch to get my fill with Hearthstone not being as much fun for me anymore.

One aspect of SNK Vs Capcom: Card Fighters’ Clash that is worth highlighting on its own is that Code Mystics implemented both the Capcom and SNK versions together in this single release for $7.99. It also supports trading in between versions (as long as you play using the same language version) letting you collect all cards on your own. Save data linking is also possible with SNK Vs Capcom: Match of the Millennium or the Neo Geo Pocket Color Selection Volume 1 package to unlock in-game bonuses. Code Mystics went above and beyond here and I appreciate that as someone who never got to experience these games on their original hardware.

While you are able to play the Japanese versions of both the Capcom and SNK versions of the game, it is worth noting that you cannot trade with other language versions. The Japanese and English versions have their own saves as well.

As with prior Neo Geo Pocket Color games, Code Mystics allows for a few display options. You can apply a filter, adjust the zoom level of the screen, remove or use multiple skins, remap controls, and more. You can also rewind while playing. Barring these, you can also play with two people on the same Nintendo Switch console screen which is nice to have. One thing I hope for a potential future patch is more save slots.

If you aren’t a fan of card games, this might not be an easy pickup despite the low asking price. The mechanics are explained well and there’s an in-game manual included which is lovely to see as with other Code Mystics releases. I know some people might be waiting on a potential Neo Geo Pocket Color Selection Volume 2 before jumping into this and I can’t blame them. I hope it does happen so I can own a physical copy of this excellent and fun card battler.

SNK Vs Capcom: Card Fighters’ Clash is an essential for card game fans on Nintendo Switch. Releases like this only remind me to spend more time looking at games in genres I enjoy on older platforms I didn’t own. Thankfully, this Code Mystics release has let me experience a superb version of SNK Vs Capcom: Card Fighters’ Clash. Including both games and the usual awesome extras is only icing on the cake.