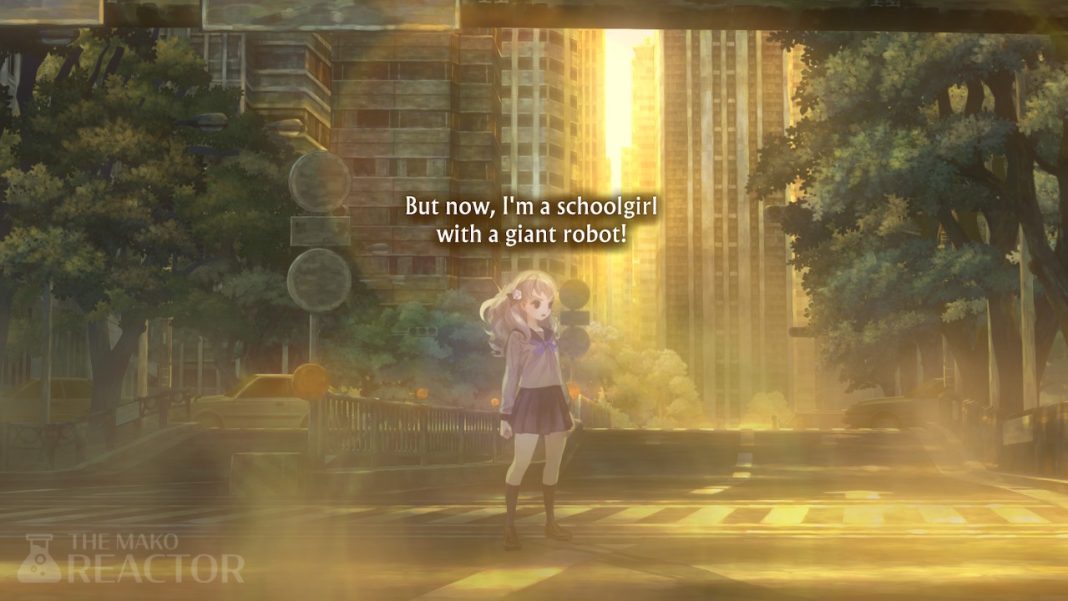 13 Sentinels: Aegis Rim from Vanillaware and Atlus was our Game of the Year in 2020 when it was released in the West. It is a fantastic sci-fi experience with superlative storytelling blending genres and a masterpiece. Read my review of the PS4 version here. Over the last few weeks, I’ve been playing it for my 13 Sentinels: Aegis Rim Switch review and have been enjoying the story with English voice acting while checking out how the port holds up in the later battles with tons of enemies, the infamous missile rain skill, and more.

I’ve now put in over 120 hours into the game across PS4 Pro, PS5, Nintendo Switch docked and handheld, and Nintendo Switch Lite. It has been interesting seeing how the game scales above 1080p, below it on Switch, and how Atlus and Vanillware have brought this gorgeous experience to Nintendo’s hybrid system with some cutbacks to ensure it runs as well as it can.

For my 13 Sentinels: Aegis Rim Switch review, I wanted to focus on how the story has aged for me, how it feels with English voice acting having experienced it with the original Japanese voices, and more importantly how it runs on Nintendo Switch both docked and handheld in the more hectic battles towards the end of the game. What set 13 Sentinels: Aegis Rim apart from other games is how it blended different sci-fi tropes, 13 protagonists, different time periods, romance, betrayal, and much more. I will not get into spoilers, my issues with the story are focused on one single protagonist’s route that felt like an exposition dump more than anything else compared to how well the other character stories played out. Yuki Takamiya remains my favorite character in 13 Sentinels: Aegis Rim alongside one I will not mention for spoiler reasons.

Even though I already knew everything about 13 Sentinels: Aegis Rim, it was fun experiencing the gameplay loop again. It isn’t a pure adventure game, but one that features real-time strategic battles involving the titular sentinels. These come under the “Destruction” mode of the game. The story beats are a part of the “Remembrance” mode while the final mode in the game is “Analysis”. Analysis is where you look up terms, characters, events, the timeline, and more to get a better perspective on the plot so far. Remembrance mode has you experiencing different character stories across their own branching paths in a flowchart. 13 Sentinels: Aegis Rim makes it very easy to get to see everything compared to some other games with its thought cloud and keyword structure for progressing the plot and interacting with characters.

Comparing Nintendo Switch to the PS4 version (played on PS4 Pro and PS5), there have been cutbacks to the resolution when played docked, and some changes to certain 3D elements in battles alongside post-processing. Some effects are absent on Switch like the depth-of-field as well, but every visual change or cutback has been worth it for how well it looks and runs for the most part in handheld mode. I would’ve preferred a slightly better image quality when played docked, but seeing how some skills cause performance issues even in battles at the middle of the game in area 2, I can see why it isn’t a higher resolution. Barring the combat, I did notice some slowdown in specific adventure gameplay moments, but it wasn’t too bad.

Seeing how the game ran on base PS4 before and then PS4 Pro when I originally reviewed it, I’m pleasantly surprised at how good this port is despite the performance issues it has. They are noticeable for me, but not dealbreakers at all. The real star of 13 Sentinels: Aegis Rim on Switch is how it looks and feels in handheld mode. I already mentioned how I was disappointed by the lack of touchscreen support that visual novels and adventure games usually have on Switch, but this port is basically everything I had hoped for in handheld mode. It looks amazing and Vanillaware’s artwork shines on the OLED screen. It is also very responsive through menus and in gameplay.

Having touched on the general performance and issues in certain battles, I wanted to specifically address how 13 Sentinels: Aegis Rim runs on Switch when using Missile Rain upgraded in a busy battle. Initially, it doesn’t seem too bad, but when you use it a few times and have other flares and many enemies on the battlefield, there is noticeable slowdown. I was honestly surprised at how well it held up with all the chaos on screen. Even with the slowdown, the only time it got annoying, is when moving the camera had slowdown after a big explosion with particle effects. Overall, even when I tried pushing the Switch by using Missile Rain and other abilities in quick succession after upgrading the Sentinels to cause as much chaos on screen as shown in the screenshot below, it held up better than I expected it to with just slowdown for a few seconds.

While the Nintendo Switch version of 13 Sentinels: Aegis Rim has some cutbacks to visuals and slowdown in a few more places compared to the PS4 version, the tradeoff is having a full portable version of the game. When 13 Sentinels: Aegis Rim was originally announced for PS4 and PS Vita, I was planning on getting on PS Vita after playing Dragon’s Crown and Odin Sphere on it. That obviously didn’t work out, and while it looks gorgeous on the big screen, there’s no denying the quality effort put into making 13 Sentinels: Aegis Rim look so good on the Switch handheld screen.

13 Sentinels: Aegis Rim is easily one of the best games in a decade and an absolute must play on Nintendo Switch. I was skeptical of how it would run in parts given the performance issues on PS4, but the port is very well done despite some expected issues. If you already played it on PS4, there isn’t anything here that warrants buying it again unless you want to replay it on a portable in which case, it is definitely worth it. It truly shines on the OLED display on the Nintendo Switch. If you skipped 13 Sentinels: Aegis Rim on PS4 for whatever reason, you owe it to yourself to get it here. It is one of the best games on Nintendo’s hybrid system alongside Dragon Quest XI S, Octopath Traveler, Shin Megami Tensei V, Triangle Strategy, and Xenoblade Chronicles 2.