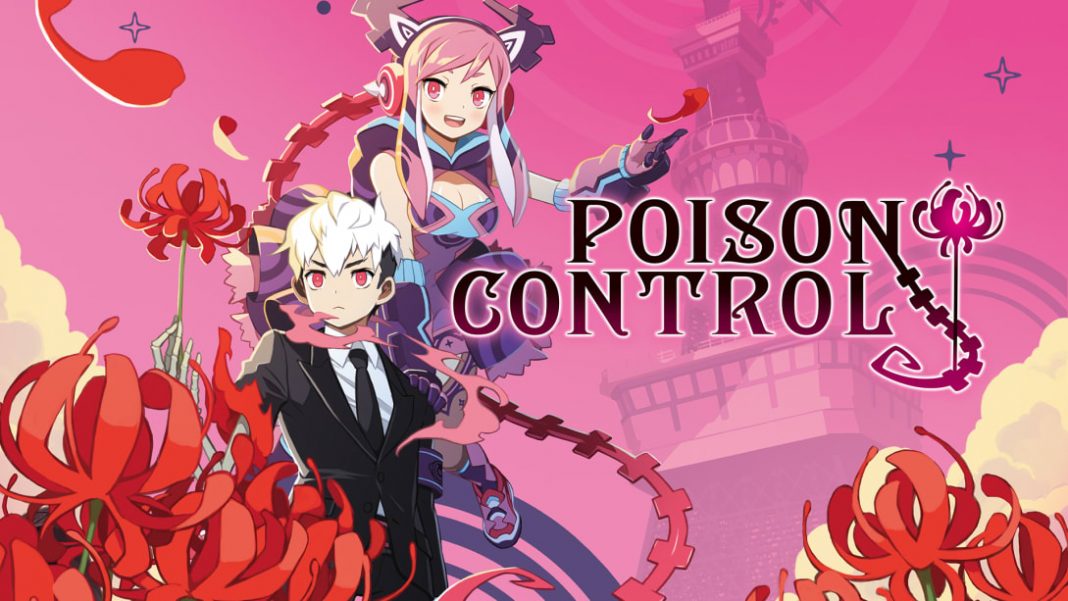 While most people are familiar with Nippon Ichi Software’s Disgaea games, the developer also has many smaller projects that are of varying degrees of quality. These range from excellent games like Yomawari: Night Alone and Mad Rat Dead to not so amanzing games like The Princess Guide and The Witch and the Hundred Knight. Poison Control is the newest game from Nippon Ichi Software and it has quite a few interesting ideas with a lovely aesthetic but suffers from many gameplay and technical issues.

You play as someone who wakes up in hell trying to find a way back to the mortal realm. Your body is taken over by Poisonette and you will seemingly only be free once you purify the hell you’re in by exploring the areas available in-game. Your aim is to now play as someone with two souls in a single body as you purge poison, take down enemies known as Klesha, and try to figure out the origins of each ‘Belle’ and her ‘Hell’. The Belle and Hell system here will remind you of Persona games with how you try and solve problems or cleanse the thoughts within a dungeon to rescue them or witness their stories which can get pretty sad.

Poison Control’s core gameplay loop has you purging poison through switching into Poisonette and encircling the various mires in each area. I like this drawing patch mechanic to not just cleanse areas but also damage enemies before using your weapons to finish them off. Given the two souls in one body system here, there can only be one at full power at once and this plays into how you can transform within a dungeon to cleanse poison and how you are limited by how far you can move away from the vessel you have. I also enjoyed the way you learned about the Belle by drawing paths to clear out different locations and find clues to her story. Sadly the actual shooting and movement controls leave a lot to be desired.

You initially start with a basic gun in Poison Control but slowly unlock more tools to deal with the stronger foes that await you in later areas. The actual gunplay could’ve been fun if it didn’t suffer from aiming and control issues because I enjoyed the light customisation available and variety of weapons. Adding gyro controls would’ve definitely helped with making the shooting less tedious here because the current controls have you holding one button to draw your weapon, one to move, one to aim, and finally one to shoot. It doesn’t help that the hitzones also feel off depending on your distance from an enemy. I hope NIS doesn’t give up on these purging and path drawing mechanics because they definitely elevated the gameplay in Poison Control to not be just a badly controlling third person shooter.

Visuals are easily the best part of Poison Control. It borrows from the interface and animations in The Princess Guide but still looks very striking with its pink aesthetic. I love the menus and most of the character portraits here. Poison Control sadly has some of the portrait animation issues from The Princess Guide but it looks generally much better and more consistent. There are some instances of blurry assets though but the iconography is really good overall. Even the 3D models for characters look good but performance and load times are where Poison Control suffers.

The later areas also seem to be less optimised with how the performance fluctuates compared to early stages. Even in early areas, it doesn’t feel as smooth as it should both docked and handheld and the control issues add the overall technical problems. Some visual effects in busy scenes also feel out of place with the bloom getting bugged in some situations causing the overall image to look brighter than it should. I tested Poison Control both docked and handheld on Nintendo Switch and in handheld mode on a Nintendo Switch Lite.

Poison Control has only Japanese voice acting but I noticed a few situations where the audio levels felt off. This isn’t something I could fix with the in-game audio settings because it only happened in a few scenes where the music drowned out the voice acting. The music on the other hand is very catchy and fits the aesthetic well. I appreciate that despite me not enjoying some of NIS’ games as much as others, the music is almost always excellent.

Poison Control’s problems range from poor controls to technical issues. For a third person action shooter with the word control in its name, Poison Control plays really badly. On Nintendo Switch, it would’ve benefited considerably from gyro controls given how awful the aiming is in most situations. Poison Control has a combination of bad aiming and needlessly convoluted controls to do basic things and these add up to an overall worse experience given the performance and load time problems. Poison Control definitely felt worse the deeper I got into the story and I encountered multiple instances of freezing for a few seconds before a transition to a cut-scene. If you are sensitive to variable performance, avoid the Nintendo Switch version for sure.

Overall, Poison Control is only worth playing for fans of NIS games once it gets a price drop. It has some unique gameplay mechanics that I enjoyed but the controls during the shooting portions, regular technical issues, and lack of polish during later stages hold it back from being an easy recommendation. There are much better NIS games like Mad Rat Dead and Void Terrarium that are worth playing right now. Poison Control’s concept can definitely be better realized in a follow up that manages to fix some of these issues but it is only worth it right now for those who really enjoyed The Princess Guide and want more from the team.